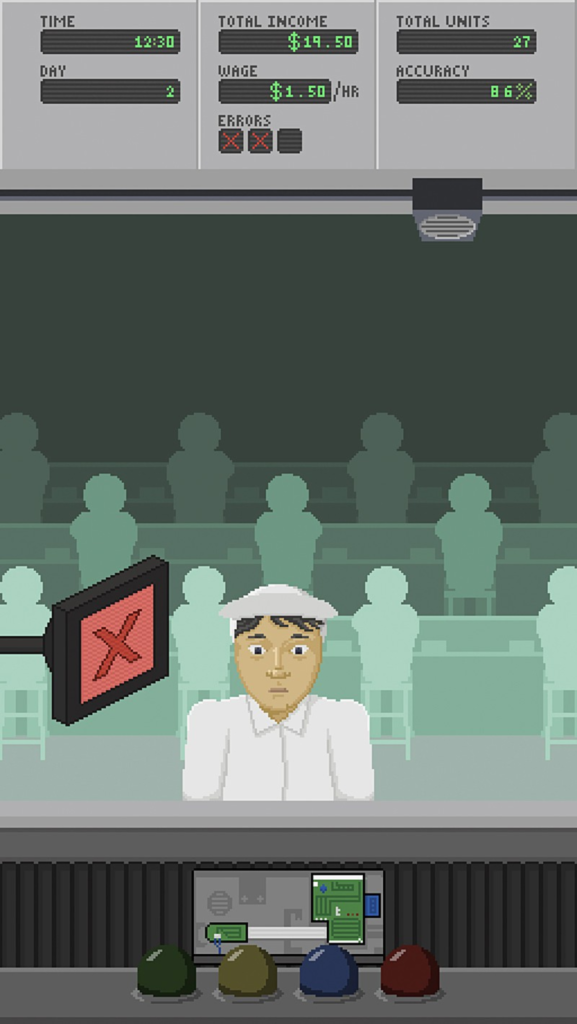 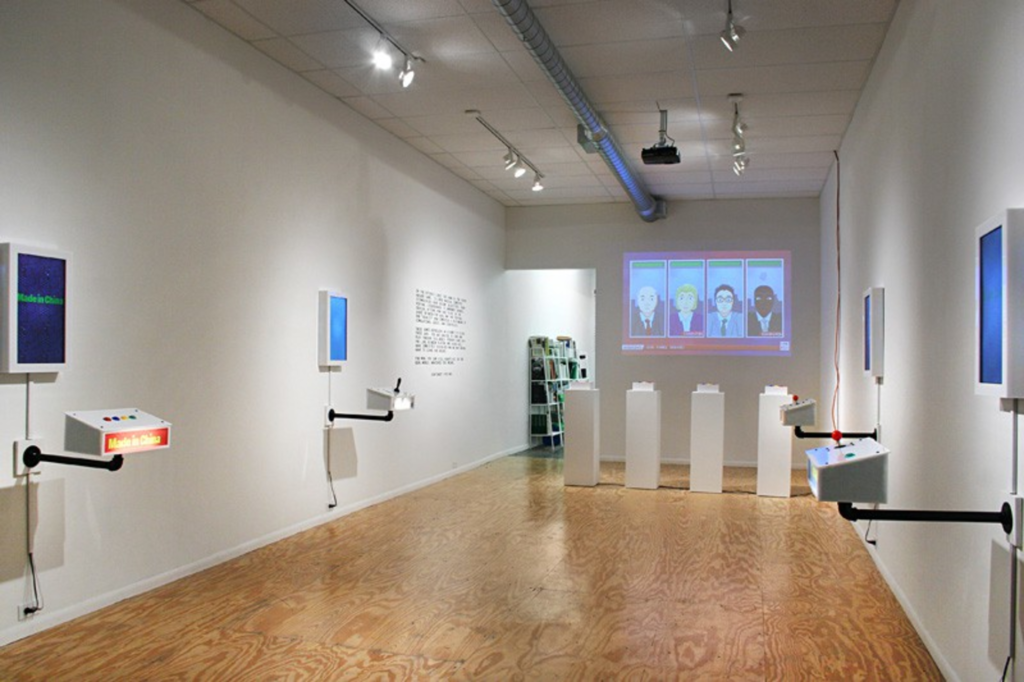 Matthew Kaney no doubt knows that paramount parental aphorism, “It’s all fun and games until somebody gets hurt.” What kids rarely hear after that warning is that U.S. capitalism may be what inflicts the damage. So says Kaney’s witty but obvious All Fun & Games, now at Plug Projects.

The five sleek, stand-alone game consoles he has built for this show present players with a set of scenarios intended to induce thoughts about sociopolitical issues such as wealth distribution, global mass production, drone warfare, digital surveillance and polarized cable-TV shouting matches. Each is white plastic, with satisfyingly large, clicky buttons and palm-filling joysticks that recall the 8-bit video games of my youth — when I had to practically stand on a chair to reach the Centipede track ball and technology’s encroachment felt much different.

Like those old-school games, Kaney’s would be more fun to play while someone else is standing by to watch. When I took my shot, I was largely alone at the gallery on a Saturday, and I found myself wishing that the works would bleep and clang at me and fill the room with arcade sounds. Instead, I could hear my own slightly self-conscious giggles.

Not that I wasn’t trying to win, but concentrating wasn’t always easy. It took a bit for me to understand, for example, that the top-hatted rich guy on the uppermost tier of “Trickle Down” was the only figure on the screen I could control. The middle-class and poor characters below him were moving as programmed, and I needed to see how many fluttering $1,000 bills I could snatch before those folks had a chance. I stayed on for a while to try harder.

The artist understands that video games can be addictive, and that compulsory behavior produces participation in our social system. In a video on the Oklahoma Visual Arts Coalition blog, Kaney (who graduated this year from the University of Oklahoma) talks about how gamers playing his works might not notice how they are being complicit in a race to acquire wealth or in doing their best as a security agent to capture cell phones and intercept e-mails. A bystander, he notes, might see through these actions more easily. (Most of us in KC aren’t about to road trip to Oklahoma City to learn about good upcoming artists, so once again Plug Projects has done us a favor.)

Players and bystanders are apt to agree with some of the ideas Kaney seems to front here — that drones are problematic or my iPhone was made by pseudoslaves or the NSA is sweeping up way too much. These recognitions of the ever-widening gap between this country’s wealthiest and the world’s least fortunate aren’t especially complex. But participating in his simple games still offers some challenges.

When you play “Made in China,” for example, you are told to follow a pattern and told you can’t hack it in the global economy if you make three mistakes in one shift. If you are at all OCD, or if you loved that 1980s game Simon, this one hooks you, makes you want to do better. In this case, scoring means making your avatar work eight hours doing the same thing over and over to produce perhaps 17 units, earn $1.50 an hour and then get told to go back to his dorm. During one of my plays, I reached Level 3: a privileged double shift to keep up with demand. I made mistakes and got fired.

“Data Miner,” the NSA-type game, proved nearly impossible for me. Maybe that’s Kaney’s point, though. His whistleblowers are really fast, and my spy had nowhere to run. I did not catch one terrorist.

Less straightforward is Kaney’s talking-heads game, “News Cycle,” in which up to four players can dispute one another using reason, attacks or outrage. I played with another person who came by, and the logic of which tactic worked against any other tactic eluded us. When I played alone against the computer as it controlled the other three media figures, the game went on for many, many minutes, also seemingly without logic. Again, though, maybe that is Kaney’s point.

Any such subtlety would exist on a level hidden below the concept of All Fun & Games, which attempts to use technology to explore how technology shapes our interactions with the world. But it’s also possible that the artist’s programming skills aren’t up to the rest of his ambitions.

The drone-strike game was somewhat out of order the day I tried it, so I could no longer see the little viewfinder that’s supposed to lead you to the bombing targets on the larger screen in front of you. Still, blowing up buildings indiscriminately was — I admit it — fun. For a minute or two. There’s still a job to do, though, which means you can’t miss important targets. The “game over” message we’ve all grown up with is just the first way any of us ever hears “you’re fired.”