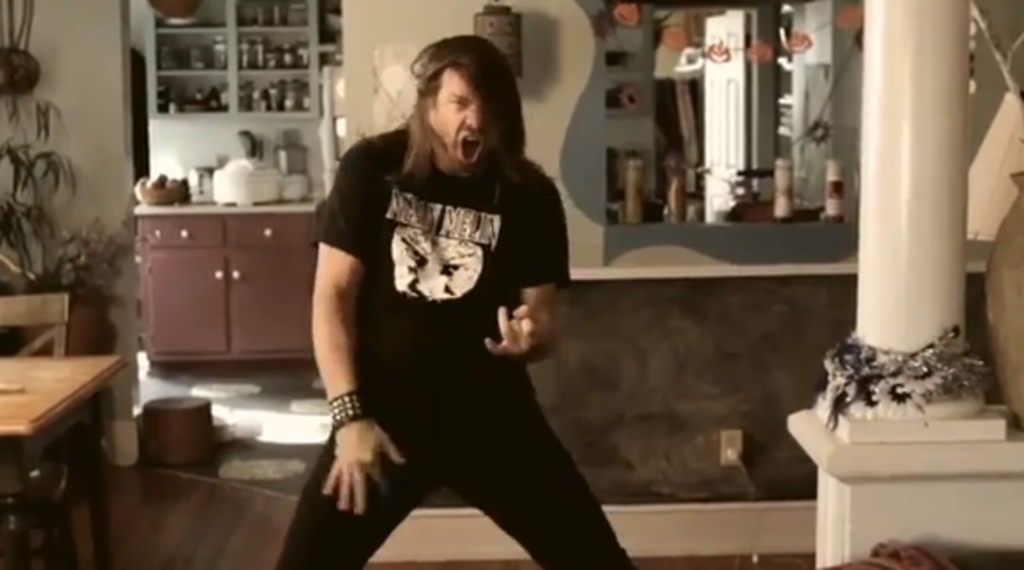 Introducing a brand-new, sparkly once-a-month blog column: Cine Local. Starting this month and continuing at the end of every month until we get sick of it, we’ll be rounding up local music video releases and blogging them right here for your viewing pleasure.

Despite the up-and-down weather we’ve had this January, there were a few artists out there being creative. Or in being creative, however you want to slice it. The Get Up Kids’ Matt Pryor recruited some local faves for his new music video; P. Morris takes on the Biebs; and Madisen Ward and the Mama Bear have a stripped-down session that will break your soul. Read on.

Matt Pryor’s new video for “Kinda Go to Pieces,” a track off his latest solo full-length Wrist Slitter, is a spectacular little salute to his hometown. The Dead Girls’ Eric Melin and everyone’s favorite local air guitar hero stars prominently, doing what he does best. The video was directed by Fourth of July‘s Brendan Costello and was shot entirely in Lawrence. Despite the song and album title combination, this number is really just four and a half minutes of feel-good vibes. Pryor plays at the Lawrence Arts Center tonight before heading out on a two-month European tour.

Producer Phil Canty, formerly known as Morri$ and now making music under the name P. Morris, dropped this atmospheric little gem just last week via his Lawrence-based Bear Club Music Group hub. Canty’s edit of “Hold Tight” is Justin Beiber like you’ve never heard him before (and probably the only way you’d want to hear him). The video features sexy, spliced-up, shifting images of model and director Alexandra Julian Moore, who is kind of obnoxiously beautiful. On February 25, P. Morris will release an original mixtape aptly titled Debut, so watch for that. (And if you really want to subject yourself to the Biebs original, go here.)

OK, so, technically, Making Movies released “Cuna de Vida” on December 28. But we figure that’s close enough to January to make it in. Anyway, this spicy song – from 2013’s A La Deriva – features a montage of live clips from the 2013 Making Movies tour. For the non-Spanish speakers, “Cuna de Vida” translates to “Cradle of Life,” and that’s pretty much where we stop transcribing the lyrics. This track is deliciously explicit, the kind of thing that makes you want to head to Panama on a whim and get tangled up in an ill-advised torrid love affair. Making Movies is celebrating its 5-year anniversary at RecordBar on Valentine’s Day.

Mime Game – Do you from Outpost Worldwide on Vimeo.

It’s pretty hard not to like Mime Game. Frontman Dillon DeVoe, formerly of the Josephine Collective, has impeccable control over his pop-crystal-perfect vocals. “Do You,” off the band’s October-released EP Do Your Work, is buoyed by a gentle harmonized chorus of bum-bah-bums and ohs and ahs – a clever lead into the song’s explosive ending. Meanwhile, in the video, members playfully make eyes and faces and the camera. For upcoming Mime Game shows, go here.

Back in October, Topeka-based R&B and funk master Reggie B released an epic full-length album called DNA. The first music video off that album is the surreal and excellent “Hypnotized,” directed by the incandescent Mikael Columbu. Reggie could not have picked a more appropriate – or talented – artist to visually interpret his music, and, true to the title, the video is utterly captivating in a strange and brilliant way.

Madisen Ward and the Mama Bear – “Live by Water” from Hydraulic Pictures on Vimeo.

Madisen Ward and the Mama Bear – “Live by Water”

Again, technically, this is a December-released video, but why ruin the fun and split hairs? Madisen Ward and Mama Bear – who is Ruth Ward, Madisen’s actual mother – are a relatively new Kansas City duo, and we officially have our hungry hawk eyes (and ears) trained in their direction. Seriously, listen to Madisen Ward’s rich-as-molasses angel vocals and try to keep your blackened, frostbitten heart from exploding with emotion. Make sure you check out the rest of the Madisen Ward and the Mama Bear’s live videos on Hydraulic Pictures’ Vimeo.

To submit a music video for consideration for next month’s Cine Local, e-mail natalie.gallagher@pitch.com. If you think we missed something, say so in the comments.