Master my thoughts? Lisa Ash helps me meditate on that idea 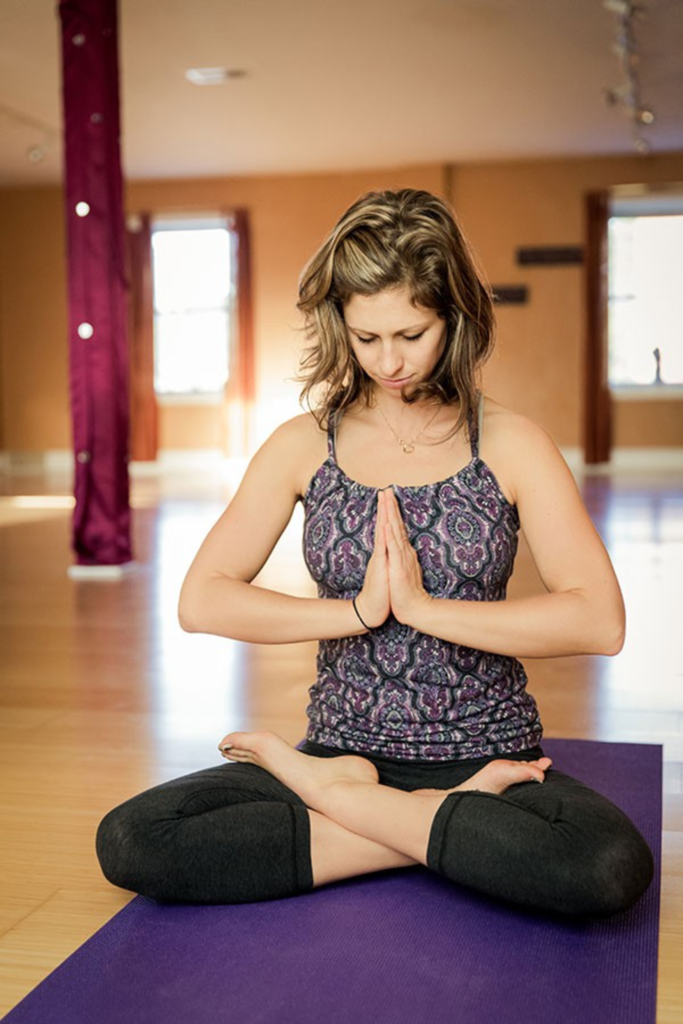 When I worked in a dreary corporate office, I used to meditate during my lunch break. I’d park my car in an empty strip-mall parking lot, close my eyes and focus on the sound of traffic whizzing down the nearby highway, trying desperately to think of nothing.

My brain would not cooperate.

Instead of relaxing, I found myself fixating on the e-mail I forgot to send, the résumé I needed to update, the money I wasn’t sure I had enough of to buy groceries at Whole Foods that week.

According to Lisa Ash, lead instructor at Maya Yoga (215 West 18th Street) and studio manager at Westport Yoga (4304 Bell), that inability to silence such distractions isn’t such a bad thing.

“Your brain is not supposed to stop,” she says. “If your brain stops, you die. You’re supposed to gain mastery over your thoughts.”

Ash is explaining this to me on a Friday morning before yoga class, the two of us sitting cross-legged on large, fluffy pillows in the studio’s office. A former first-grade teacher, Ash is always smiling, and her voice has a lyrical quality. She inspires trust that the twisting, one-legged pose she’s asking you to hold is beneficial not only to you but also, somehow, to the whole planet. I want to believe her when she says I can learn to master my thoughts.

And meditation, Ash tells me, really could be beneficial to the whole planet. By 2020, she says, depression and anxiety are predicted to trail only heart disease among U.S. ailments. Sounds right, I think, as I recall the two drivers I cussed out on the way to meet her.

The idea is that I learn to chill out mentally, and that my body chills out physiologically. “As soon as you take a breath, your adrenaline goes down,” she says.

In her own life, she has noticed that the contemplative practice has helped her control her emotions, especially anger. Unlike me, she can shrug off an idiot who, say, cuts you off in a QuikTrip parking lot. “Whatever — it’s their journey,” she says with a laugh.

This ability to let life’s bullshit slide, this whole mastering-your-thoughts thing, Ash calls “exercising discernment.” It means choosing to accept or ignore feelings as they arise — separating reality from drama without becoming overwhelmed.

“I’ve never met a person who said, ‘My goal is to be angry and frustrated and stressed,’” Ash says. “When people learn to meditate, they can learn to be at ease. At first, it’s only for maybe 30 seconds because your back hurts or your knee hurts and your brain is going, Oh, my God, I have all these things I have to do.”

Ash recommends that I attend classes to help me overcome distractions. Meditation, she says, is more complex than just sitting in one position, just as riding a bike is more involved than just pedaling your feet. It’s possible to achieve Zen on your own, but it’s easier if you have a guide.

“When you’re at home, your brain turns on, and you get up and go to the bathroom,” Ash says. “Or you go make lunch or you start vacuuming. I do it, too. When other people are there, it’s like a commitment and a support group, in a really nonjudgmental way.”

So I return to Maya the following Sunday morning for Ash’s meditation class, which by design follows a one-hour yoga class. I’ve done yoga for years, primarily to benefit my abs and my ass, but Ash has told me that the ancient practice was originally intended to prepare participants for lengthy meditation.

With the late-morning sun streaming in through the windows, 10 of us sit in a circle, our foreheads still damp with sweat. Following Ash’s calm instructions, I close my eyes and start counting each breath — inhale, exhale. As thoughts pop up, I imagine accepting or rejecting them by swiping them left or right, like pictures on Tinder.

Once, I almost fall asleep. After I snap awake, my mind starts to wander. If I were at home, this would be the moment when I give up and turn on Law & Order. Here, I close my eyes and try again. If everyone else can sit still for 15 minutes, I can, too.

Then I remember something Ash told me during our previous conversation: “You have no idea what everyone else is thinking. They’re usually writing their grocery list, too. They’re pretending to meditate, just like you are. And that’s OK.”

With this bit of encouragement, I settle into relaxation about two minutes before the timer sounds. After class, I feel good, as though I’ve woken from a midday nap — a bit dazed but calmer than when I arrived. I don’t even cuss anyone out on the way home. Ah.