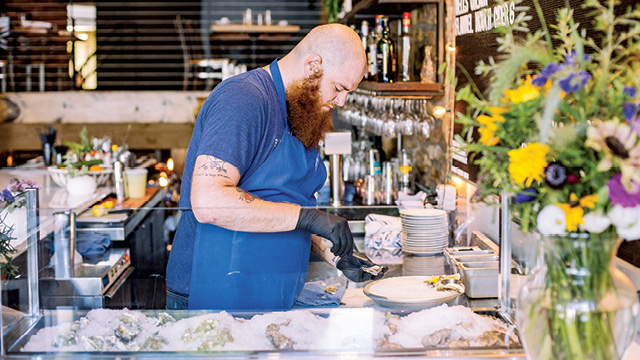 Confession: I don’t have a lot of patience for the inviolate reverence that regional authenticity is supposed to be afforded in the culinary world. I like sugar in my tomato sauce and pepper jack on my cheesesteaks. I’ve been known to eat hot dogs with — sorry — ketchup. And I don’t believe that New York City’s water contains magic bagel-boiling properties.

But until recently, I did believe in one snooty inverse of said authenticity: that regional truism dictating that one should never order crab legs in Kansas.

Fans of Mass St. Fish House & Raw Bar, an eight-month-old restaurant in downtown Lawrence, already knew better. On each of my visits to the place, its Massachusetts Street storefront buzzed with patrons clinking oyster hulls like champagne glasses, dissecting snow crabs with dedicated tools and sawing into scallops the size of their fists. If rules were being broken, these people were either blissfully unaware or happy to be seen flouting what is, well into the 21st century, an outdated convention.

Now, some of the restaurant’s traffic is owed to location. The restaurant occupies a piece of main-drag real estate that previously housed Bigg’s BBQ and Buffalo Bob’s Smokehouse. It’s not an obscure address. But since its hickory days, there have been a few stylish upgrades, and the split-level space now feels both red-state casual and blue-county cosmopolitan. Proprietor Ayrick Madeira and his staff uncovered the original limestone walls, imported driftwood-rugged tables and pews, and coated the walls in a trendy, deep-ocean blue. They added a shabby-chic showpiece, too: an enormous, diner-style letter board behind the bar that lists the craft drafts and the oysters du jour.

But it’s the quality of the fish that makes the restaurant worth a pilgrimage. Madeira, once a representative for Northeast Seafood, a Denver-based distributor, knows how fish should be sourced and shipped. Mass St. overnights oysters from the coasts and receives small, daily deliveries of fish and shellfish.

It’s also the elegance of executive chef Kealan O’Boyle’s pared-down way with that fresh seafood. Consider the composition of a dish that makes a good metric by which to judge a place like Mass St.: the crab cake. Heavy breadcrumbs and starchy fillers often mean there’s something to hide — which makes Mass St.’s an exhibitionist’s version. On my first visit, the puffy cakes were delicate and loosely formed, spotlighting generous flakes of tender crabmeat seasoned to amplify, rather than bury, the flesh’s subtle sweetness. If you’re expecting a contiguous crab croquette, you’ll be disappointed, but for my tastes the cakes had everything they needed: a brief meditation under the broiler to lightly crisp the edges, and a smear of remoulade to help forks scoop up errant crab.

Minimalists can order whole crab legs, oysters and lobster tails à la carte or sample all three in one of the raw bar’s seafood platters. You may shudder with a little sticker shock, but these are decent values. The Low Tide, the smallest and cheapest of the platters, is $30, but the portions are generous enough for a couple. The tray combines four oysters, half a pound of peel-and-eat shrimp (ruddy with old bay) and a half-pound of succulent chilled snow crab. 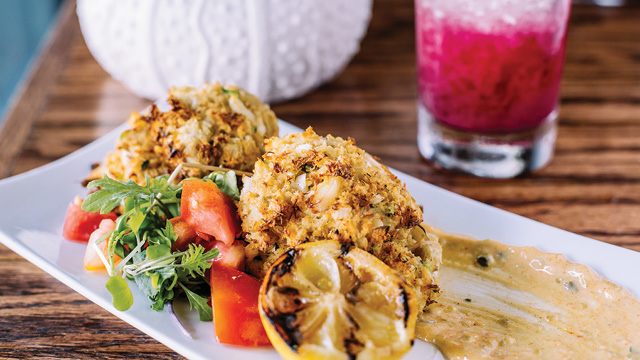 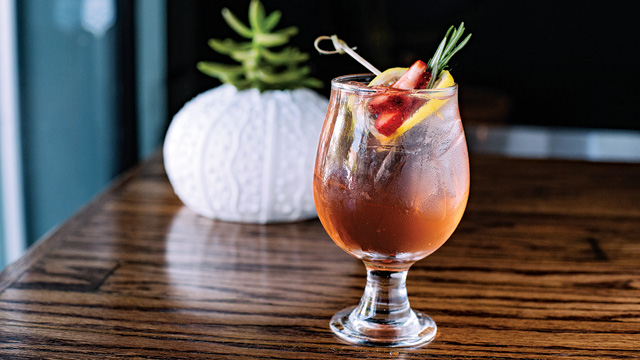 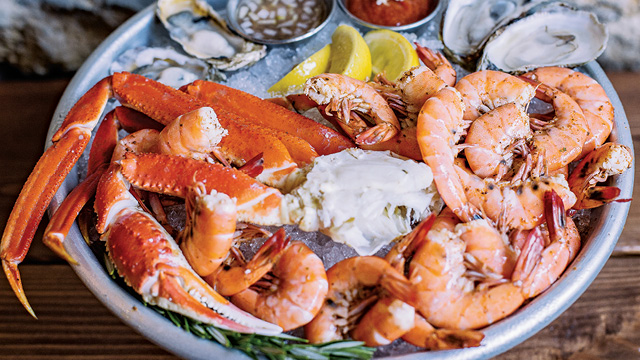 The oysters vary depending on the day, but the platters generally include both East Coast and West Coast offerings. On one recent visit, I sampled briny Chesapeakes big enough to shake hands with, and more delicate, slightly fruity Royal Miagis from British Columbia. No, the height of summer isn’t prime oyster season, but all four were clean, fresh and relatively springy. The accompaniments were slight enough to satisfy a purist — lemon wedges and wee ramekins of cocktail sauce and mignonette — but we’ve established that I’m not a purist. Some hot sauce or horseradish would round things out.

The place has a carefully chosen selection of hot entrées, all of which foreground the flavor and freshness of the fish. O’Boyle, a Lenexa native who previously worked at the Michelin starred Tru in Chicago, has a knack for delicate, finicky cuts. My table enjoyed the pan-seared Alaskan halibut, which crouched, Smaug-like, atop a small mountain of polenta. Though the polenta was a bit gluey on my visit, the fish had crisp skin, creamy flesh and a sophisticated flavor boost from sliced fennel and a sweet and smoky tomato jam. A pan-seared Idaho trout was no less skillfully cooked, accompanied by “roasted local corn succotash,” which was a little bean-shy, and lemon gastrique. (O’Boyle sources a majority of his produce from the Lawrence area.)

My favorite entrée, despite a few reservations, was one called Pork & Scallops. The dish is a pebble’s throw from perfection, exemplifying the skill (but also the caution) O’Boyle brings to the kitchen. Three pan-seared New Bedford scallops were slow-dance tender, with a velvety texture that married perfectly with the plate’s supple, fatty hunks of pork belly. The pork was treated with the same reverence as the fish: The crust was firm and flavorful, the meat juicy and rich.

But all that richness needed bolder accents. A pale-yellow purée of vegetables looked pretty on the plate but added little to the mix but a gentle sweetness. Strips of carrot lent the dish vertical bulk but arrived lukewarm and underseasoned. And I detected very little heat in the moat — supposedly butter and chili oil — ringing the meats. Amping up the spice — or even swapping out the neutral garnish of pea shoots for a more bitter or astringent herb — would push the dish the last few tiny notches to a 10.

It makes sense to be cautious about assertive flavors when the ingredients are this good. No one wants to pay an arm and a leg to not taste the fish. But when O’Boyle takes a risk, it nearly always pays off. Among my favorite examples of this is the tuna-poke starter, a stout tower of cubed, fresh ahi (marinated in soy) tossed with cucumber, stippled with black and white sesame seeds and cushioned with whipped avocado. When I sampled it, the raw tuna was soft and supple (and savory, thanks to that soy), with a generous portion of curled wonton chips providing a firm and flaky vehicle for the cold snap of flavor.

Another highlight: spiced hush puppies. The corn-and-Fresno-pepper filling was moist, with an even crumb and zero greasiness. And the pineapple-and-jalapeño relish served alongside is memorable by itself, blessing all it touches with an intricately balanced blast of fruity sweetness and radiant heat.

The budget options on the menu aren’t quite as strong. The Mass Fish & Chips looked elegant, and the beer-battered hunks of soft cod were fried to a perfect walnut brown when I ordered the dish. But the “hand-cut fries” were a slight disappointment, chewy instead of crisp — a sign they languished under a heat lamp too long.

The Oven-Roasted Crab Mac was comforting, with a flavorful Mornay sauce, generous chunks of lump blue crab, and oversized pasta shells with good chew. But the mac skews saucy and runny, not gooey or cheesy, and I longed for more Grana Padano. To go with it, our server brought a side of smoked Fresno- and Calabrian-pepper hot sauce (and told us the restaurant would begin bottling it soon). The thicker, scarlet-hued sauce added a bright and tangy finish to the mac; think of it as a fruitier, bespoke version of Frank’s Red Hot.

For now, I’d stick with the raw bar and the pricier fish plates — which the restaurant’s happy hour offers an economical way to sample. In addition to lower-price appetizers, oysters and crab legs, that menu has a few exclusive dishes, including one called Bubbles and Oysters — a dozen house oysters and a bottle of cava for $30.

The cocktails here complement the fish, skewing light and sweet. None of the drinks I sampled tasted especially boozy. Sometimes this is to their detriment — I’m thinking of a flatly sweet rosé slushy and a medicinal-tasting Seafoam Flip. (I suspect the combined punch of the matcha-infused vodka and a eucalyptus tincture is to blame in the latter’s case.)

But bar manager Samantha Waeckerle and front-of-house manager Laura Klein have more hits to their names than misses. I loved the War of the Roses, a pretty blend of Rhone Valley rosé, dry vermouth, white-peach tea and rose water. The rose flavor was present but not overly strong, and lemon and lemongrass lent the drink a more complex nose. And I’d order the Witchcraft in perpetuity if I could. The light, balanced drink combines piny Strega with lemon, soda and housemade celery-and-fennel bitters.

The dessert menu is modest, but a couple of standouts are worthwhile. Skip the layered chocolate tart — while well-executed, the cake is less interesting than the candied orange peel that dresses it. Order the goat-cheese beignets instead and hold your tongue about their authenticity. Yes, they’re less beignets than they are powdered doughnut holes, but they have a crunchy brown exterior, a tender crumb and a mild earthiness that never overwhelms.

For a true indulgence, spring for the cobbler. The version I ordered smothered a thick-puffed turnover crust with housemade vanilla gelato (criminally creamy), fresh peach wedges and plump blackberries. It’s not really a cobbler, but it’s so satisfying that even the most pretentious culinary fussbudget won’t care. Mass St. Fish House & Raw Bar — with its tulle-light drinks, elegant plating and fish that has no business being this good — isn’t for the gatekeepers. It’s pure LFK, authentically itself.

Best bet: Sip a Witchcraft from the cocktail menu, share the Low Tide with your table as a starter, and order the Pork & Scallops just for you.