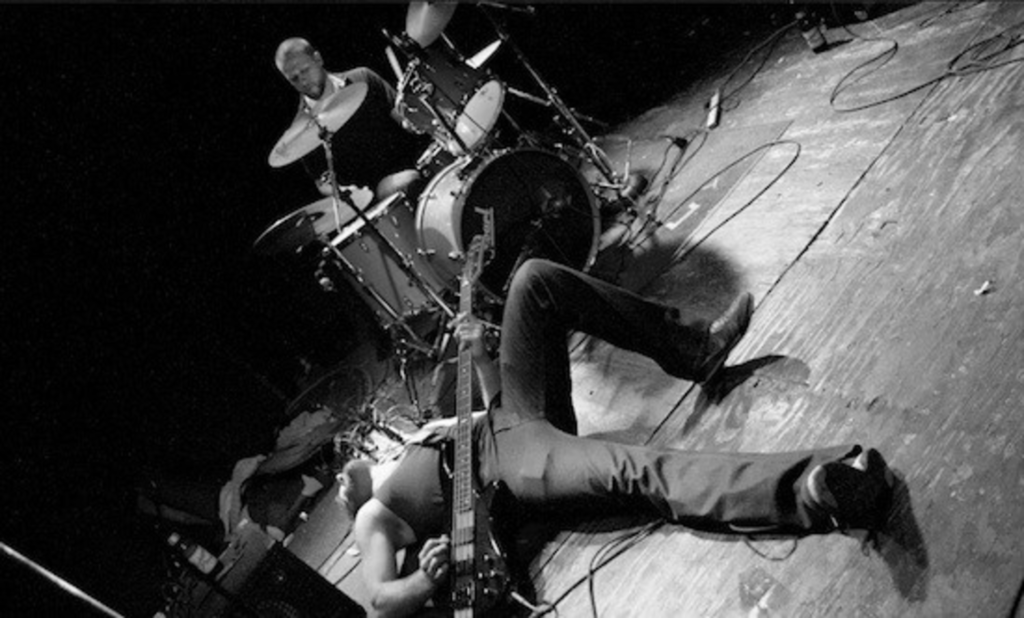 With a name like Man Bear, you might get the wrong idea about Alex Courtney’s band. His music isn’t barrel-chested, testosterone-fueled meathead rock. It’s some ear-friendly indie pop-punk, and the band’s new EP Power Slop is a five-track shot of energy.

With Courtney on guitar and lead vocals, Aaron Nickless on bass, and Keith Howell on drums, Power Slop has a fun, fast-paced, feel-good vibe. The opening track, “Rocket to Knowhere,” bursts out like an exploded soft drink, all fizzy and bubbly – messy, in a harmless way – with a kazoo-like chorus and frenzied guitar chords.

Things chill out from there, rounding out the album with a few delights and surprises (the electric guitar jam that kicks in halfway through “Sleep Forever” is pretty sweet). Some of Courtney’s lyrics beg to be shouted along to while being blasted from a car stereo; see “Oh Well, Whatever” for the touching line, “I got my shit together, but I don’t give a damn, whatever.”

Power Slop is available for download for free here. We dialed up Courtney to talk about some of the details on how the EP came together.

The Pitch: Tell me about the new EP. Give me a little background.

Courtney: We probably started working on it, tentatively, back in February. I think that’s when the oldest stuff that made it on the EP was being written. We would have had something out sooner, but I got married over the summer and moved, so that slowed us down a little bit.

How do you guys go about writing music?

I’ll usually have the core song in place, and then I’ll take it to the band, and then they’ll help me figure out how we can play that together, as a band. Sometimes I do some demos before I take it to them, because I don’t usually remember the lyrics. Usually, I have to get something more solid recorded before I take it to the guys, and then we’ll play it. They’re pretty brutal, so if it’s not a great song, they’ll certainly let me know, and we’ll argue about it sometimes before we come to an agreement.

http://bandcamp.com/EmbeddedPlayer/album=3095849130/size=medium/bgcol=ffffff/linkcol=0687f5/transparent=true/
You decided to go with a free download for this EP. Why is that?

[Laughing] Well, if you could see the numbers for our downloads, you’d know we’re not losing any money giving it away for free. To me, the recording is the most important thing, but it’s a good way to generate awareness of your band. If we give it away, people are more willing to listen than they are if they had to spend five dollars on a download for a band they’ve never heard of. Everything we’ve done so for has been free.

You guys have been together for five years. What makes this project work?

We’re all friends. I went to high school with our bass player, we played in our first band when we were teenagers. And our drummer tolerates us, so that makes it easier. We all get along… we all like the same bands. Different albums by the same bands. [Laughing] We’re all pretty dorky guys. You know, we’re just trying to have fun with our music, and hopefully people like that.