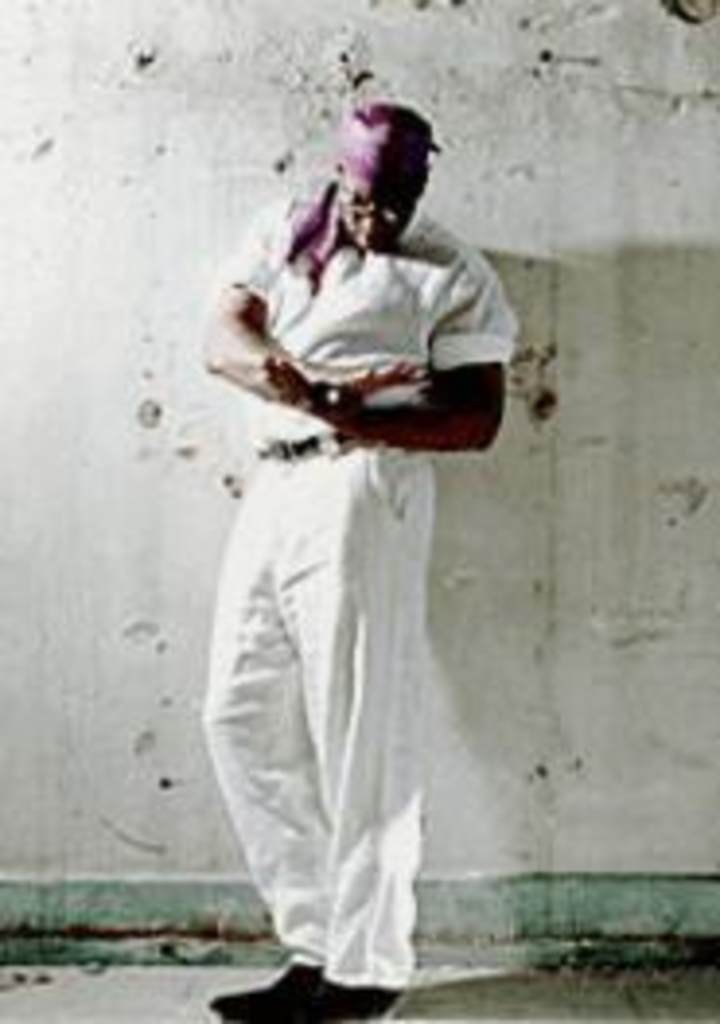 Sometimes it’s funny how life can twist and turn, shaking down dreams along the way. For the Kansas City-bred and Los Angeles-based singer and percussionist Vinx, the highs and lows of that meandering path have been plain spooky. At one time, in the late ’70s, it looked as if Vinx were destined for Olympic greatness, having made the world’s second-longest leap in the triple jump while he was a track star at K-State. Vinx easily qualified for the 1980 Olympics in Moscow, only to have that dream thwarted by a political boycott of the Games.

Dejected but undeterred, Vinx threw his energies into music, his other passion. He was confident enough to take his band to Switzerland’s Montreaux Jazz Festival — uninvited — where the group expected to play some small shows nearby. But a funny thing happened on the way to being another peripheral act at Montreaux: Vinx and his band crossed paths with a little performer named Taj Mahal.

“Taj heard us playing and came up after the set and said he wanted me to play with him, which was a little intimidating,” Vinx recalls. “I asked Taj what he wanted me to do, and he said to play what I wanted to play. So I played what I knew and had a great time.”

But old dreams die slowly, and Vinx was still hanging on to the prospect of competing in the next Olympics, in which he was pretty sure the United States would compete because the Games were being held in L.A. Unfortunately, to paraphrase Christina Aguilera, Vinx’s mind was saying “yes,” but his body said “hell no.” An injury at trials for the ’84 Olympics took him out of the triple-jump competition for good. But Vinx remained in L.A. after the trials to personally train the tanned (George Hamilton), talented (Stevie Wonder), rich (Steven Seagal) and sorta-famous (Marisa Tomei) — all the while keeping his musical skills honed anticipating the big break for which most young Angelenos seem to be waiting. Vinx’s finally came as a guest performer on noted R&B tenor saxophonist Ernie (Chariots of Fire) Watts’ Grammy-winning 1985 Warner Bros. release, Musician.

From there, Vinx has gone on to play with an adult-contemporary A-list, performing or recording with Sting, Stevie Wonder, Kenny G. and Sheryl Crow (and with the dropout Spin Doctors). He has also earned jazz props guesting with Herbie Hancock and Branford Marsalis and filling the bill between Miles Davis and Wayne Shorter on his return to Montreaux. Tastes of most of these performers turn up in Vinx’s music today, but when you ask him for his greatest influence, the answer is easy: none of the above.

“My father was my biggest musical influence,” he says without hesitation. “He was a great singer, a professional amateur, but he stopped to raise a family, so I live with his great disappointment. That’s one of the things that motivated me to give it a shot. I didn’t get my record deal until after he died [from injuries suffered in a 1989 armed robbery], and that’s unfortunate because I really wanted to get to do something with him.”

Of the list of ‘superstars,’ I would say Stevie Wonder, Taj Mahal and Herbie Hancock were huge influences, and I guess you could include Sting too, just because of his Royal Stingness,” he continues. “But my music is so strange, it’s hard to pinpoint anyone as a singular force.”

Except maybe Vinx himself. To be sure, he came away from each of these talents with valuable musical lessons in hand, like his effortless maneuvering between sex and politics (à la Stevie Wonder) on jams so smooth they sound as if they could’ve come from Brian McKnight. But more important than any tip picked up from his array of accomplished co-performers, Vinx taught himself a thing or two about the industry and what he really wanted to get out of it.

“Playing for 60,000 people was still pretty cool when I was young and it was the Sting audience,” says Vinx of his musical awakening. “It wasn’t until I did the fifteen-year-old pop crowd with the Spin Doctors and had kids calling me ‘bongo dude’ that I realized that people weren’t really there for the music.”

Ah yes, the age-old mantra of the misunderstood artist — except Vinx, as an artist, isn’t really that misunderstood. He just happens to make deeply soulful songs that don’t fit what radio programmers and record execs believe “urban” audiences want. Certainly Vinx understands what his audience wants. “I like to make records where, you know, maybe I can help the guys out a bit. ‘Cause sometimes the date ends sooner than you want it to, and maybe they can put that record on and still have a chance to get a kiss a little later.” Vinx just happens to express this notion with a little more class and tact than, say, R. Kelly singing “Feelin’ on Your Booty.”

Which brings us back to his dream. “I don’t want to be a ‘household name’ anymore,” Vinx says. “At 43, I’m happy having a sustained career, and I’m not hung up on thinking I’m not a success if I don’t sell 20 million records. I like just going in a room and being able to sing if I want to, and I would rather do what I get to do now and play for 200 people that are there feeling what I’m doing and are ready to experience this intimate, magical feeling — as opposed to doing that 60,000-person crowd-control gig — any day.”