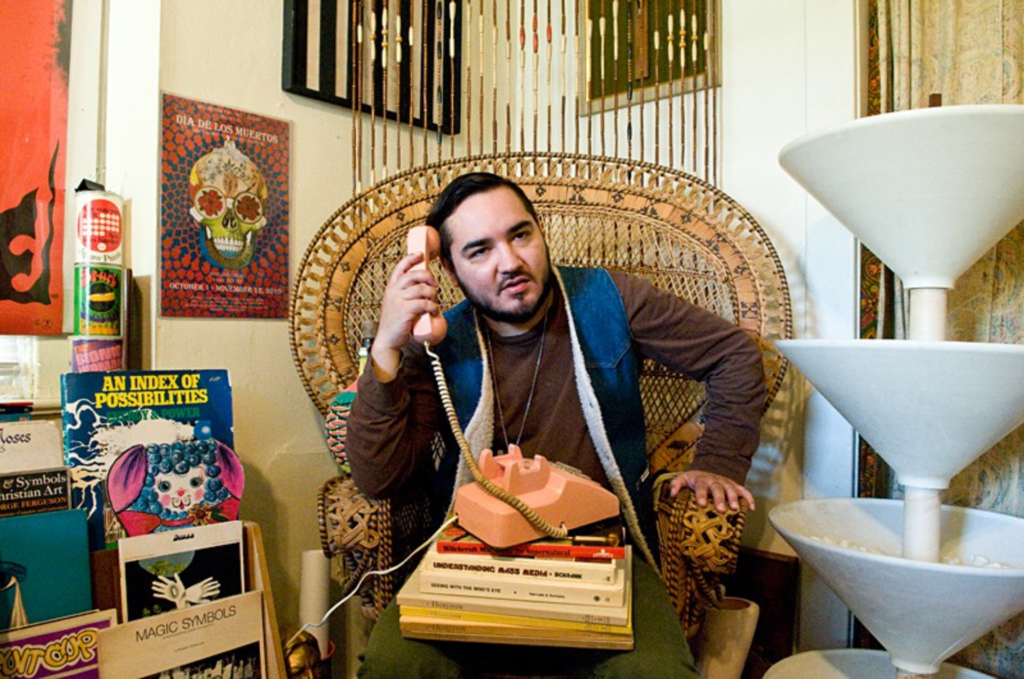 If there was a job title that could neatly sum up what Luke Rocha does, it might be dime-store mystic. The artist resurrects discarded images and objects and breathes new life into things that other people have tossed out. As for the word mystic, what else but some higher plane of consciousness must be guiding Rocha’s odds and ends from secondhand shops to their true destinies? (In any case, dimestoremysticism.com is his URL.)

Along with Anne Austin Pearce and Marcus Cain, Rocha exhibits his work at the H&R Block Artspace. The Charlotte Street Foundation this year awarded the three artists $10,000 each — no strings attached — after a jury of art professionals selected them as the 2012 Visual Artist Award Fellows.

This financial support has freed Rocha to attempt more ambitious work. “I’ve been working on a few installations and an audiovisual project involving VHS clips and a vinyl-sampled score,” he says. “No computers are used, just analog equipment. Essentially, it’s a 30-minute music video.”

Rocha’s music video (search for ” ‘Analog Apache’ by Your Reflection” on YouTube) overlays synesthetic pulses of light atop retro footage of recording equipment. His sculptures combine some of the salvaged consumer remnants — suitcases, flags, candles, candy dispensers — into assemblages that look like altars to idiosyncratic deities.

Sculpture like this, Rocha says, is his new passion.

“Over the years, I’ve become more interested in building things,” he tells The Pitch. “I enjoy driving around searching for raw materials and letting the work slowly build itself.”

To make his collages, which were on display over the summer in the 2012 Kansas City Flatfile at the H&R Block Artspace, Rocha mines vintage publications for material, selecting images seemingly more for their uncanny qualities than for their ironic nature. Spiritually tinged symbols such as crucifixes, eyeballs, feathers and crystals populate his entire body of work.

Rocha has no formal artistic training. He credits family, in particular his courtroom-artist father, Pat, for inspiring his path. “Although our art is completely different,” he says, “we share the same drive and passion for rare books and music. That ends up surfacing in our art.”

Regardless of how disparate the images and objects in Rocha’s Charlotte Street Award artwork, all of it shares a singular, almost mystical power: It convinces the viewer that what’s on display was meant to go together.

The Charlotte Street Foundation’s 2012 Visual Artist Award winners were narrowed from a field of 125 applicants living in five counties in the metro. Ten finalists had in-person studio visits in early February, and Anne Austin Pearce, Luke Rocha and Marcus Cain were awarded for both the quality of their artwork and their works’ relevance to the culture.