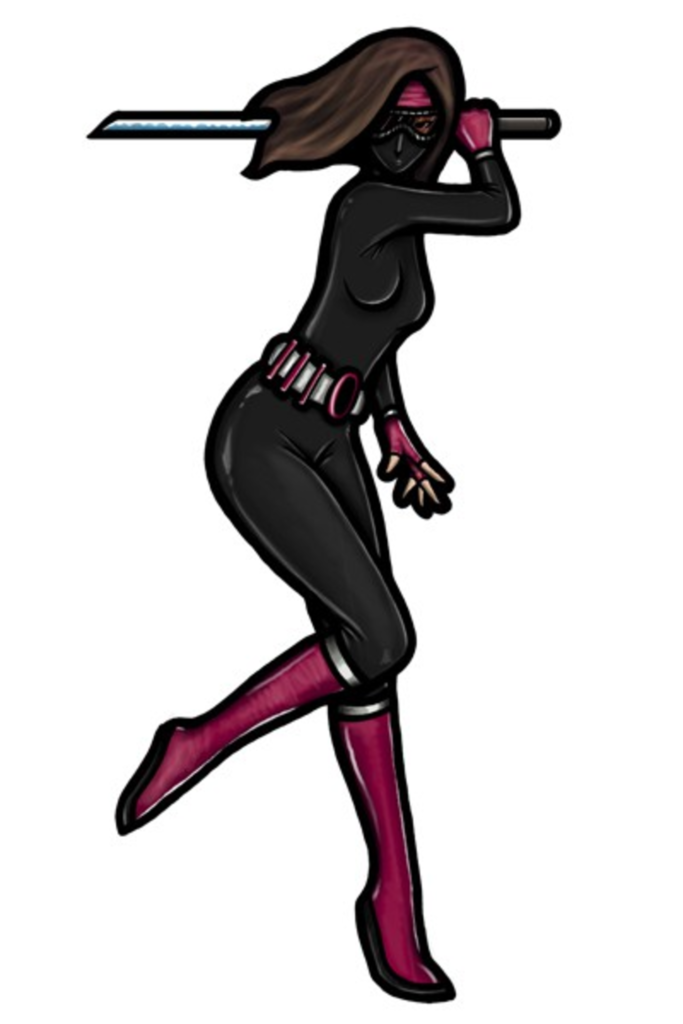 Who knew Kansas City, Kansas, was a Triple-A farm club for superheroes? According to the World Superhero Registry, a woman crime fighter named Nyx guards the streets of KCK. But she’s about to go to the show: New York. (Staff writer Justin Kendall posted a video of Nyx along with his May 7 Plog entry about her.)

It figures that our metro isn’t big enough for Nyx — she already has been three other people. She first called herself Hellcat, then Felinity and then Sphynx. Now she’s Nyx, named for the Greek goddess of the night, a beautiful and powerful but shadowy figure who gave birth to the gods of sleep and death.

“I am Nyx, masked protector of the night.

“Like the night, I cannot be proven or disproven to certain degrees; and also much like the night, when morning comes there will be no trace of me.

“It’s impossible to define but I feel a certain degree of loyalty to every being that inhabits this earth, a compulsion to watch — to help — to protect.

“I respect all RLSH [Real Life Super Heroes] of every sort, it’s not an easy life we’ve chosen but we’ve chosen it nonetheless.”

Nyx is a member of a superhero group called Vixens of Valour. (That’s the Queen’s English version of valor, not chicks in velour costumes. How disappointing.) Apparently, she’s also vice president of the Heroes Network and a member of the Signal of Light Foundation. No word on whether she’s a superfriend or a Rotarian.

Nothing in her bio suggests that she has found an archenemy, something every hero needs. If she can’t find one in New York, she’ll have to hang up her cowl. No, creditors who chase you out of the Big Apple and into your parents’ basement don’t count.

But the Dough Still Isn’t Rising

RiseUp, the ill-fated newspaper insert devoted to matters of diversity, has found new life on the Web.

Staff writer David Martin noticed last week that RiseUp was throwing a housewarming party at its new online home, with a five-story blitz. The magazine’s mission, according to its Web site, is “to engage the American public in a conversation about race, ethnicity, and culture, in order that we might come to a greater understanding of and respect for each other.”

Most conversations about RiseUp involve failure and lost money, though, with founder and publisher Janice Ellis and The Kansas City Star (among other papers) unlikely to achieve greater understanding of and respect for each other.

After much fanfare, the print version of RiseUp appeared in Sunday newspapers across the country in 2008 — then ceased publication after six weeks.

Writers and newspaper groups have gone after Ellis, looking to recoup their lost investments. The plaintiffs include The Kansas City Star, which has filed a claim against RiseUp‘s parent company, EMMG, seeking $2.2 million. Ellis blames the economic downturn and the challenges of modern newspaper publishing for the print product’s short life.

Ellis, who ran for mayor of Kansas City, Missouri, in 2007, headed the local nonprofit Partnership for Children before taking on politics and publishing.

The new online version of RiseUp is published by a business that Ellis incorporated earlier this year. Initial stories on the site include a description of what it’s like to be Hawaiian (“When most people think of the Aloha spirit, they think golden sand beaches”) and a 487-word assessment of new GOP chairman Michael Steele.

If e-publishing doesn’t work out, Ellis could always run for mayor again. One of her campaign’s billboards continues to loom over midtown.

What’s the going rate for a 6-year-old’s arm these days? About $2 million, depending on who in the family is asking.

In another of Martin’s Plog posts last week, he noted that the mother of a girl who lost an arm in a boating mishap had accepted a $1.9 million settlement, according to papers recently filed in Jackson County court.

The girl was using a rope to move from a boat to a personal watercraft when another child grabbed the throttle of the smaller vehicle and accelerated. The rope severed the girl’s arm, which sank in the unnamed body of water.

The girl’s mother filed the lawsuit last month, and the parties quickly settled. The defendants had no interest in dragging out the matter. Why? They are the girl’s father, uncle and grandfather.

Court papers indicate that the defendants’ insurance companies agreed to pay $1.9 million. The plaintiff and the defendants all reside in suburban St. Louis. (We’re electing not to publish names; the girl, now 8, has been through enough.)

A personal-injury lawyer tells The Pitch that it’s not at all unusual for family members to bring liability claims against one another. “At the end of the day, we buy insurance in case we screw up,” the lawyer says. And given the time we spend with friends and family, our screw-ups stand a good chance of injuring a loved one.

To guard against greedy parents, Missouri law requires that money from such settlements stay in the bank until the child turns 18 or until a trustee is appointed to approve payments. In the latter instance, expenditures such as food and shelter are not reimbursable because parents are obliged to provide those things anyway.