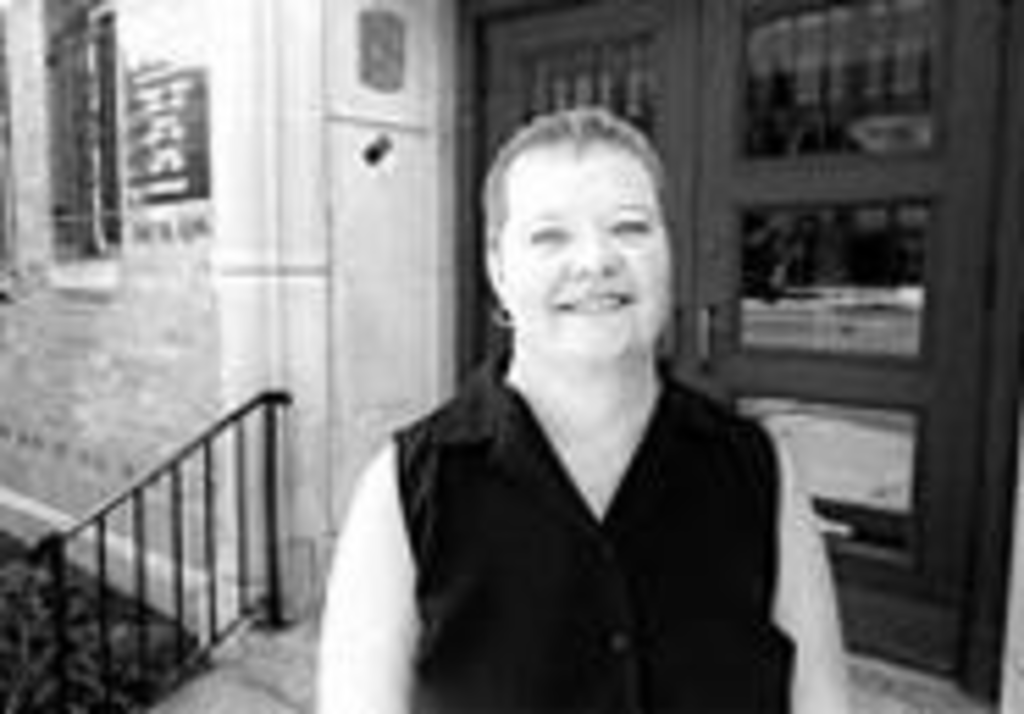 It’s Sunday morning at Pleasant Valley Baptist Church in Claycomo. Two police officers direct a stream of traffic onto the church campus, where crisply dressed families hurry from Sunday school into the sanctuary.

Smiling ushers assist worshippers to their places in the 1,800-seat auditorium. On any given weekend, 3,500 people attend Pleasant Valley Baptist Church’s three services. This morning, at least a thousand rise and sing joyously with a fifty-member choir and a small orchestra.

There are no jeremiad sermons at this sleek church. The Reverend Vernon Armitage, relaxed in khaki pants and an open sports jacket, sits on a stool to deliver a lesson on leadership. Soon it’s time for a closing prayer and exhortation to those who do not yet know Jesus.

“If you die in that state,” Armitage says, “you’ll go out into eternity alone. Without your loved ones. Forever.”

Trey Miller remembers the chill such words gave him as a child. During a Sunday school class at his family’s Baptist church in Kansas City, Kansas, a teacher told the kids that all who were forgiven could enter the kingdom of heaven.

“Except for homosexuals!” a student piped up. By that time, the ten-year-old Miller knew that he was attracted to males. “That made me feel very alone,” recalls Miller. “I learned through the church that [being gay] was not okay.”

Pleasant Valley is making sure that message is heard in Kansas City. On June 22, during Gay Pride Month, the Southern Baptist church will bring Love Won Out to Kansas City. The touring conference, presented by Dr. James Dobson’s Focus on the Family of Colorado Springs, promises to “enlighten, empower and educate participants on the complex issues surrounding homosexuality.”

According to Love Won Out’s “experts,” gay men and lesbians suffer from spiritual and sexual “brokenness” but can return to their true heterosexual natures if they pray hard enough, believe strongly enough and delve deeply into the “causes” of same-sex desires.

Gay-conversion therapies are not endorsed by the American Psychological Association, which removed homosexuality from its list of mental disorders three decades ago. Yet the agenda for the Kansas City conference reads like a 1950 psychology textbook: “Family Dynamics That Can Lead to Same-Sex Desires,” “Common Personality Disorders Seen Amongst Lesbian Strugglers,” “Prevention of Male Homosexuality.”

Love Won Out’s statistics report that only 8 percent of attendees at a typical conference are, or were, gay. The majority (46 percent) are family members and friends of gay or formerly gay individuals. For this audience, Love Won Out’s speakers paint a sinister picture of homosexuality, based on selective “studies” and information gleaned from the lives of “broken” people who submitted to conversion therapy.

Joseph Nicolosi will give his “Prevention of Male Homosexuality” presentation at Pleasant Valley. He alerts parents to watch for the telltale characteristics of boys headed for homosexuality: effeminacy, fascination with female cartoon characters and a sensitive, fussy temperament.

Without parental intervention, Nicolosi claims, a boy with such traits is potentially gay and destined for a life of alcohol and drug abuse, anxiety, suicide attempts, promiscuity, group sex, sadomasochism and “the more exotic forms of sexual activities.”

Such stereotypes anger and bewilder those who disagree with Focus on the Family’s message. The Reverend Sally Haynes of Trinity United Methodist in Kansas City says she has ministered to men and women who did their best to turn straight but ended up “battered and bruised” by ex-gay ministries.

“I have seen some very good people who believed this stuff and wanted to be healed but were hurt by it instead,” Haynes says. “A lot of people grow up in church hearing that being gay is a sin, but if they pray hard enough, they can be fixed. Then it becomes a deeper sin because they can’t change.”

Janet Elliott, 37, knew for ten years that she was attracted to women when she sought counseling in 1998. She was a Southern Baptist, a born-again Christian, who had been a missionary.

“I hadn’t acted on [my attraction], and I hoped it would go away if I continued to be a godly person,” recalls Elliott. “But thoughts of having a romantic relationship with a woman were not going away.”

A counselor suggested that Elliott attend “Living Waters,” a support group for people who think that God doesn’t want them to be gay.

“I wanted to talk about, if this is so unnatural and abnormal, why is this something I cannot overcome?” says Elliott. “But everybody wanted to come and confess the bad things they did. They all seemed depressed to me. The group made me depressed.”

After four or five sessions at Living Waters, Elliott never returned. As she continued seeing her therapist, she began to understand that her attraction to women was a part of herself that didn’t need to be fixed.

“I decided, ‘I need to go out and talk to other people who are attracted to women and see what I learn from that,'” says Elliott, who began attending Unity Temple on the Plaza, a gay-friendly church. “All I had been exposed to was people who saw it as dysfunctional and abnormal. I began meeting people who were attracted to [people of the same sex] and were comfortable with that about themselves.

At meetings of the support group Parents and Friends of Lesbians and Gays, Elliott met straight people who tried to accept gays without expecting them to change.

Pleasant Valley Baptist Church has its own support group, Under His Wings, set up to help people understand and love people “involved in homosexuality,” which the group’s brochure refers to as a “form of bondage.”

Yet church leaders are oddly reluctant to disclose why they’re bringing the Love Won Out conference to town.

In fact, Associate Pastor Jim Danielson claims that his church is merely providing a facility for Focus on the Family’s conference, which generally draws between 700 and 900 attendees. However, Focus on the Family told the Pitch that “residents in Kansas City with connections to the Pleasant Valley Baptist Church” had invited the Love Won Out team to “share another perspective on homosexuality.”

“I don’t think we have an official stance [on homosexuality],” Danielson says. “I think the Bible teaches it’s a sin.”

Focus on the Family’s official stance is much clearer and is buttressed by the peculiar story of John and Anne Paulk, as told in their book Love Won Out. The autobiographical book explains “how God’s love helped two people leave homosexuality and find each other” and reveals the struggles of John and Anne before they left homosexuality. John was a drag queen, prostitute and alcoholic. Anne had shared tentative, guilt-ridden caresses with other confused Christian women at college, always inhibited by what she perceived as the watchful eye of the Lord.

John will bring his conversion story to the Kansas City conference. He and Anne met at one of Exodus International’s live-in ex-gay programs.

Exodus’ house leaders schooled the former lesbians in the ways of “normal” womanhood. “You all walk like men,” one of them sniped as the women practiced taking dainty steps. One of the program’s fashion-conscious ex-gay men helped Anne select a tasteful pair of pumps for church. Church ladies applied makeup and instructed the women on “proper” clothes to wear. These boot-camp mentors urged them to cast off the “masculine protectiveness” they had used to hide their vulnerability.

Eventually, Anne asked John out on a date. Their newfound heterosexual love blossomed, and the couple married in 1992. In 1998, they were featured on the cover of Newsweek. Two years after that, John Paulk was caught hanging out at a gay bar in Washington, D.C.

A few weeks later, he admitted in a radio interview with Dobson that his recent gay-bar venture had actually been his second in six months.

“You know, dealing with the gay agenda and everything I have to deal with at Focus, I wasn’t managing my stress well,” Paulk told Dobson. “I walked right into Satan’s trap.”

But today, John Paulk manages Dobson’s Homosexuality and Gender Department. Focus on the Family declined to grant an interview with Paulk or other Love Won Out organizers.

As the conference nears, other churches in Kansas City have banded together to offer alternatives to Love Won Out’s message. Their group, Love Welcomes All, plans to purchase an ad in The Kansas City Star before the conference and conduct a peaceful protest at Pleasant Valley Baptist Church the morning of the conference.

That misery can lead gay men and lesbians to any number of conversion methods. Mark Hayes, a 49-year-old composer of religious music, went to a local group called Second Chance when he was 37 years old.

The group studied books that explained that gay men hadn’t gotten their needs met by their fathers, yet Hayes’ father was a demonstrative and affectionate man. After three years, Hayes quit looking for a cause.

“I finally prayed, ‘God, it just seems like this is who I am,” Hayes says. “‘I’m gay. Are you sure you didn’t create me this way?'” Today, he is in a committed relationship with a man and devotes his creative energy to composing music instead of hiding so much of who he is.

Trey Miller, who had been scarred by the Sunday school lesson that homosexuals could not enter heaven, tried throughout his teens and early twenties to change his sexual orientation. At age thirteen, he attempted suicide after being teased repeatedly at school about being gay. In college, his dates with girls consisted of deep conversation and the occasional tepid kiss.

No matter how hard Miller prayed, his attraction to men wouldn’t go away. Like Hayes, Miller began to question whether there was any cause to the way he was. Leaving homosexuality is a lifelong struggle, leaders at Second Chance told him. Finally, Miller decided that all the second chances in the world wouldn’t change who he was.

“I thought, ‘If I’m going to be eighty years old and still have this internal struggle, I’m going to have lived a miserable life,'” Miller says. “What if I married a woman and had kids with her and down the road decided I can’t live this [heterosexual] life? I didn’t want to have to put a potential wife and children through that.” Miller got involved with the Heartland Gay Men’s Chorus and met gay Christians whose lives mirrored his own.

“I only knew four or five people in that Second Chance group,” Miller says. “Some were miserable. It was a pretty depressing group.”