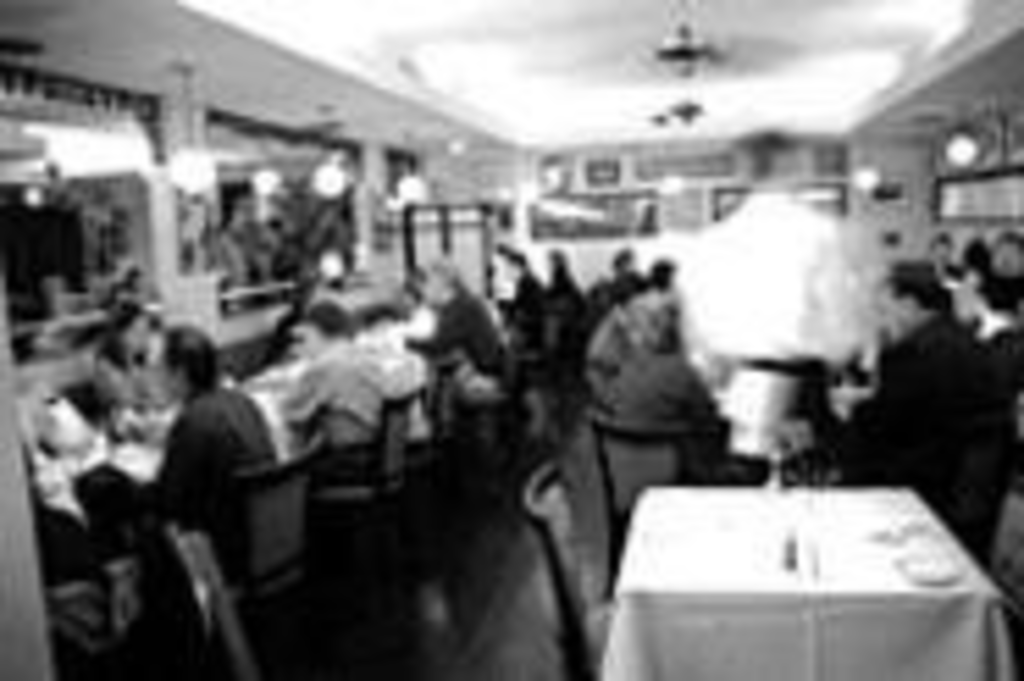 If only life could be like a French romantic comedy. Wouldn’t it be delicious to wake up one morning, rub your eyes and peer out your bedroom window at — voilí! — the Eiffel Tower? And to see, standing at your bedroom door, a towel-clad movie star (perhaps Audrey Tautou or Gregoire Colin) holding a steaming cup of espresso? Alas, Kansas City may have been settled by French fur traders, but the distinctive saveur français of their pioneer cooking has vanished over the past 170 years. Instead of la Tour Eiffel, we have a Hereford cow atop a tower overlooking the West Bottoms, the very place where those heavy-drinking French trappers once lived. Even though our Folgers plant roasts beans for a decent brew — including a French Roast — Cowtown will never be Paree, baby.

And yet, a few blocks north of the Folgers plant, a restaurant called Le Fou Frog has all the components of a sexy French film — an attractive cast, a dimly lit and seductive setting, lively music, moments of dramatic tension (Marseilles-born chef and owner Mano Rafael is notorious for banning customers who irritate him) and high comedy (the same banned customers often try to wheedle their way back in).

Even the back story has cinematic potential. Barbara, a pretty Kansas City actress in New York, gets a job as a bartender in a French restaurant owned by two volatile Corsican brothers, Mano and Jean-Roger. Mano and Barbara fall in love, but Jean-Roger dislikes Barbara. To ease the tension, Mano fires Barbara. “It was just like the Beatles,” Barbara recalls. “I was Linda Eastman, and Jean-Roger’s wife was Yoko.” The partnership ends. Mano and Barbara get married and move to Kansas City. And that’s just Act One.

Act Two might be called “The Creation of Le Fou Frog.” “The translation is wrong, grammatically, but it means the crazy Frenchman, because that’s the dismissive term the English use for the French — frogs. And in our case, that crazy Frenchman is Mano,” Barbara explains.

Mano’s legendary temper has frightened some customers (it’s the intrepid diner who sends a dish back to the kitchen), but the restaurant’s fans are a loyal congregation, even those who have been excommunicated. “We always let them come back,” Barbara says. “Except one,” she adds cryptically.

The Rafaels installed their restaurant — at age seven, it’s now the oldest French restaurant on the Missouri side — in a former River Market bar, The Red Front, because Mano and Barbara had an instant rapport with the building’s owner, Joe Mandacina. “He looks just like our honorary grandfather,” she says. To create a Parisian-style bistro, the old tavern’s grubby interior was gutted and replaced with a full bar and candlelit dining room, complete with white-cloaked tables and a rotating gallery of locally painted artworks on the walls.

“This group looks like they’re the paint-by-number variety,” said my acerbic friend Ned with a shudder. Ned is on the verge of being banned from the restaurant (he’s apparently thrown a few nasty scenes at the bar over the years), and he noted that the restaurant’s manager, model-handsome Tony Glamcevski, wouldn’t come to our table to greet him. “He’s mad at me for some reason,” Ned said, cradling a glass of Pinot Noir. “But that’s one of the reasons I adore this place. It has a very louche quality, you know.”

Louche? The French word meaning of questionable character? The restaurant may be located in a slightly louche neighborhood, but the cozy dining room has been the playground for Kansas City’s A list since it opened. Even at the bar’s rowdiest moments, there’s typically a contingent of starchy Old Money in the dining room, pretending to be bohemian while pulling out Platinum American Express cards.

The clientele varies from night to night, as does the mood. “It’s like having a party every night,” Barbara says. “The chemistry comes from who shows up and who doesn’t.”

I played a little chemistry experiment myself one night, dining with my socialite friend Marilyn and laid-back jazz singer Queen Bey. The women got along famously once Marilyn nixed the tiny booth that had been selected for us (“Darling, that table isn’t big enough for my purse,” she growled at the hostess) and insisted that two small tables in the center of the room be pushed together. Our dark-eyed waiter — “Honey, he looks just like Rob Lowe,” Queen Bey cooed — fussed over the duo as if they were royalty. Both ladies behaved accordingly.

Happily, the food from Mano’s kitchen is fit for, well, queens. (On that note, bitchy Ned himself still raves about the cassoulet, heaped with thick chunks of garlic-lamb sausage.) Even Marie Antoinette would have lost her head trying to choose from the two menus. There’s a paper handout listing hot and cold appetizers, salads and four standard bistro dinners (including cassoulet and bouillabaisse), but the “real” menu is written on a narrow chalkboard. The latter squeezes as many as twenty different daily specials onto the board in such a dainty printed hand that I longed for a telescope. The specials were hieroglyphs to my nearsighted dinner companions, so I attempted to read each dish aloud, with unintentionally comic results.

“Did you say something about duck?” asked Queen Bey. “I’ll have that.”

I could say a lot more about that duck, too; it was the best roasted fowl I’ve had in a long time, fragrant with cloves and cinnamon, star anise and juniper. The mahogany skin crackled, and the flesh was moist and gorgeously tender. We shared the dish, just as we had shared a fat, delectably crunchy crab cake — which came floating on a buttery, sable-colored sauce lightly flavored with a hint of horseradish — and a massive bowl of shiny Prince Edward Island mussels (enough to feed three) steamed in white wine and cream with just a hint of brassy mustard. All three of us greedily devoured a tower of tender langoustine perched on a salad of cool mango and roasted red peppers.

Marilyn had chosen appetizers as her dinner: a bowl of salt cod whipped together with potatoes, garlic and olive oil (it looked like wallpaper paste but tasted divine) and a crêpe filled with tiny, moist sea scallops and sautéed spinach. I refused to share my dinner, a poached rabbit loin stuffed with creamy Boursin cheese, spinach and slices of surprisingly robust oyster mushrooms, then pan-seared and sliced into delicate circles. It was delicious and as elegantly arranged as a Renoir canvas.

On another night, I returned with my friend Bob in tow, and we dined as sumptuously as any of the Bourbon kings. We began with a plate of pan-seared sausages and bread, then dipped even more bread into the melted garlic butter that accompanied the plump baked escargot (after we’d plucked them from their shells and devoured them tout de suite). We could have stopped right there, but we went on to accept the challenge of that night’s beef special, a hunk of juicy strip steak prepared Argentine-style: grilled with rock salt, lots of garlic, fresh rosemary and thyme, and served alongside a heaping mound of crispy pommes frites. It was my idea of a diet meal, something moderate and light before tackling several of chef James Landis’ breathtaking pastries: airy puffs of profiteroles bursting at the seams with vanilla ice cream and drenched in bittersweet chocolate sauce, a fluffy mound of cinnamon-scented bread pudding, a silken crème brûlée delicately flavored with lavender and tucked under an amber shell of caramelized sugar.

But how does one choose between a dense, rich slice of chocolate terrine or a satiny chocolate mousse? I’ve tasted both, and they left me as dizzily entranced as one of the visitors to Juliette Binoche’s magical confectionery shop in Chocolat, proving that there are indeed times when life in Kansas City is as wonderful as any romantic French film.