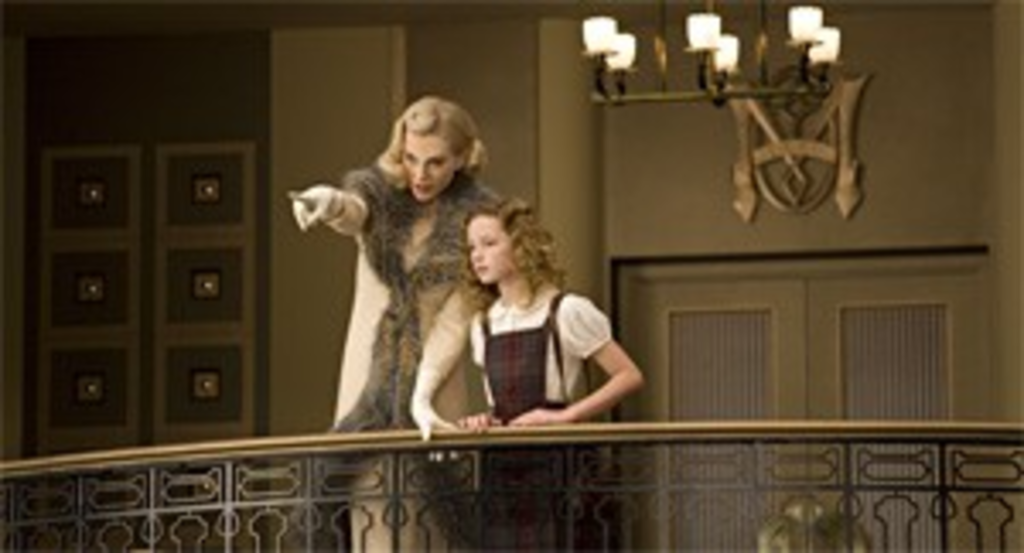 Casting Nicole Kidman as The Golden Compass‘ glacial, intractably smooth megalomaniac Mrs. Coulter is no less inspired for being obvious. Indeed, she was the first and only choice for director Chris Weitz, who adapted this first installment of Philip Pullman’s His Dark Materials trilogy. Despite the book’s description of the nefarious doyenne’s panther-black mane (the fantasy equivalent of the black cowboy hat), with her creepy, honeyed voice and suspiciously impeccable, chilly femininity, Coulter is Kidman up one side and down the slinky other.

A pity, then, that this casting-as-destiny coup is just one miss in The Golden Compass‘ comprehensive line of near-hits. Almost effective as the coolly fanatical, child-stealing villain, Kidman ultimately is one stray thread among many in a too-complicated quilt. She’s scarier in Margot at the Wedding (due in Kansas City December 14).

Complaints about the blurry, byzan­tine plotting of Pullman’s allegory may be as inevitable as comparisons of Mrs. Coulter to kid lit’s snowiest queen, Narnia’s White Witch, brought to blood-stopping life by Tilda Swinton in the 2005 adaptation of The Lion, the Witch and the Wardrobe. For better or worse, it’s a comparison that Pullman — no fan of the “tweedy medievalist” C.S. Lewis — himself begged: Calling the Narnia cycle “one of the most ugly and poisonous things I’ve ever read,” the avowed atheist set out to slyly dissemble much of that series’ embedded dogma with his story of a girl’s quest to free children from their zombielike servitude to quasi-Christian, sin-obsessed authority. It really must have burned Pullman’s biscuits to see the first Narnia movie gross nearly a billion dollars; perhaps it will be some comfort to watch his young heroine finally climb into her own wardrobe closet onscreen — to be delivered not into a land of eternal youth, benevolent lion kings, sacrifice and resurrection, but into a nightmare of surgically enforced “innocence” and power-mad zealotry.

Weitz opens the film with a necessary but weirdly incongruous voiceover introducing us to the “other world” we are about to enter, where humans walk alongside their own souls, which appear as petlike “daemons.” The daemons of children (dazzlingly realized, as are all of the film’s effects) can still change form, morphing from a polecat to an ermine to a mouse in a moment, but when children cross the brink into adulthood, their daemons become defined. We know, for instance, that Lord Asriel (Daniel Craig) is a beautiful — though ruthless — predator because he struts onscreen with a snow leopard at his side. Uncle to Lyra (the charming Dakota Blue Richards), Asriel travels to Jordan College, where his orphan niece is boarded, appealing to the shady, suspiciously clerical “Magisterium” to fund his arctic research into the source of Dust, a euphemism for “all the death, the sin, the misery, the destructiveness in the world.”

Hiding in the aforementioned closet, Lyra — incorrigibly curious and bright — witnesses an attempt to poison Asriel. She becomes determined to suss out the deal with Dust when the glamorous Mrs. Coulter sweeps onto campus and offers her an appointment as assistant in her swish London digs. Initially seduced by Mrs. Coulter’s flirting, finery and lady-adventurer vibe, Lyra soon discovers that her keeper is behind a recent rash of (possibly Dust-related) child kidnappings, including that of her friend Roger. Lyra escapes, only to be kidnapped herself and rescued by vagabonds called “Gyptians,” whom she enlists in her determined journey north to rescue her pal. Joining Lyra’s crew is a fearsome, exiled polar bear king (voiced by Ian McKellen), who later provides the film with its most spectacular sequence: some killer bear-on-bear action. Oh, yeah, and Lyra masters reading the alethiometer — a golden compass that reveals the truth — given to her before she left Jordan College.

One vaguely implicit reason Lyra has come to possess the instrument is that she could be the “prophesized child” for whom local witches have been waiting. But alongside that allusion to a decidedly virtuous, righteous child who will save us all, the film contains a head-spinning hodgepodge of ideas and tetchy references wedged into a serviceable (if harried) fantasy lark. Weitz avoids the book’s one relatively direct indictment (involving Adam, Eve, and a pile of bollocks called “Original Sin”) altogether by having the film end three crucial chapters before the book does. Those punches, unfortunately, are intrinsic to Compass‘ valorous narrative fight (i.e., trying to get kids to swallow some sense with their fantasies). By insisting on many of Pullman’s heady conceits but diluting the doctrinal antidote encoded within them, the intricate plot becomes an empty challenge. In drawing and quartering much of the novel’s intent, Weitz ends up with a film that feels not just unfinished but undone.