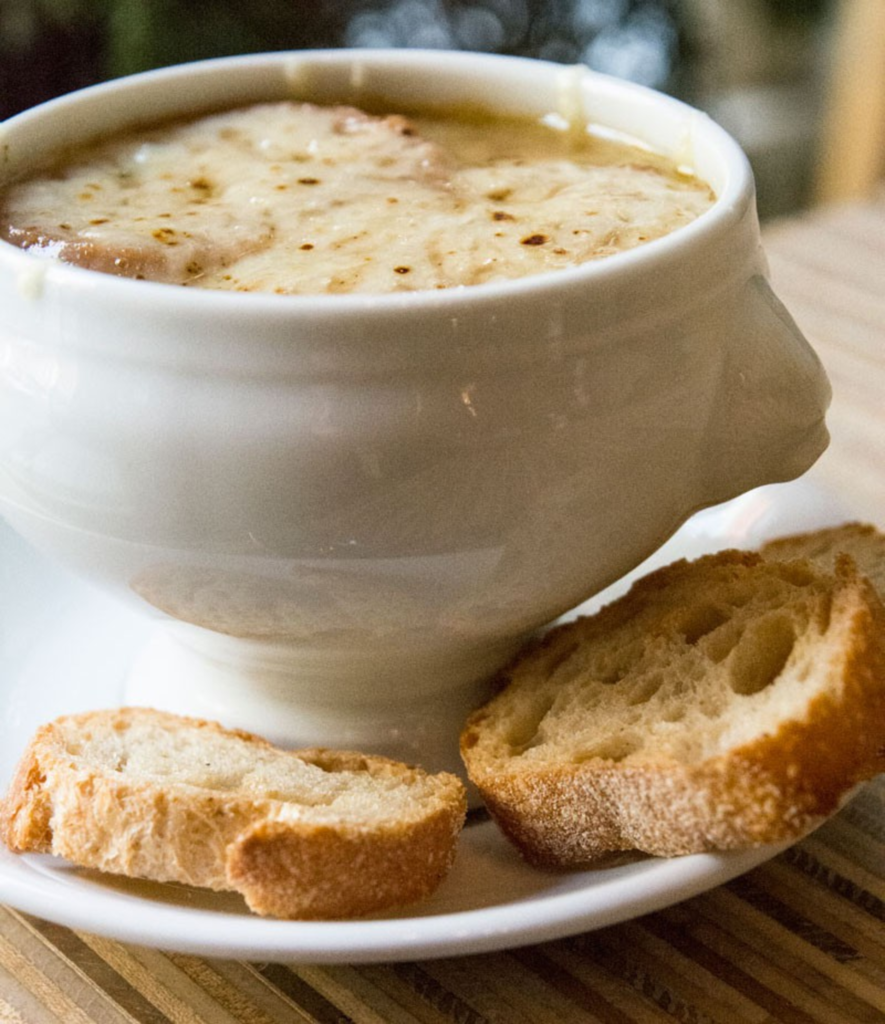 French onion soup isn’t first-date food. For starters, there’s no dignified way to eat the stuff — there’s no way to avoid your eventual need to slurp the melted cheese or deal with the soggy hunk of crouton you’ve dropped into the bowl to soak up the broth. And that’s leaving aside the dish’s main ingredient: enough onions to curdle a tin of breath mints.

Then again, enjoying a bowl of good French onion soup alone, at a corner table in a quiet café in the middle of the day, is better than just about any first date. You can make a polite mess, slurping to your heart’s content as you read a magazine or gaze out the window. And you can begin plotting your next solo bowl of this perfect winter food. Here are five I’d happily eat alone anytime.

Summit Grill & Bar
500 West 75th Street
This new Waldo restaurant (see Charles Ferruzza’s review here) is everything that chains like Applebee’s or Chili’s wish they could be. The food is delicious without being fussy, the atmosphere friendly without feeling phony. And the French onion soup here — with crostini and grated swiss and parmesan cheeses — deserves a high-five. It doesn’t skimp on the onions, and it’s thick and filling enough to make a meal.

Houlihan’s
2820 West 53rd Street, Fairway
Not that there’s anything wrong with chains. More than one person recommended that I try the French onion soup at one of this popular Leawood-based operation’s restaurants. I opted for the Fairway location, which is dimly lighted and unimposing enough that you can blend in at the bar and enjoy a bowl of soup for lunch. If you’re so inclined, you can probably strike up a conversation with another solo diner — at least, when you’re not navigating the melted-cheese situation. Topped with French bread and provolone cheese, this soup isn’t as hearty as the others on this list, but the bowl I ate was perfect with a light salad.

Aixois Bistro
251 East 55th Street
Every day until 2 p.m., Aixois is part fancy French restaurant and part laid-back coffee shop. It’s not at all awkward to drop in by yourself and post up with your laptop at a corner table (there’s even Wi-Fi) while you eat. But the French onion soup at Aixois is so hearty, you’re not going to get a lot of typing done while you devour it. Topped with a slice of baguette so fat that it fills the entire bowl, along with melted grùyere cheese, it warms you from the inside out.

Café Provence
3936 West 69th Terrace, Prairie Village
Don’t be intimidated by the white tablecloths at this quaint Prairie Village café. It’s a relaxing spot to drop in after a morning of shopping to treat yourself to a bowl of French onion soup, which here comes topped with a French-bread crouton and grùyere. For a moment, you might even forget that you’re in Kansas. When I stopped by, the older gentleman beside me at the bar spoke to the bartender in French. It doesn’t get more legit than that.

Sasha’s Baking Co.
105 West Ninth Street
This almost self-consciously adorable downtown business is that rare species of bakery with 4-foot-high silver candelabras in the dining room and the kind of tall windows usually reserved for restaurants you see in movies. Here, though, where the afternoon sun streams in, the food is real. The French onion soup is topped with good grùyere and a slice of very good house-made baguette. Other than being a little light on the onions, Sasha’s version of the dish is rich, not too salty and pretty much the best of this bunch. And you can grab one of Sasha’s colorful macarons for the road.