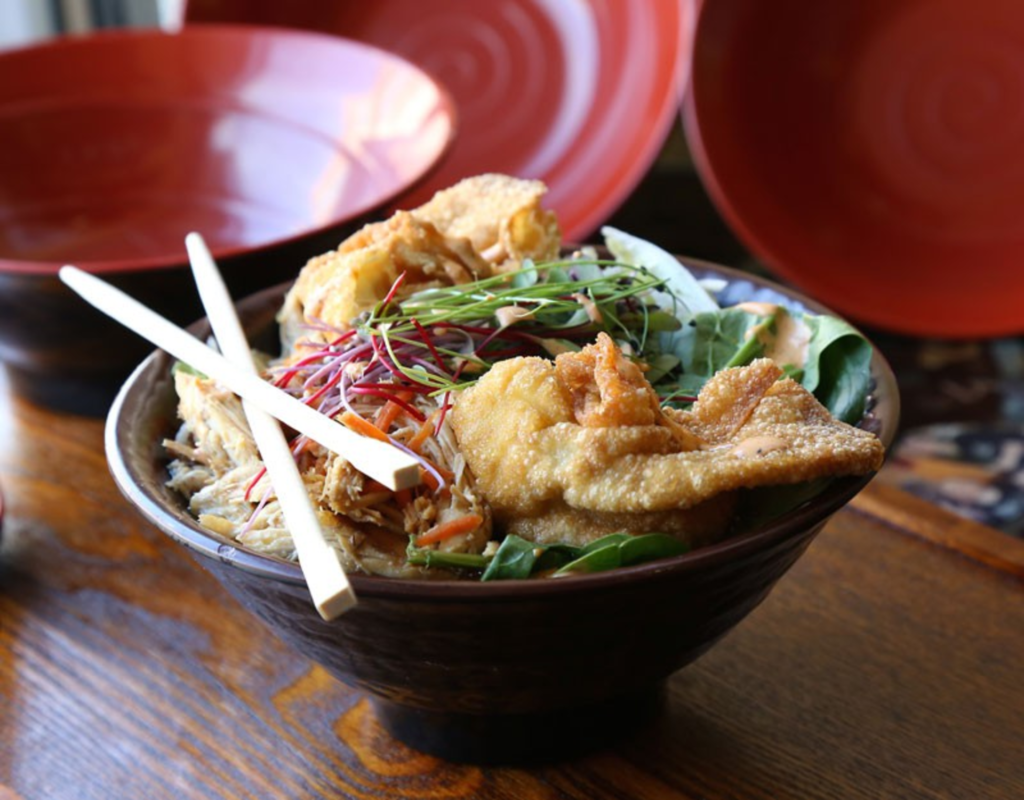 Why is it so hard to find a good bowl of ramen around here?

It’s not a complicated dish: a clear soup, often made with a richly seasoned pork stock or a fish-based broth, and hearty wheat noodles. (I’m not talking about the cheap-in-every-sense dehydrated blocks that got you through college.) Yet it appears on local menus mostly as an afterthought, if it’s there at all. There’s a fair version at Sama Zama in Westport, for instance, and Kokoro Maki House in Waldo serves a spicy, Korean-influenced take on the dish. Nara, the sushi place in the Crossroads, turns out a seafood ramen that does in a pinch.

People want the stuff. Last month, Happy Gillis chef and co-owner Josh Eans announced a Kickstarter campaign to set up a small, dinner-only ramen venue this summer, and at this writing the funding looks like a lock.

For now, though, the closest place to find good ramen at a truly ramen-centric restaurant is about 40 miles west of Kansas city.

That’s where Shantel and Tim Grace opened Ramen Bowls, almost a year and a half ago: just east of the Massachusetts Street corridor in downtown Lawrence. In fact, they’re pretty sure they’re running the first ramen-only restaurant in Kansas.

The space is familiar to restaurant watchers in this college town. It occupies the oddly configured, two-story storefront last occupied by the short-lived Queen Lizzy’s Fish & Chips, and it has been home to nine other ventures over the past decade or so. The open kitchen and the bar are on the ground floor, and the dining room is up a steep flight of stairs.

Shantel Grace first tasted ramen — real ramen, not the cellophane-wrapped salt bombs lining grocery-store shelves — when she and Tim were living in Hawaii. “They call it saimin there, and the most popular variety is served with slices of fried spam,” she says.

Ramen Bowls, in both décor and culinary attack, warmly recalls the couple’s time in the Aloha State. The menu features a Hawaiian-style saimin, spam included, among its 13 ramen bowls.

The five house-made broths include a good vegetable stock, used in the miso-seasoned veggie ramen, and a more complicated meatless creation called Green Goddess. The latter floats a jumble of thin somen noodles in a fragrant vegetable-mushroom broth; the surface is heaped with a hefty mantle of finely chopped Napa cabbage, a smattering of fresh spinach, plump avocado slices, and slivers of spicy (Kansas-made) tofu. It’s a marvelous array of textures (crunchy, soft, chewy), made better still by the supple, amber broth. When I ordered it, I expected to taste something like traditional Vietnamese pho, a noodle soup more readily available than ramen in Kansas City. But the differences outweigh the similarities.

“The biggest, most essential difference,” Shantel Grace says, “are the noodles. Ramen noodles are made from a wheat-and-egg dough that must have alkaline salts added. That creates a reaction with the broth that creates the unique yellow color to the liquid and won’t overcook the noodles, so they can soak up the flavor of the broth, which is more savory and less sweet than pho broth.”

I also liked the distinctive palette of flavors in the “Loaded Kimchi” ramen here, with its fried garlic and leeks, nori, chili oil, and a spicy but not fiery version of the fermented cabbage. What might have been a muddle of dominating notes comes out of this kitchen as a sophisticated ensemble of crisp, bright flavors.

The place has so far done well enough that the tiny kitchen has pulled back on its extra offerings for now. For example, Ramen Bowls makes just one kind of kimchi in-house; the rest is purchased from a Kansas City vendor. And it outsources the half-dollar-size gyoza dumplings. “The skins weren’t frying up as nicely on our house-made version,” Shantel Grace says.

But if you’re not here primarily for the ramen, you’re doing it wrong. I was underwhelmed by the chewy and bland fried gyoza that I sampled on the house pupu platter, for example. On the other hand, I would order the edamame again — and I never thought I’d say such a thing. The pan-sautéed, sea salt–dusted edamame here marked the first time that I’d ever liked that particular healthy (and usually boring) delicacy. The chunky vegetable egg rolls also make fine sides. Stuffed with glass noodles, pineapple, fresh spinach and cabbage, they’re among the prettiest I’ve seen.

It’s probably unwise to go wild with starters, though, given that the ramen bowls are hearty meals by themselves, often boasting thick slices of grilled roast pork (yakibuta) and various combinations of onions, cabbage, spinach, corn, carrots and fried garlic. The Graces aren’t stingy with their ingredients, and the list of add-ons is extensive but not too costly. Extra bay scallops or pork belly turns out to be a pretty good deal, in fact.

Apparently, this address’s previous tenants — Shantel Grace’s count is 10 concepts in roughly as many years — missed an obvious winning idea: ramen in a big college town. “I walked in and loved the funky quirkiness of the space,” she says. “It felt right to me. We opened with six employees, and three weeks later we had 40.”

Ramen Bowls does indeed have the feel of a curse breaker. And the flavors of excellent ramen.