I Will Dare: Looking for ghosts in Jefferson City’s empty state prison 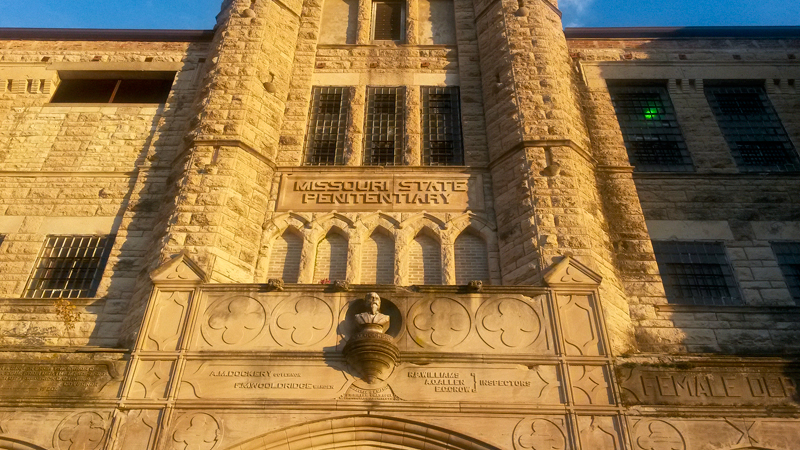 Approaching the disused Missouri State Penitentiary evokes an unwelcome sense of finality. Thick metal bars cover the windows. The crumbling outer walls are still flanked by guard towers with rusty door handles and broken windows. As I near the entrance, a full moon rises, glowing red behind shivering tree branches and thin wisps of passing clouds. I step inside.

And a smiling tour guide welcomes me (and my boyfriend).

“Check out the gift shop down the hall,” he adds, after we, like the rest of the crowd here tonight, sign our waivers. I overhear another prison tourist say, “I’m so excited to be here.” Let the cognitive dissonance commence.

The prison hasn’t always been such a hospitable environment. The imposing structure looms over the surrounding blocks of residential homes in Jefferson City, only a quick jaunt from a stunning view of the Missouri River. Built in 1838, the facility served as one of the largest state pens in the country. It held as many as 5,200 inmates at a time and was called “America’s bloodiest 47 acres.”

Now, 12 years after it closed, the place draws curiosity seekers eager to learn about regional history — or take a ghost tour of the storied grounds. The 30 people on my moonlit Sunday tour keep their iPhones poised and ready. One scared-looking woman won’t let go of her boyfriend’s hand. An excited man with a zoom lens wears his new hoodie from the gift shop, where you can also take your own mug shot or buy a T-shirt that reads: “I did time.”

Paranormal enthusiasts feel free to break out their EMF readers here or take selfies in the gas chamber, but it doesn’t take more than a couple of glimpses inside the cramped, windowless cells to silence your nervous chuckle. We are gawkers here, bearing belated witness to the harsh realities endured by thousands of inmates.

And even defunct prisons have rules.

“Don’t touch any of the doors,” one of our tour guides warns. “It took more than a thousand keys to operate this place, and we only have six — and they won’t open the room you and your buddies have locked yourself inside.”

We all giggle, but only because the thought of spending even a single night here is too horrible to imagine. The only door we’re allowed to close leads to the “blind cell,” a pitch-black isolation chamber where prisoners who stayed more than a few days would lose their sight. One female prisoner, quartered there for nearly a month, died shortly after she emerged.

I am the first to step inside. I close the heavy door and stand quietly in the dark. I can still see light from the corridor peeking through a crack by the floor. “It’s fine,” I tell myself. “It’s just an old closet, basically.” But seconds later I’m overcome by a suffocating sense of sadness.

“I hate it,” I say, rushing out into the light. “Someone else can take a turn.” But no one seems very eager to take my place.

Next, our group heads across the yard to the men’s prison, a four-story structure where up to eight prisoners at a time were crammed into one cell. Plumbing consisted of a bucket in the corner.

“This would suck,” my boyfriend says when he looks inside.

“Imagine the smell of this room on a hot day in August,” our tour guide says. We all groan.

The tour also includes a stop on death row and a visit to the dungeon. “It’s not like a dungeon, or that’s just what we call it — that’s really what it is,” our tour guide insists. The windowless, underground chambers do indeed seem true to medieval description.

“This would really suck,” my boyfriend says, running his hands over the impenetrable stone walls.

The evening’s final stop is the gas chamber, a small, round room with a narrow chimney sticking out the top like a straw. On my way out, I pause to look at the framed photos of the 39 men and one woman who were executed here. Taken right before they were brought to the chamber, the photos are captivating. One 22-year-old man looks terrified, his eyes shimmering with tears. According to our guide, some of these men proclaimed their innocence with their dying breath.

I’m most intrigued by Bonnie Heady, who, with boyfriend Carl Hall, was convicted of kidnapping and murdering a 6-year-old boy. One group of paranormal investigators reportedly caught Heady on tape saying the word love. This is what she told investigators after she was caught in 1953: “I did it for love.”

Looking at Heady’s expressionless eyes in that tiny black-and-white photo provides the spookiest moment of the night, chilling me in a way I can’t easily dismiss. When my boyfriend and I get in the car and start the long drive back to Kansas City, it takes a few miles before I feel like laughing again.