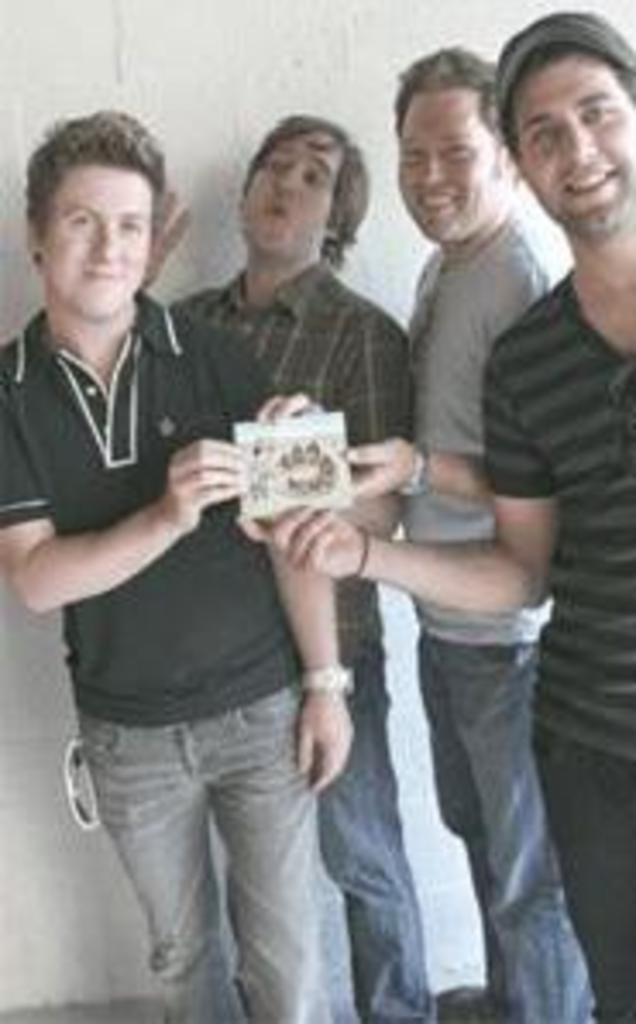 In the fall of 1879, in the small seaside community of Blackpool, England, a handful of residents gathered on the city’s shoreline to power up eight arc lamps, casting an electrified glow on the dark waters below.

Today, almost 130 years later, the Blackpool Lights — or Blackpool Illuminations, as they’re known in the city — are the centerpiece of a 66-day festival that brings in more than 3.5 million tourists and about $500 million in revenue each year. What started as a sparkle from a handful of lamps now stretches across six miles of Britain’s northwestern coast.

It seems unlikely that Jim Suptic, lead singer for Kansas City’s own Blackpool Lights, was trying to be prophetic when he coined his band’s name. In any case, it looks like it’s going to be a good fit.

Suptic, the former guitarist and sometime singer for the Get Up Kids, formed Blackpool Lights in mid-2005 (after the Kids’ demise) with bassist Brian Everard, drummer Billy Brimblecom and guitarist J.D. Warnock, who was later replaced by Buffalo Saints strummer and singer Thom Hoskins.

Whereas his days with the Get Up Kids were a bit more lavish — a world tour, legions of fans and a longstanding partnership with indie stalwart Vagrant Records — Suptic has chosen to venture out on his own this time. He has left behind the arena shows, much of his celebrity and, perhaps most important from a business perspective, promotional and distribution support from a high-profile label. For him, starting over truly was starting from scratch.

“If we wanted to be on Vagrant, we could’ve been on Vagrant,” Suptic says, explaining his newest endeavor from a table at the Roasterie Café in Brookside. “But they’re nothing but proud of what we’ve been accomplishing here on our own.”

It’s important to note that this is the exact moment in Suptic’s biography when everything splits down the middle. There is, of course, Musician Jim, who recently wrapped up production on the band’s debut full-length, This Town’s Disaster, which hits stores June 20.

But it’s the other half of his personality — let’s call him Businessman Jim — who has made his way to the coffee shop on a Monday afternoon. What he’s discussing isn’t music — it’s the concept behind his new business, Curb Appeal Records.

“Everyone who’s involved with this is really enthusiastic and really committed to what we’re trying to accomplish,” he says after grasping for a phrase that will help explain the difference between Curb Appeal and every other startup in town. “We’re creating loyalty in a business that isn’t loyal.”

That commitment is no accident — like any good businessman, Suptic has surrounded himself with people he knows he can trust.

Seated at the table with him are the label’s three other co-founders: Al Duffy, a local entrepreneur whose family ran a beer distributorship until 2003; Alex Brahl, an Overland Park native and Lawrence music-scene staple who spent his early twenties working management for Vagrant and the Get Up Kids; and Enrique Chi, a fan turned publicist who has worked with well-known local acts Vedera and Reggie and the Full Effect and hometown label Second Nature Recordings.

Throw in a handful of unpaid interns, and you’ve got yourself a record label.

But it’s not just this brain trust that makes Curb Appeal stand out; as Suptic and the rest of the group describe it, it’s an innovative approach to the outdated business model of the music industry. With only one band on the label — and with all of the managerial and promotional work done in-house — Blackpool Lights can function as its own well-oiled machine.

“Basically, we’ve got the management company tied to the label, as opposed to most labels, where it seems like all the different groups are fighting against each other,” Chi adds.

If this concept sounds familiar, that’s because it’s been tried before. In 2005, Fall Out Boy bassist Pete Wentz formed Decaydence Records, an imprint of Fueled By Ramen Records, so he could have greater control over his band’s management. Omaha’s well-known Saddle Creek Records also operates under the same principles, with most of its promotions and management located under one roof.

In fact, Chi says he and his labelmates traveled to Omaha to figure out how Saddle Creek became so successful.

“Basically, the label functions as a publicity company for the band,” Chi says. “There are a lot of other ways to make money without selling records. If anything, the record’s a promotional tool.”

Suptic is the first to admit that not all of the cards have fallen into place yet. The label’s Web site is practically nonexistent, and the office — a three-bedroom house in Brookside with a wet bar and a makeshift practice space in the basement, is still in shambles. And, Suptic says, Chi is the only em- ployee drawing a paycheck so far.

But for a label that nobody had even heard of six months ago, there’s been tremendous progress. In addition to a brief opening spot for Anberlin, Blackpool Lights will headline its own nationwide tour in July and August.

On the retail side, Chi has scored a deal with Best Buy to have the band’s album featured in its Sunday circular, which will introduce Blackpool Lights to about 5 million homes. Brahl adds that the initial pressing of the record will be 25,000 — an astonishing number for a brand-new band on a brand-new label.

“I just wanted to create a label that was going to work as hard as the band’s working,” he says. “This label started because of Blackpool Lights, because of this record, but that’s just the beginning.”

They might not be visible yet from a distance, but the Blackpool Lights are starting to sparkle.