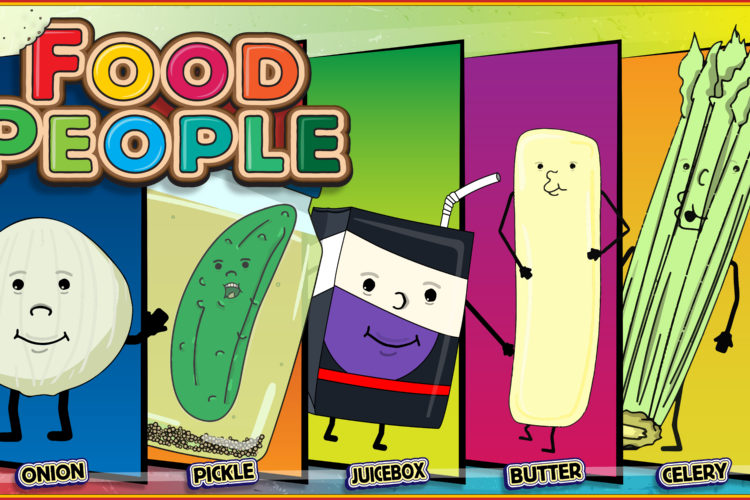 Food. The mere mention of food drives people into a frenzy. Everyone has an opinion about favorite meals, best cooks, homemade recipes, great restaurants, to name a few food-related things. There’s even an entire cable network channel dedicated to food, 24 hours a day, seven days a week.

People love food and it’s the vision of Brodie Rush and Cori Weber to bring food to life. The duo is currently working together on Food People, a cooking show disguised as an all-ages, fully animated, story-based sitcom where every episode ends with fans cooking the episode’s recipe.

Rush and Weber met each other in 2018. It was the topic that took over their first date. While it’s been in Rush’s head for years prior to meeting Weber, the two found each other at the right time.

Quarantine kept them in the house with their children anyway, so there was no better time than now to get things cooking.

“It’s something that without Cori’s help and being a partner in all of this (that) it wouldn’t be happening. It wouldn’t be what it is,” Rush says. “I would’ve probably dropped off a while ago and it’d turn into one of my monster 10-year projects.”

The dream was on hold after Rush suffered an aortic dissection in his living room on Oct. 11, 2019, and was about an hour from his aorta rupturing and bleeding out. Two emergency open-heart surgeries, months of recovery, and one pandemic later and he’s back like Michael Jordan wearing No. 45

Rush has animated and drawn everything that will be seen in the first episode. The backdrops in different scenes and the characters all come from his talented hands, while Weber is responsible for the few humans that show up in the intro and outro. They’re also grateful for the four interns that have chipped in along the way.

His inspiration for animating came from watching Tim and Eric Awesome Show, Great Job! Heidecker and Wareheim put things together in a way that made it feel like he could do that. He mentioned that it wasn’t a shot at the comedians, but more so the fact that it was “fun as hell” to put together.

The first episode of Food People is about grilled cheese. Some of the characters you’ll see represent the ingredients needed to make the American classic, like sticks of butter, bread, and chunks of cheese. They’re taking viewers on a journey through the kitchen to become a tasty sandwich.

They have people involved from all over Kansas City, with at least 26 locals represented in the pilot. They’ve got voice actors from Los Angeles, Chicago, and New York. It also features Jerry Torre, whose life was the subject in the 2011 film The Marble Faun of Grey Gardens.

“I thought we’d have to do it ourselves because we don’t have a budget. We can’t pay anybody unless we do get funded and we went for it assuming we’d have to do all the voices,” Weber says. “We wanted to tell a story of diversity and acceptance and making that normal. We couldn’t just do that by ourselves.”

The friends they contacted became involved with no hesitation. Most of who’s involved are musicians who can’t do anything right now because of the pandemic, so this gives them something to break out of their slump. The initial call on social media drew over 50 auditions, with at least 30 roles cast for the first season.

What started out as a big question mark has the answer. Every day, something new happens that causes it to evolve beyond their expectations. Weber says it’s been magical to watch it grow and to see the reception it’s getting.

Their goal is to “relate to every child and adult, no matter who they are or where they live in this world and remind them how food shapes our lives and brings us together as humans.  The past, present, and future of all foods are equally important, the same is also true for all people.”

The first episode is currently being built and it’s the reward for anyone who donates to the Kickstarter. It’ll be available in November and the Kickstarter is what they’ll use to pay everyone involved with the project. As they reach more goals, more episodes will come out.