Pop-up politics: Local vendors fight to claim their space in the metro 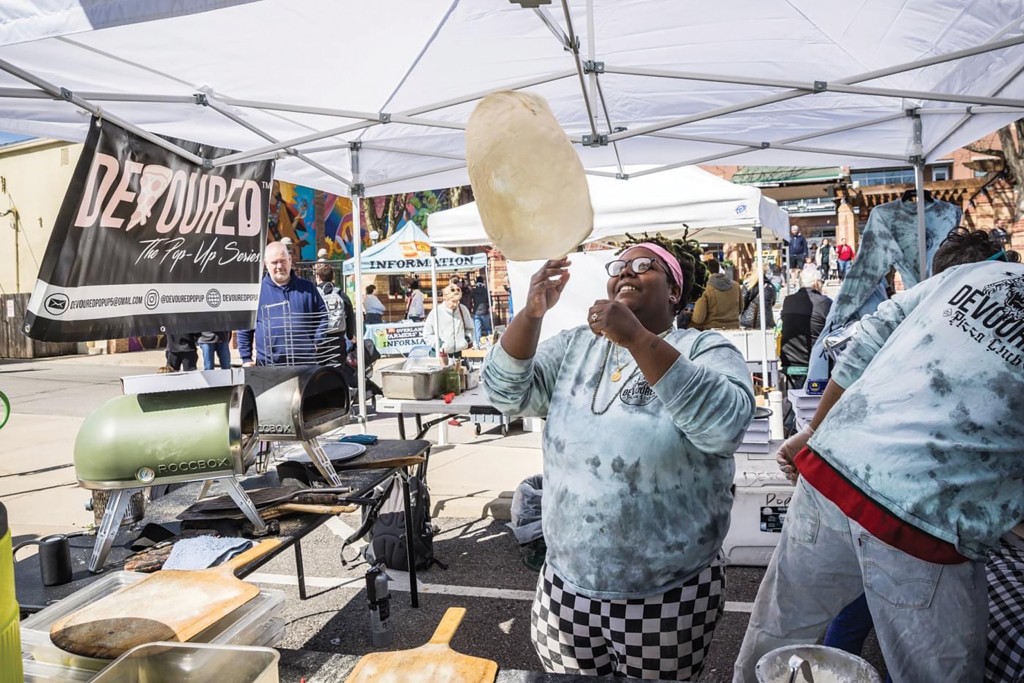 Scroll through Instagram for a few minutes, and there’s a good chance you’ll see an ad for a pop-up food business—some kind of nomadic restaurant, bakery, or shop operating with variable hours outside (and sometimes inside) other businesses.

Although the business model has been around for decades, pop-ups surged during the pandemic, with plenty of news coverage and magazine articles clocking the rise.

If the last couple of years proved anything, it’s that the pop-up business model offers a host of benefits besides pandemic-friendly ventilation. Pop-ups are cheaper to launch and cheaper to operate, requiring less upfront investment in real estate, equipment, and staff. Many pop-up vendors also save on traditional advertising, relying on Instagram to spread the word about their businesses and hours.

But it can be hard to quantify the number of pop-up businesses in KCMO for one reason: most of them are operating illegally.

The city’s permitting infrastructure neither predicted nor adapted to the rise of the pop-up, leaving entrepreneurs scrambling for solutions. Sav Brady, owner of The C Word Cakery, is one of many pop-up vendors fighting for a better regulatory regime. During the pandemic, she launched The C Word out of her home, selling vegan cupcakes and layer cakes decorated with fresh flowers, intricate piping, and off-color messages like, “Happy fuckin’ birthday,” or, “Hope your baby doesn’t turn out to be a murderer.”

Baking for The C Word was her dream job. Thanks to pop-ups, she was able to make it her full-time job, too.

“I started popping up around the city, which helped me make a lot of really cool friendships and start new relationships with businesses and other vendors, and that got my client base going,” Brady says. “I don’t think I would be where I’m at now if it wouldn’t have been for pop-ups, and I think that’s how it is for a lot of businesses.”

After hearing about another pop-up vendor being shut down for operating without a permit, Brady called the KCMO Health Department to ask how she could operate legally. “It was really hard to get a straight answer. I don’t even know if it’s necessarily the health department’s fault, there’s just a lot of gray area.”

Currently, pop-up restaurants and food vendors don’t qualify for a KCMO “food establishment” permit, which is the annual permit that allows most brick-and-mortar restaurants and bakeries to operate. Nor do they qualify for a “mobile food unit” permit—unless they already own a food truck or trailer with mechanical refrigeration and a hand-washing station.

And most vendors don’t operate that way. Many choose the pop-up model for its low barrier to entry as they may not have sufficient capital to invest in a food truck and equipment right away. So, they set up a table or tent outside a bookstore or brewery to test the waters and make sure there’s a market for their product.

For these vendors, the only legal path to operation is to apply for a temporary event permit—a one-day pass that allows them to sell at a public event after a Health Department inspection. But if the “public event” isn’t sufficiently event-y, the permit still might be denied. In the city’s eyes, an event is a wedding. A bat mitzvah. A food festival. An event is not “selling cakes.”

Brady has stopped running pop-ups entirely while she awaits a safe and legal solution, and her business has taken a hit. She estimates thousands of dollars lost from shutting that part of her business down. In late April, she started an online petition encouraging the city of Kansas City, Missouri to create a permit for pop-ups. At the time of this writing, about 650 people had signed.

Jhy Coulter, the owner of the pop-up pizza shop Devoured, has faced similar challenges. When she first launched her pop-up a year ago, she tried to do everything above board—she, like Brady, called the KCMO Health Department and even visited the office in person.

“They [the Health Department] didn’t really understand what pop-up events were or what I was trying to do,” Coulter says. “I got a lot of no’s. I got a lot of confusion. A lot of times, they’d say, ‘Oh, we just don’t have the staffing to approve your event.’”

Coulter came away with the impression that the explosion in pop-ups during the pandemic—and the associated explosion in people like her applying for temporary event permits—had stretched the city’s inspectors thin.

Last summer, Coulter tried to stage a pop-up at the Crossroads cocktail bar SoT on two consecutive weekends; she applied for a permit both times. Her first application was approved. Her second, identical application was denied.

When she asked for an explanation, she was told an inspector wasn’t available that day. (Although no Health Department officials were available for an interview with The Pitch, Deputy Director Naser Jouhari told Coulter at a public meeting that no permits should have been denied due to staffing shortages).

Coulter decided to hold her pop-up at SoT anyway; she says the Health Department reprimanded both her and SoT for proceeding without a permit. The experience was frustrating enough that she eventually decided to move Devoured across state lines to Johnson County, where she says she can pay an annual fee for a permit that allows her to operate in a variety of areas.

This summer, she plans to sell her pizza every Wednesday and Saturday at the Overland Park Farmers’ Market. She’s joining a community that’s developed a reputation as a small business incubator. Taco Naco started there as a pop-up before opening a brick-and-mortar restaurant; so did Buck Tui BBQ. Both are now successful permanent businesses—and both stayed in Overland Park.

If the permitting process in KCMO remains convoluted, the city risks losing more small businesses to Kansas (or worse, stifling them before they get off the ground). Still, Coulter is cautious about playing into “border war” tropes. She’d like to serve her pizza around the metro without worrying about the ZIP code.

“I just want to make pizza for people. I’m not trying to start a war between Kansas and Missouri. I want the Health Department to know that. We’re not trying to fight with you guys. We’d just love to serve people and do cool shit around the city.”

In the absence of guidance from the city, pop-up business owners have taken a few different paths. Some of them, like Coulter, have moved across state lines. Some, like Brady, have stopped their pop-up events entirely. And others have chosen to keep operating illegally, knowing they could face consequences, including fines.

“I don’t know of any permit I can get to make what I’m doing today completely legal,” says Dan Duncan, owner of the bagel pop-up Bread Friends.

Duncan had been baking for years before he hosted his first pop-up. He went through a sourdough phase long before it became a pandemic punchline. But he stumbled on a hit when he started making Montreal-style bagels—smaller than New York-style bagels and baked over a wood fire. 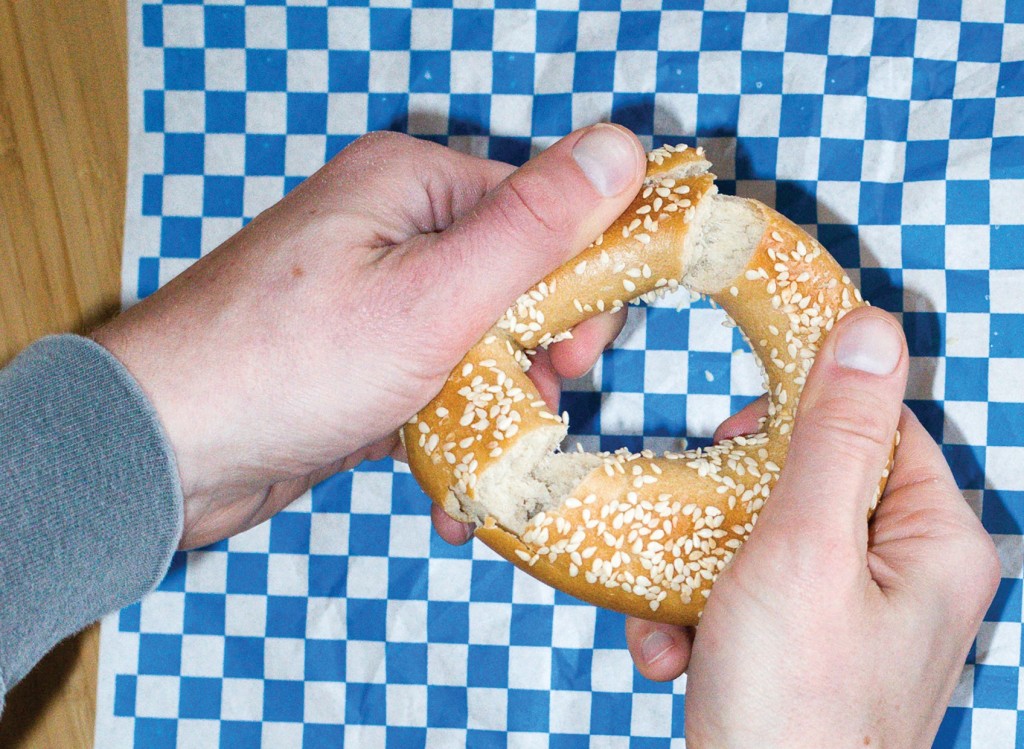 No matter where he goes, he always sells out. But he knows he’s on thin regulatory ice. Missouri cottage food laws allow him to sell bagels, but not the sweet chili or wasabi honey cream cheese he serves alongside—and who wants a bagel without schmear?

Duncan says he takes food safety seriously and does the best he can on his own. He has his food handler’s permit, sanitizes his equipment, and monitors his coolers closely to make sure his schmears stays at a safe temperature. He hasn’t had any run-ins with the Health Department yet. But the risk has kept him from scaling his business up even as his client base grows.

“I just want to be able to operate safely and legally and not have to worry about whether the Health Department is going to shut me down.”

It doesn’t seem like an impossible ask. Duncan points to Chicago’s Pop-Up Initiative, which created semi-permanent licenses for both pop-up operators and the businesses that host them.

“I think there’s a really strong case to be made to the city that offering this sort of path to legitimacy is ultimately a boon for the local economy. It gives us a chance to test our product, make sure there’s a customer out there. And once we get to the point where if we want a food truck and want a location, then we’re more likely to succeed and more likely to be a net benefit for the local economy and the community.”

Brick-and-mortar businesses that host pop-up vendors are already seeing some of these benefits. Richard Garcia, owner of Big Mood Natural Wines, collaborates with pop-up vendors almost weekly. He’s worked with Duncan, Coulter, and Brady as well as the vendors behind Stag Pizza, Tacos Valentina, and No Coast Creamery.

“The initial reason for even hosting pop-ups was to share my space and platform and help other small business owners come in and get their thing off the ground a bit,” Garcia says.

But the pop-ups have been good for Garcia’s business, too. Big Mood isn’t just a bottle shop, it’s also a bar where customers can purchase wines by the glass.

“It’s nice to have food available for people to come in and grab something to eat while they drink here.”

In recent months, Garcia has expanded his focus from hosting pop-ups to hosting organizational meetings about them. Brady, Coulter, and members of the pop-up Tacos Valentina have used Big Mood as their de facto headquarters as they discuss challenges, contact city officials, and research potential solutions.

In early May, the group met at Big Mood to discuss some of their challenges and ideas with Jouhari. The meeting was requested (though not attended) by city manager Brian Platt.

During the meeting, Jouhari seemed committed to helping pop-up vendors find a solution. But he didn’t hide his concerns.

“You cannot operate whenever you want, wherever you want on a sidewalk,” he tells them. Operating restrictions are there for a reason. The CDC estimates that 3,000 people die from foodborne illness every year—a statistic Jouhari can (and does) recite by heart.

“What’s the difference between us and a hot dog cart on the sidewalk?” Coulter asks.

Get a cart. The pop-uppers are unmoved. Nor do they seem convinced when Jouhari urges them to pursue “ghost kitchens” instead.

Many vendors can’t afford to rent a commercial kitchen to prepare their food any more than they can afford a food truck or cart; others, like Coulter, need to able to assemble and cook their food on location (and in a specialized pizza oven).

The meeting ends after an hour and a half with little in the way of solutions but a commitment to continue the conversation. The vendors agree to work on a rough draft of a new permit for Jouhari to consider and target a follow-up meeting at the Health Department after June 1, 2022.

If they create a new permit, at minimum, the City Council will need to debate and vote on it, which means vendors may not see a resolution before the summer. But they’re hopeful. At the very least, they’re willing to try.

Before Jouhari leaves, he hands the pop-up vendors a stack of printouts of the city’s current permits for them to draw from.

“I want you to serve the city, generate more revenue, be a successful business,” he says.

On that much, everyone agrees.