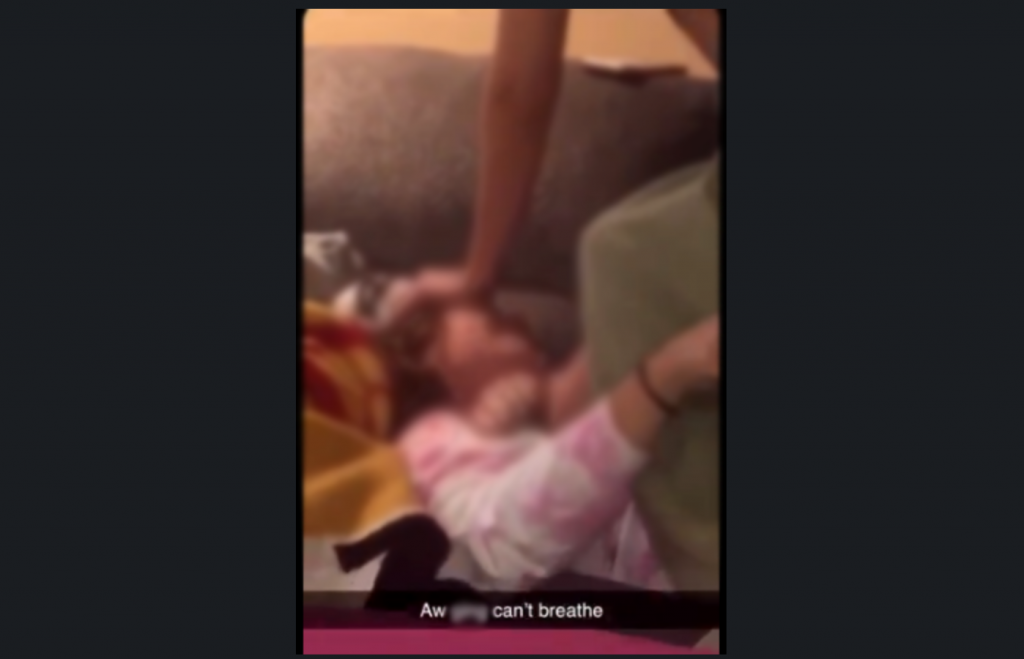 A heavily blurred screengrab of the video. // Photo from Twitter

Three Lee’s Summit teenagers are in hot water after a Snapchat video of them recreating George Floyd’s death and participating in underage drinking surfaced online this week.

In the video, one girl is kneeling over another, who yells that she cannot breathe and the two of them laugh. The girl being pinned down appears to have an alcoholic beverage in her hand and the video is captioned, “Aw [name] can’t breathe.” Someone off-camera is heard saying, “you can do it.” as they all giggle.

The two girls pictured in the video are graduating high school seniors and one is set to attend the University of Missouri and the other is set to attend Northwest Missouri State in the fall. Both universities have been made aware of the video as it circulates social media and both have indicated that they are looking into it.

While we are aware of the identities of all three parties involved, we are declining to print their names. We have reached out to for comment on the situation and will update the piece if we hear back. Having an explanation for what happened here and how this “joke” came to be would shed some light on why it exists in the first place.

Thank you for letting us know. We are aware of the video and have submitted the details to the appropriate offices.

Many schools, including the University of Missouri and Northwest Missouri State, have codes of ethics and anti-racism policies and expectations of their communities that this behavior explicitly violates.

In a statement released Thursday by the presidents of the University of Missouri system, prior to their knowledge of the video, they stated “We have no tolerance for discrimination or acts of hate in our community and encourage robust, respectful dialogue. No matter where you come from, no matter your race, gender, identity, preference, or perspective, we all come together to learn, and everyone deserves to be treated with respect and to thrive.”

As the video surfaced, many took to Twitter, contacting both universities and suggesting that their admissions be revoked. In the original tweet, @McaffeJerica says, “this video was posted by a graduating senior in my class of two other girls in my class. disgusting! @NWMOSTATE @Mizzou are getting some great students next semester!” Another user, @maritziio called out both schools and said, “@NWMOSTATE @Mizzou please revoke their acceptance, this is absolutely fucking disgusting.”

We are covering this disastrous situation, not to further encourage a pile-in for this behavior and these girls, but rather to expose that beliefs of this nature are systemic and need to be corrected.

There is never a time when racism is okay, but there is certainly not a worse time than when the entire world is coming together to fight the injustice that ended George Floyd’s life this week. More than anything, this has exposed that our community still has a lot of work to do in raising members of society that respects others regardless of their race. Racism is alive and well in Kansas City. It’s time to do better.

We can only hope that the people involved can learn from the multitude of voices being raised to let them know this is unacceptable.

Both universities have been contacted by The Pitch for a comment. While neither has replied directly to us, Northwest Missouri State University has released this: 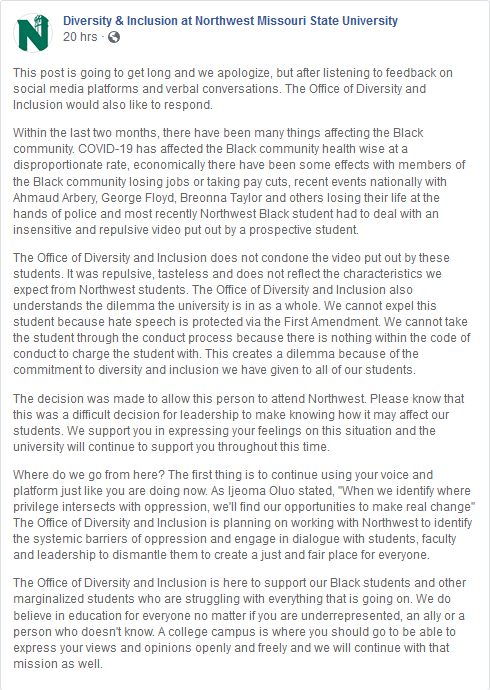 If you would like to find ways to actively combat racism in our own community as well as the Minneapolis community, check out these resources our team has put together.