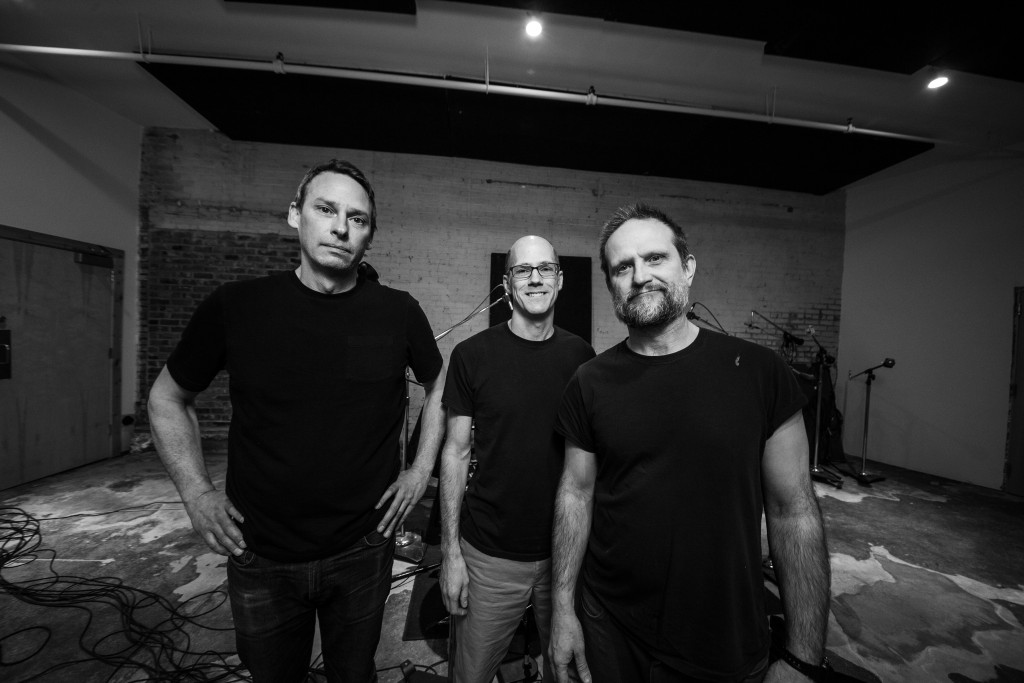 The original plan, says Scott Hobart, was to re-record Giants Chair’s second record. This was Duane Trower’s idea. Trower, a longtime local sound engineer, had recorded Purity and Control the first time around, back in 1996. But it was the first album he’d ever done. He’d learned some things in the 20 years since. He thought he could do it better.

So Trower got in touch with his old pals in the post-hardcore trio—Hobart the frontman, Byron Collum on bass, Paul Ackerman behind the kit—and told them if they wanted to relearn those old songs, he’d be keen to take another crack at it.

“I was game,” Hobart says, seated in front of Parisi Cafe at Union Station on a break from his job designing sets at the Coterie Theatre. “I thought it might be fun.” Then Ackerman suggested maybe Giants Chair should just write some new material. So in 2016, the band started working on some new songs for the first time in two decades.

Giants Chair’s ‘90s heyday was a brief but fruitful one, featuring two full-length records on Nebraska’s Caulfield Records, a fistful of seven-inch singles and splits, and tours with fellow Kansas Citians Boys Life. Along with that band, Giants Chair was also contemporaries of local acts like Molly McGuire, Shiner, and Season to Risk—the so-called “Kansas City sound” that for a fleeting moment in time looked like it might be one of the many next big things after Seattle. Though Giants Chair never made it up the majors, the band has retained something of a cult following, up to and including the members of Cave In, who covered “The Callus” on their Tides of Tomorrow EP.

Giants Chair disbanded in 1997, after the tour for Purity and Control. “New stuff wasn’t really coming, and we didn’t want to force it into something less than vital to us,” Hobart recently wrote in a piece for the Talkhouse.

Ackerman moved to Washington D.C., where he joined former Boys Life members Brandon Butler and John Rejba to play in the Farewell Bend for a couple years. Collum remained in Kansas City and played in the indie-rock act Doris Henson from 2002-2007. Hobart also stayed in Kansas City, starting up the beloved honky-tonk act Rex Hobart and the Misery Boys—although he moved to Buffalo in 2005, while his wife went to grad school. By the time Hobart returned from Buffalo, three years later, Ackerman had also returned. Over the last decade, Giants Chair has played the occasional show, once every year or two, often some special occasion or benefit. But largely the band has been dormant.

Now, though, we have Prefabylon, a new Giants Chair album, which arrived in December, a full 30 years after Hobart, Collum, and Ackerman met one another as students at the Kansas City Art Institute in the fall of 1989. It’ll be familiar to fans of the group: post-punk emo tones, a touch of Midwestern twang.

“The music came pretty easy,” Hobart says. How about the words?

“The lyrics were a little bit more of a challenge,” he says. Hobart has been busy writing country songs for the last 20 years—a different animal. “That kind of stuff [country music] was just, gush in a journal forever, and then you kind of piece it together. Or, you practice enough, sometimes things were even more organic, in that you would be playing through the song for the tenth time, and just some words would come out.”

Whereas with Giants Chair, he was aiming for songs with more of an anchor to them. And if there were any doubts as to whether or not Hobart still has something to say, the refrain in the song “Russian Racehorse,” leaves little doubt about it. Confusion is power! Hobart shouts repeatedly over instrumentation working hard and fast enough to give Helmet’s “Unsung” a run for its money.

“They’re not really narrative, but I think they have a little more cohesion in and of themselves, lyrically,” Hobart says of the ten songs on Prefabylon. “At first, I thought it was going to go down the easy path of obtuse, abstract lyrics. But I wasn’t feeling really passionate about that. I wanted to have something to say. I looked inside and said, ‘These are the things that are frustrating to me right now, and these are the things that music seems to vibe with.’ So, yeah: Some of it is due to frustration with politics, culture, [and] life in general as a 48 year-old.”

“But I was also just trying to rely back on the 30 year-old Scott who was just throwing stuff out there and seeing what sticks sometimes,” Hobart continues. “I feel that I, as a 48 year-old father of two, married for however long, have earned the right to be frustrated and express it.”