For the past year and a half Danny Bowersox and Tyler Bachert have been filming the choir’s evolution, hoping to share their talent with a larger audience. 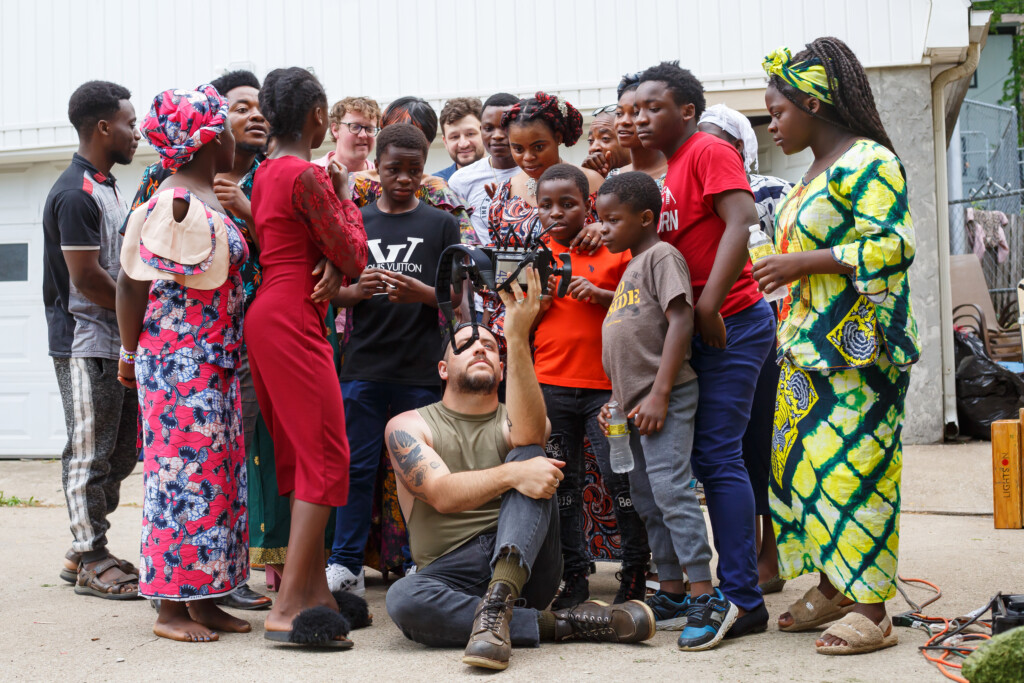 Bowersox (center) reviews a shot with members of the Salvation Choir. // Photo by Diana Gonzalez

For the past year and a half, Kansas City filmmakers Danny Bowersox and Tyler Bachert have been creating a documentary about The Salvation Choir—a band partially made of family members and friends that fled armed conflict in Congo.

Founded in 2019, the Congolese Rumba band is led by choir masters Jeune Premier Silambien and his father, Pastor John Wilondja. The rest of the group is made of aunts, uncles, sisters, brothers, cousins, and neighbors.

Bowersox and Bachert are both educated audio engineers, and have experience recording, performing with, and mixing bands. They moved to filmmaking through production sound mixing and created their boutique audio post house, Plus Minus, in 2019.

In May 2021 Phil Dickey—a friend of the choir that helps them book gigs in Kansas City—reached out to Bowersox. Dickey sent recordings of the band, and within a month Bowersox and Bachert were heading to meet the choir.

“It was way more, or felt like way more than just recordings,” Bowersox says. 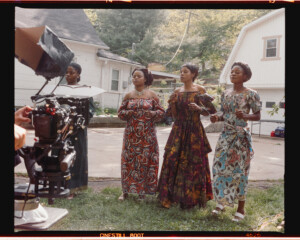 The documentary crew films the Salvation Choir while they perform. // Photo by Markel Randle

Bowersox recounts that during his first meeting with the choir he brought a camera, but didn’t expect to use it. However, after talking with the band, their natural ability to perform almost forced him to hit the record button.

“I felt so comfortable and they were so welcoming,” Bowersox says. “It was like they’ve had people there filming before.”

The duo decided that they had to take the leap to produce their first documentary, and, for them, the most important step was to establish trust with the band.

“I want whoever I’m working with to know that I care about them beyond what I’m filming,” Bowersox says. “I want them also to see how special they are.”

The Salvation Choir’s home stage is at the Messiah Lutheran Church in Independence, Missouri. In 2022 the crew filmed them learning how to travel as a 20-person band, book bigger performances, and expand their sound.

“It’s amazing to have them around,” Bora Wilondja says. “When they’re there, we just feel the vibe, you know?”

Bora, a member of the choir and daughter of choir master John Wilondja, is excited to see how the documentary will help the choir grow and reach a new audience. “More people are going to know us and also get to love us and support us,” Bora says. “I like to focus on vibes, not be concerned about the haters, you know?”

Her brother and fellow choir member, Pelo King Wilondja, hopes the documentary will push the choir to improve as well. “Right now, we have seen a range within ourselves between seven or six,” Pelo King says. “I just want to go up to nine or more.”

Music is a universal language

Their connection has helped both the documentary crew and band overcome hurdles while filming. The hardest part, so far, has been the language barrier.

Many members of the choir came to the United States after fleeing armed conflict in Congo. The choir writes, records, and performs original gospel songs entirely in Swahili. However, Bowersox says the music resonates with people whether they understand the lyrics or not.

“It’s a vibe. It’s a space to be put in, and I think that’s why it resonates so much with people. There’s an energy and an earnestness that sometimes it’s hard to see with bands,” Bowersox says. “They make songs that you want to live inside for as long as you can.” 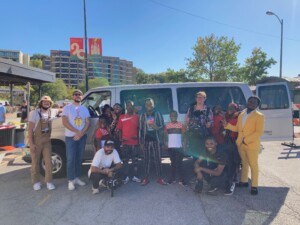 Bowersox and Bachert filmed the choir while they were traveling for performances. // Photo by Phil Dickey

In the year and a half that Bowersox and Bachert have been filming the Salvation Choir, they have started finding larger performance opportunities at venues and festivals in the Kansas City Area. For example, last year they performed the Crossroads Music Fest, the Nelson Atkins Museum’s Lawn Party, and the Boulevardia Festival.

The band is expecting to have more large performances in 2023, and they are looking to make a record. As the band’s year “heats up,” Bowersox and Bachert are thankful that they don’t have pressure to release the documentary.

“We’re not on any deadlines. We can kind of allow things to unfold, which I think is ultimately more interesting than if we had completed something a year and a half ago,” Bowersox says. “That rapport that I’m building with them is really important to me, and I think that it will ultimately, hopefully be really important to the film.”

However, the excitement for the documentary is contagious, and the choir has growing hopes that it will open doors for them once released.

“One day it will do something good for us, you know? Do something big,” John says, translated from Swahili by his son Pelo King Wilondja.