Liz and Gooch take to the skies, sounds ensue

Ahead of this weekend's Kansas City Air Show, we embedded Liz Cook in a WWII fighter plane. This is her tale. 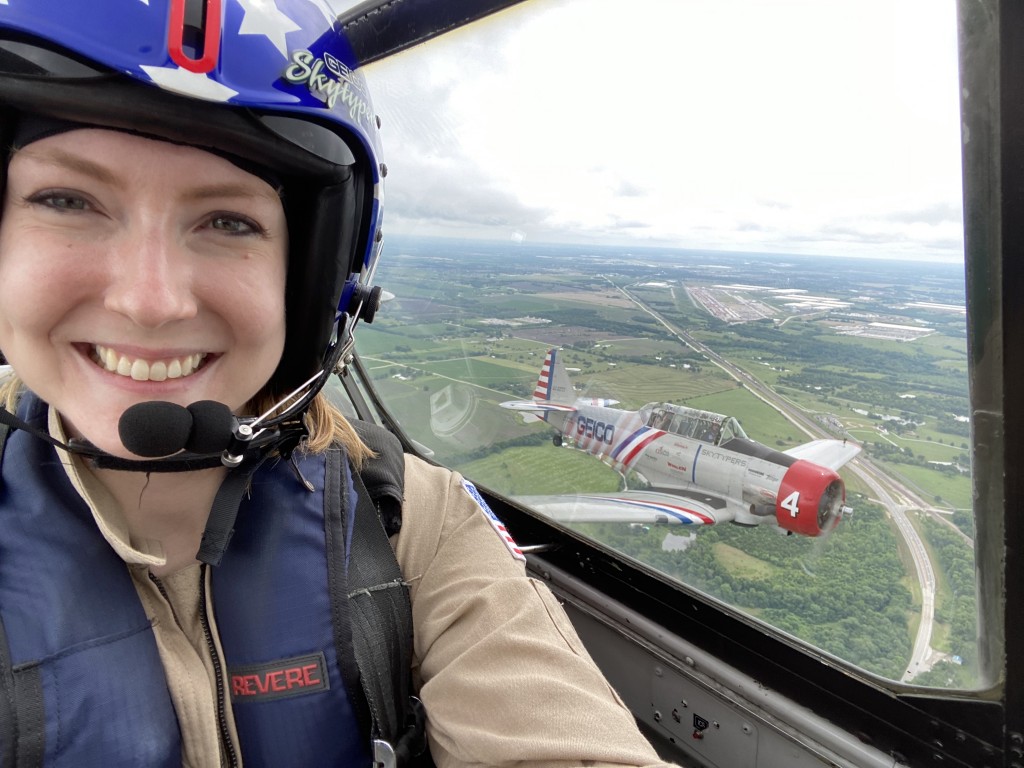 There’s a whole genre of journalism that’s basically just a foreign exchange program for reporters. Every local news station in the country has a recurring “So-and-So, Do My Job!” segment that exists so that women in sheath dresses can drive forklifts. The news value is dubious, but at least someone’s having fun.

I’m snide about this genre only because no one’s ever invited me to drive a forklift. This week, I got a better offer. The GEICO Skytypers Air Show Team, a precision flying team that also dot-matrix prints messages in smoke, were in town for the Kansas City Air Show this weekend. Would I like to ride in one of their World War II-era warbirds and write about it? I would.

I arrive at the New Century Air Center in Gardner, KS, and the Skytypers are lined up on the tarmac like trophies in a display case. I haul myself into a single-engine T-6 variant known as the SNJ. It’s dove gray with a cute red clown nose and a Big Ass Propeller. When the engine sputters to life, it sounds like Paul Robeson blowing the world’s loudest, longest raspberry.

My aviator is Mark Gannucci, a former Navy fighter pilot who’s spent the last 25 years as a commercial pilot for Southwest Airlines. He tells me he likes his airline job, but he flies with the Skytypers and for the Military Aviation Museum in Virginia Beach, Virginia whenever he can—he loves the history of these planes, the intimacy, the skill. 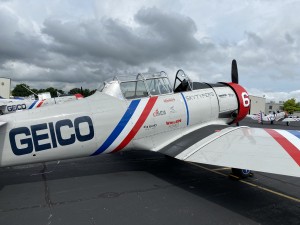 The plane is dove gray with a cute red clown nose and a Big Ass Propeller. // Courtesy Liz Cook

So fun, in fact, that Gannucci has agreed to take a reporter on a test flight on his birthday. He’s a good sport and a patient teacher. He straps me into a parachute, adjusts my helmet, teaches me about call signs—his call sign is “Gooch” (yes, really). You don’t get to choose your call sign, Gooch tells me; it just sticks to you. If you’re lucky, it’s a riff on your name. If you’re not, it’s a riff on something stupid you’ve done.

“It’s a vicious dog-eat-dog world in the fighter community,” he says. We taxi toward the runway with three identical planes. I remember Tom Wolfe’s frat-adjacent depiction of naval pilots in The Right Stuff and drop my voice half an octave, trying to sound tough.

“I’ll try not to blow out your eardrums by being a ‘woo’ girl,” I say into the helmet mic.

I do not keep my promise.

Before the flight, the Skytypers’ PR team kindly mounted a GoPro on the dash so I could record it. The footage is unusable because every second features me grinning like a lipless goon.

Over the course of one 20 minute flight, Gannucci and the team’s three other pilots go through all the air show maneuvers—World War II-era training formations that military pilots still use today. Gooch is kind enough to call them out by name, but I can’t hear anything over the sound of the engine. I give the formations names of my own: The Elephant Ear. The Uncut Gem. The Nosy Neighbor—that one is the hardest to get used to. I’ve only flown in a commercial airplane a dozen times, but that’s enough times to develop a healthy fear of flying handshake distance from three other planes.

At one point, we peel off from the others and I feel the giddy-making whoop of all the blood evacuating from my brain—a force composed of multiple Gs. It’s not unlike riding a roller coaster, provided the roller coaster has no track and instead shoots carts straight into the sun.

When I start to get queasy, I stare at the back of Gannucci’s helmet for a few seconds and meditate on the call sign scrawled there in a bubbly cursive font—I think Brush Script MT. Gooch.

The Skytypers show up at air shows all over the country, but they’re not just a demonstration team. They also skytype for hire. They’ve pooted out messages over Yankees games, Mets games, Boston Red Sox games. In 2016, they had to do an apology tour after skytyping Armenian genocide denial propaganda over the Hudson River. They helped a guy propose a couple of months ago—Gooch never found out whether the would-be fiancée said yes. 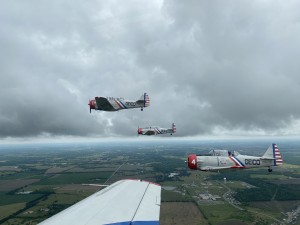 If you’re thinking about whether to go to the Air Show this weekend, my experience probably isn’t going to seem useful to you—it’s not like you’re going to ride in the plane. But I can tell you, at least, that seeing these planes in person is cool in exactly the kiddish, id-ish, spine-tingling way you want it to be.

You can be acres away and still feel a jolt of secondhand adrenaline watching one of the U.S. Navy Blue Angels careen down a suburban runway faster than Jesus. You can hear the surround sound roar of the U.S. Air Force Thunderbirds and feel your blood pressure spike as they get so close to one another, you can no longer pick out the wings. You can watch the Skytypers start to type and nurse a wild hope that they’ll spell out something more interesting than “GEICO”—nothing that would get them fined or canceled, mind you, just something fun, like “cattywampus” or “weasel”. You can do all that at the Air Show without leaving the ground.

If you see Gooch after the show, wish him a happy birthday. He’s a really nice dude.