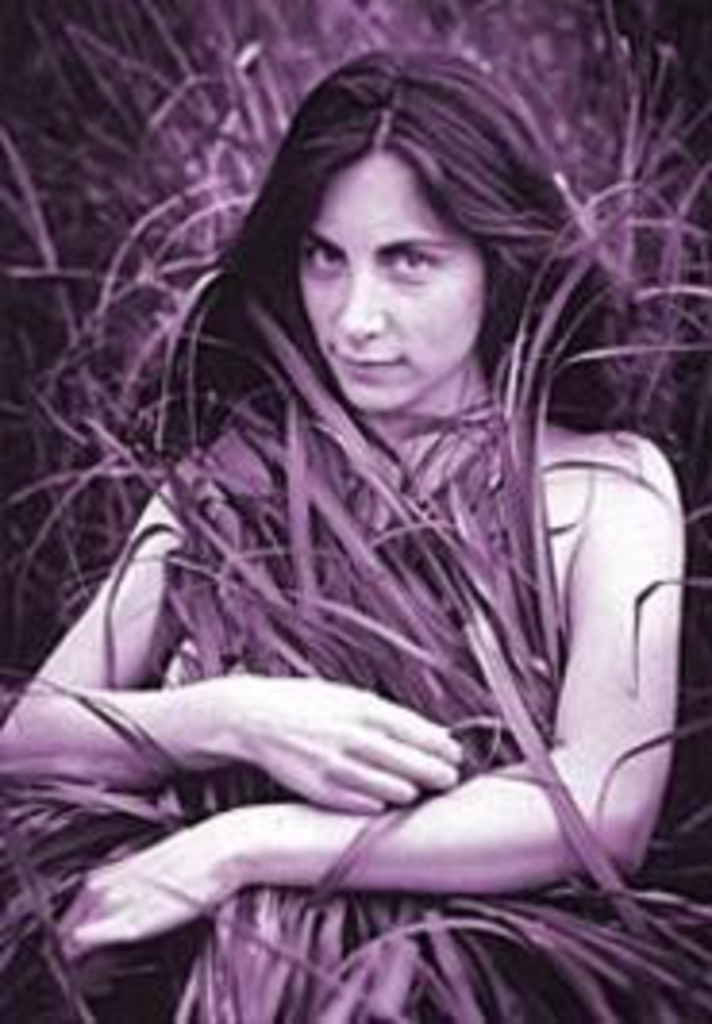 Was it Hallmark, or maybe Frank Zappa, who once called February 14 “this day of chocolates, milk, dark, bittersweet nougat, cherry-coated clitoris day”? If the front of the card depicts a split, bleeding pomegranate, you’re spending Valentine’s Day with Diana Darby. That vigorous portrayal of the biggest annual sales day for roses comes from Darby’s recent poem “Love Day,” which she posted to her Web site (www.dianadarby.com) last month. And the broken fruit is the cover of Darby’s debut album, Naked Time, an overtly sexual image that came to her in the middle of the night and will stir bad dreams in plenty who see it.

“There’s a difference between my poetry and songwriting,” Darby says from her Nashville home. “I hope that won’t always be the case.” Darby explains that she began scribbling her thoughts — mostly as poetry — at age 5 and hasn’t examined the urge much since. “I’ve survived by writing. The process is both introspective and depressive, so writing helps me into and out of things. It really does open up more and more worms.”

The worms that crawl out of the speakers during Naked Time come from a can of soured relationship soup. (The aversion to Valentine’s Day is seemingly unrelated. “There should be an anti-Valentine’s Day,” she says. “Because as it is, it’s a day where if you don’t have someone, what are you? And that’s wrong.”) The disc, beginning with the stark, ghostly “June Bug,” quickly veers from merely confessional to self-flagellating. I’d have no life without you/and in the end, I always end up on the floor, Darby sings on the vicious “Ragdoll.” But what’s most arresting about Darby, as lyricist and singer, is that she speaks softly, rationally. At her most shattered, Darby doesn’t launch a tantrum; she disappears in the darkness and whispers, daring you to find her.

“Even if you’re writing about another person, you have to have an emotional connection,” she says. “You’re never really writing about anyone else. There has to be some part of you that relates.” Some critics have called her confessional writing fearless, something she shrugs off; Darby is only getting warmed up. “Some of the new songs I’m writing are more angry and even more naked.” Though it’s hard to picture Darby shedding more of her guard than she does on the ironically titled “Sweet Conversation,” which begins Bleed me from morning ’til daybreak, she promises at least one new song about patricide that will be set to music she describes as “like a music box, pretty and scary.”

Darby will be the first to tell you that her family has been less than supportive. “I’m still the black sheep,” she says with a laugh. “My sister is a doctor. In my family, you’re expected to practice medicine or law. So when I was studying poetry, it was like, ‘Be a doctor and do the poetry on the side.'” So Darby took theater and poetry classes to break up the tedium of the advanced science courses required of a premed student and eventually earned an MFA in writing and directing. “I can’t remember what my mother said to me this morning,” Darby says. “She was telling me something like, ‘I always knew you’d make us proud,’ then telling me that my record is so sad.” Darby’s voice communicates the wry resignation of someone whose family ties will always be strained by awkwardness and expectation. “My parents ask me why I don’t write happy songs. I say, ‘You were there.'”

But, then, would you want your daughter writing for Full House? After the Houston native completed her studies in California, the first job she scored was crafting one-liners for the Olsen twins on the last year of ABC’s Friday-night bread and butter. It’s hard to say which is stranger: that Darby would go on to write sexually charged poetry and songs or that Full House survived eight full seasons. (Of course, Bob Saget always peppered his stand-up act with gross-outs and coarse language to separate himself from kiddie-show hell, so maybe Darby’s “working blue” isn’t a shocker after all.) For devoted fans of either the show or Darby, here is a Web fan page’s description of the only show for which Darby received a teleplay credit, episode 181, “The Producer”: “On Bring Your Daughter to Work Day, Danny takes Michelle to the studio. After the show, Becky gets a promotion to producer of Wake Up, San Francisco. Danny doesn’t like that idea and quits. Meanwhile, D.J. and Steph bet who can resist sweets longer, and Joey has to deal with a Weasel-less future.” Not a vaginal metaphor in sight.

“I think of myself as a writer, and someday I want to move into novels, like when I’m old and can’t perform anymore,” Darby says. She is still new to playing live, still prone to the seesaw of stage fright balanced against postperformance bravado. “I usually end up asking myself why I was so worried,” she says. “I get performance amnesia, forgetting I’ve done it before. But I’m not used to this. I haven’t been performing all my life. And I don’t get involved in the business stuff or the gossip or the opinions. I stay in the closet and don’t pay attention to what everyone else is doing. I don’t have a problem being compared to other singers, and I’m familiar with the ones that are mentioned most. People like to label, so I’ve come up with calling myself a confessional depressant.”

And Darby is a strong believer in written epiphany, personal discovery, journal writing that stays raw. She has been teaching for two years, working at a museum called Cheekwood. While spending time as a volunteer counselor for teens, she found that encouraging kids to write was the way she could best reach them. “I don’t believe in the traditional school model, the five-paragraph themes,” she says. “You should write like you talk. They were surprised to have me come in and say, ‘I don’t care what you write about. I don’t care if you use four-letter words.’ Their level of detail after a short time was great. I like to try to get people to write who like writing and help them progress.” In her adult classes, she uses poetry to put staid suburban men in touch with their inner D.H. Lawrences, grading work that advances from early, refrigerator-magnet-ready rhymes to unfurled erotica.

“I studied poetry for a lot of years. That’s my first love,” she says. Darby worked with poet Jack Grapes, forming a style based in part on his exercise Wild Dark Passion. “You write from the energy of passion, which is what I try to do with my songs. It’s almost like stream of consciousness. Now I pick up my guitar and words just seem to come. I feel an emotional trigger and start playing.”

After moving to Nashville, Darby began working as a collaborative songwriter. A chance meeting with producer and Delmore label head Mark Linn at a Guy Clark show set in motion Darby’s birth as a performer and solo songwriter. “I’d always been a word person, cowriting a lot. Mark liked what I was doing by myself, and little by little we realized it felt like an album.” The disc reflects its intimate construction; Naked Time was recorded fitfully over a period of months and heard in finished form only by Darby, Linn and engineer Lou Whitney before its release. Darby has been rewarded with a groundswell of praise from the alternative press and fans who follow her from appearances at Borders to tiny rooms at coffeehouses and bars. It’s not overnight stardom, but it is the way some singers got very, very good without worrying about market pressure.

Darby hopes to begin work on a second disc this spring. “My writing is changing. I’m finding my own voice. On Naked Time, some people think the song ‘She Won’t Be Quiet’ is out of character, but they weren’t listening. It’s not just the only rocker on the album. It’s an important song for me.” She’s been so quiet…. She won’t be quiet no more, the chorus announces. The song points to the road ahead for Darby as she finds not only her voice but its volume as well. And turns it up.