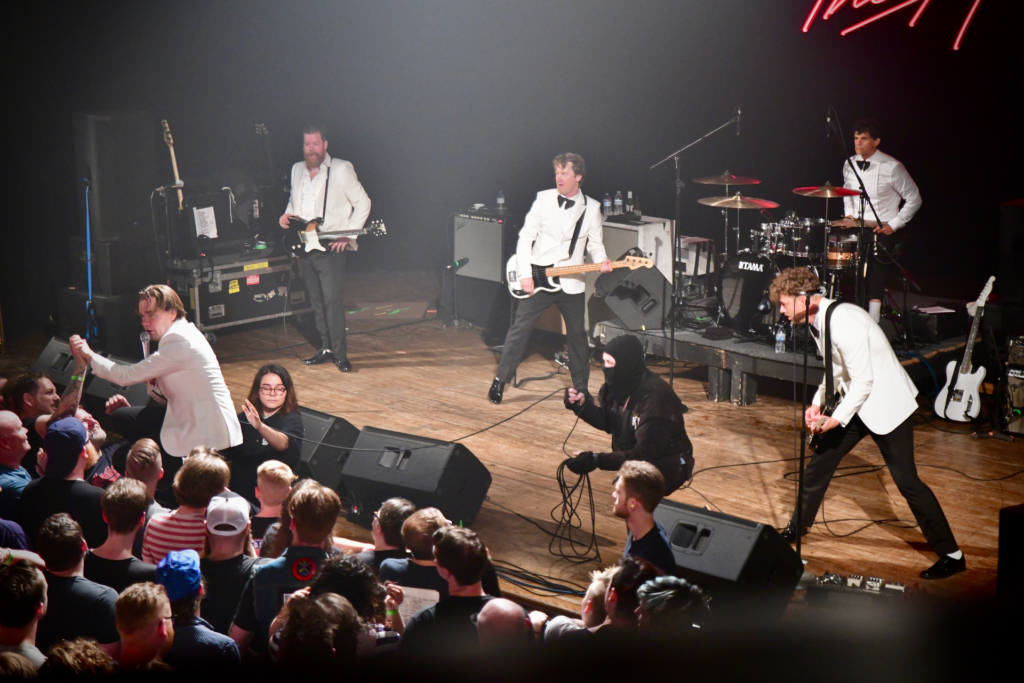 Apart from a contentious World Cup match or a weekend in Lindsborg, it’s hard to imagine hundreds of Kansans together in a big room chanting “SWE-DEN! SWE-DEN!” But chant that we did last night at Liberty Hall, where the Hives and Refused brought their “Swedish Scream Team” Tour. It was the first Lawrence show from the Hives in several years and the first post-reunion stop from Refused. (Possibly Refused’s first local stop ever? Nineties punks, help me out.)

The nostalgia-addled, awkwardly mohawked, and patch-jacketed punks who spend years and years waiting to see Refused can argue with me about this, but the Hives was last night’s superior act. The Hives has toured nonstop for about two decades now, refining their live show, and every moment of their 70-minute outing was vital. These are some of the finest showmen in modern rock.

They popped onto the stage in white, secret-agent-cool, matching tuxedos and launched into the garage-gone-arena-rock pump-up song “Come On!” This is not a band out to reinvent the wheel; they’re just crafting a sleeker design of it. More than almost any other active rock band, the Hives have the Ramones-like ability to rearrange and repackage their most iconic riffs and tones into new songs you love just as much as the old ones. “Come On!” sounds like “Main Offender,” which sounds like “Go Right Ahead,” which, again, is pretty similar to “Tick Tick Boom.” But hearing them one after the other wasn’t repetitive at all; it was just a blast. Grown men with graying hair boogied through the pit as young fans pogoed to exhaustion. 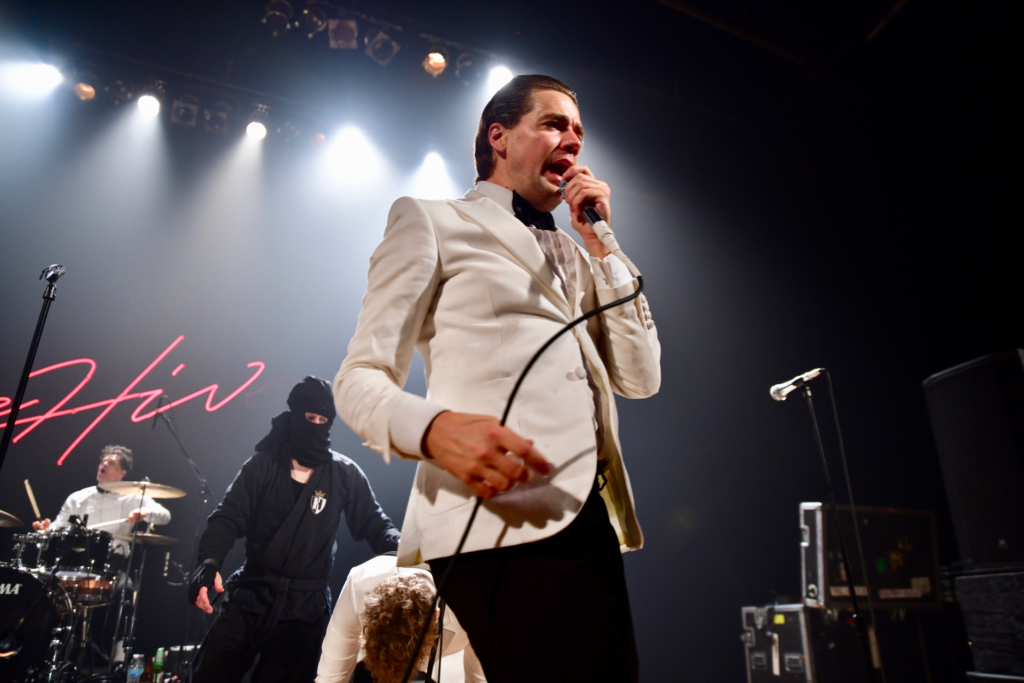 Vocalist Pelle Almqvist was in constant motion, swinging his microphone, kicking higher than most 40 year-old men dare, climbing and jumping from stacks of monitors, tip-toeing across the barricade. He took a stroll through the audience on a few occasions. The band never missed a beat. In between songs — as panting members recovered from (literally) kicking out the jams by leaning against their amps or sitting on the drum risers — Almqvist engaged the crowd with dry, charming banter. When one dipshit fan had the nerve to shout, “Shut the fuck up and do it!” as the band was preparing its next song, Almqvist held the microphone in his direction for him to continue, only for the band to drown him out as he opened his mouth. Another overzealous fan who leapt on stage met a similarly comedic fate when one of the band’s masked guitar techs bear-hugged him and quickly pushed him back down to the floor. The lesson here, on every level: The Hives are not to be fucked with. 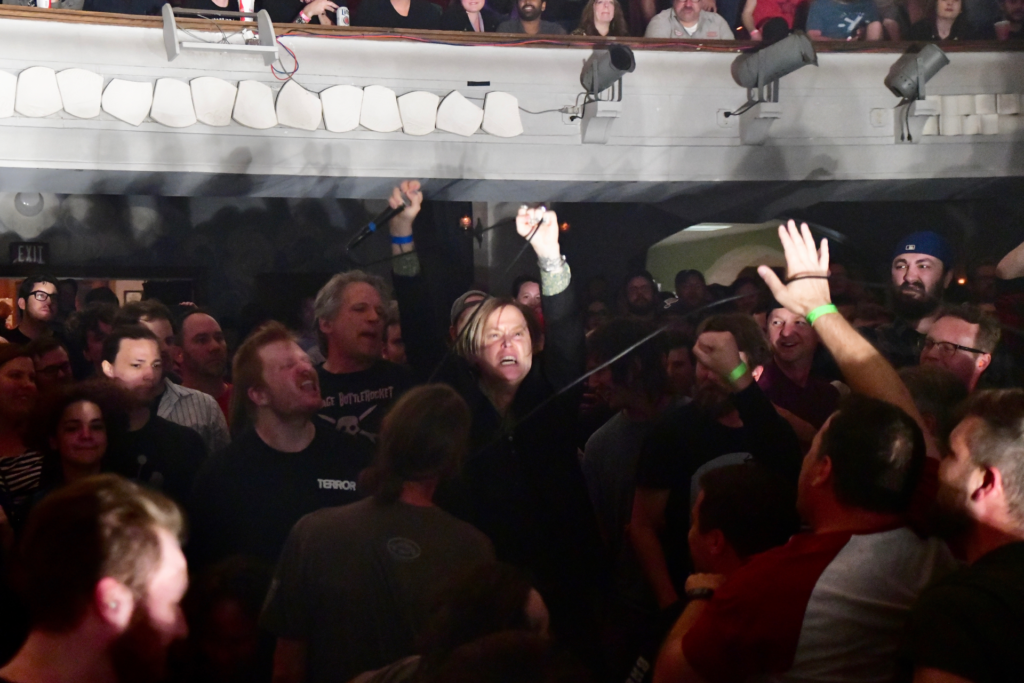 Refused’s hourlong set came in three parts, split by lengthy spiels from singer Dennis Lyxzén. The group’s first 15 minutes or so included some of the most electrifying live music moments Lawrence has seen this year. The band came out swinging, packing every second with vigorous punk rhythm and post-hardcore groove. Lyxzén’s powerful screams and flamboyant dance moves kept fans on their toes.

Lyxzén’s first speech opened with a crowd greeting followed by a Patti Smith quote and some thoughts about how rock and roll should be revolutionary. “There’s a reason we’re not at the fucking discotheque,” he said. (Not to nitpick, but discos have long provided a home for marginalized communities, and they also helped produce the revolutionary genres of funk and hip-hop. Somewhat ironically, a later speech was largely spent decrying racism, homophobia, and misogyny, directly calling on white men to help dismantle those systems of marginalization.) 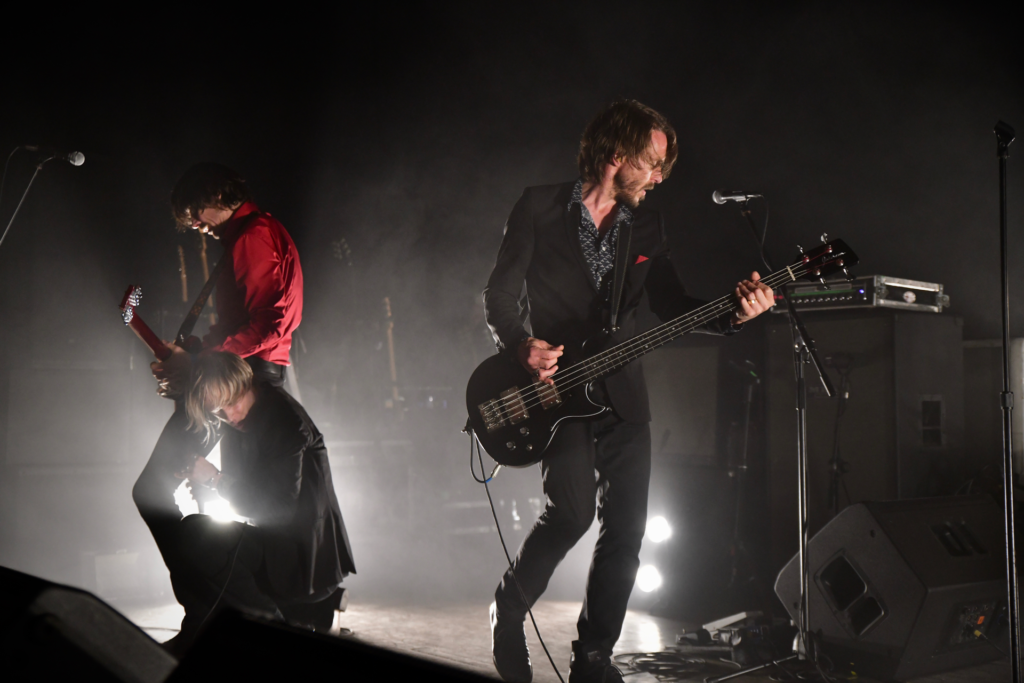 The songs that followed this first rant, particularly “Liberation Frequency,” felt far less radical. We want the airwaves back, Lyxzén screams in the chorus, and it was hard not to wonder whether the song is more about longing for the days of rock music’s supremacy rather than the truly revolutionary acts that once coincided with those sounds. “The Deadly Rhythm,” a popular cut from the band’s seminal 1998 album The Shape Of Punk To Come, included a false ending that led into the band briefly jamming Slayer’s “Raining Blood,” which felt like a band practice joke taken too far, as if to convey to the crowd: We know we’re kind of serious, but look, we can have fun, too! As the set approached its close, Refused ratcheted things up. Throat-shredding classics like “Refused Are Fucking Dead” and “New Noise” went off without a hitch, sending shouting, finger-pointing crowdsurfers flooding over the barricade as strobes flashed.

Opening the show was the Los Angeles indie rock crew Bleached, which played a 30-minute set centered around guitar-playing sisters Jennifer and Jessica Clavin. The band’s shimmering, upbeat pop songs were danceable while retaining the thoughtful guitar hooks necessary to keep the interest of the more straight-ahead rock fans in attendance. Much of the set consisted of this lighter, new material, but one throwback song showcasing the band’s garage-punk roots revealed bits and pieces of those days still present in the new songs.