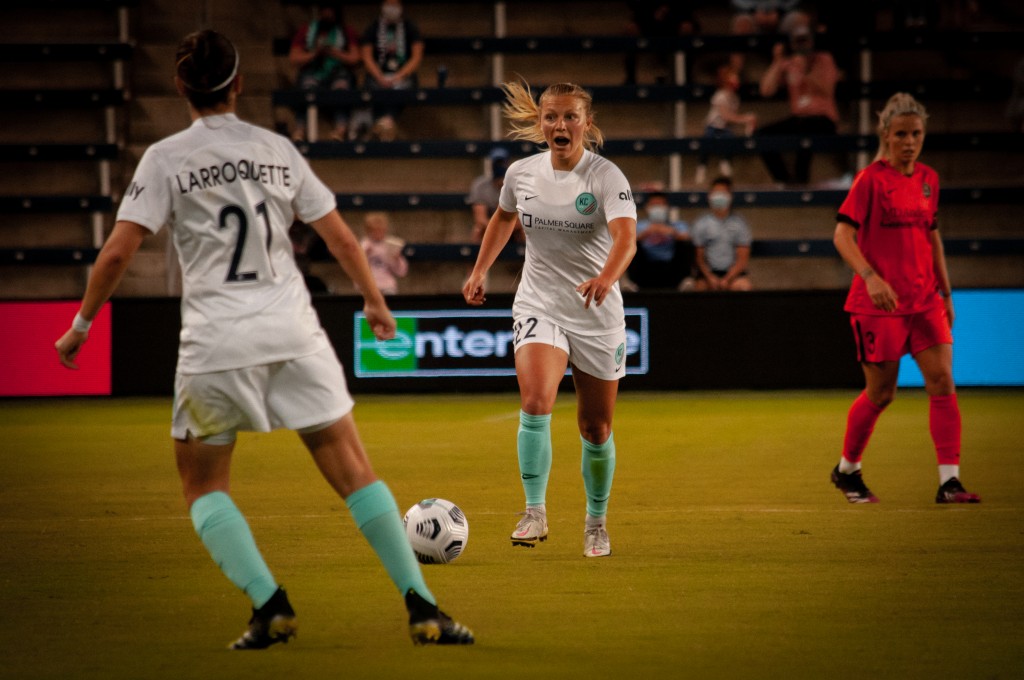 In second grade, I played soccer. Or more accurately, I stood on a field with other second graders. Perplexed. We occasionally ran. Sometimes in the same direction. Not always. With some luck, a ball would be involved. Once, as goalie, I stepped back inside the goal while holding the ball, costing us a point for reasons that were never fully explained to me. On a different occasion (me being a freakishly tall second grader) a much smaller kid ran between my legs while I was running. We have it on film. It was like the Griswold family driving under a truck in Christmas Vacation. I failed to notice it occurring.

My big takeaway from that period was that being a fan of soccer is difficult. In that, I suppose, finding ways to actively engage as a supporter is difficult. My parents—and all other parents standing around the field—seemed capable of shouting only “Kick it!” or “Run!” with no other variations. That was the full extent of how one could enjoy the sport as a witness.

Two years ago, a pink-haired firebrand on the U.S. Women’s Olympic Soccer team said that she didn’t think our then-president would give a shit about their gold medal victory. It made many dumb-bad people very upset with her, including the then-president. That’s when my wife and I started caring about U.S. women’s soccer.

We’ve watched maybe a hundred games since then. Luckily, our favorite bar on 39th street (*The Drunken Worm*—come find us there) agreed to start allowing us a single dedicated TV for watching ladies kick balls. Once they gave us this gift during a Royals game. While there are a dozen other TVs in the same close proximity, this led to one bar patron becoming cross with us. And Greg, wherever you are, you can still go fuck yourself. Women’s soccer is more exciting than all baseball put together, and you know it.

Vivian and I had still never picked a favorite team. For all the U.S. soccer clubs across the country, we figured out the big players and general vibes, but mostly just wanted to see everyone have a good time. The matches have been fun to watch. And, despite the time invested, we still understand only about half of what’s going on. We’ve looked up what the penalty “offsides” means on multiple occasions. Neither of us could explain it to a third party, but I think we grasp the basics.

This is why *Ted Lasso* was such a boon. The Apple TV+ show starring local hero Jason Sudeikis features a KC football coach who winds up leading a British soccer team, despite knowing nothing about soccer. Most of the things Ted says on the show directly parrot phrases my wife and I have shouted: including asking a ref in the final episode of a season if he could *please* explain how offsides works again. It’s good to see that I am in the same boat as the most overwhelming charming KC man ever portrayed on television.

Recently, KC got a women’s football club. This is actually a return, as the women’s league was started here, and then our team went away. Now that we’re back, Vivian and I do have a team to ride or die for. And ride or die is what they deserve.

The FCKC played their first game in Portland, against Portland. Women’s soccer is a notoriously supportive, pleasant spot for the participants. In the entire history of U.S. Women’s Soccer, the most red cards [dismissal from a game for unsportsmanlike conduct] has maxed out at two cards in one game. In the closing moments of *our first game back*, there were four red cards handed out and a brawl erupted on the field. So yeah. I guess we’re letting soccer know exactly who we are. Are we gonna be that bitch? We’re gonna be that bitch.

The problem is that our team still doesn’t have a name or mascot. Previously in their existence here, FCKC just went by that title. But the time has come to make something more exciting for our brand. I’d like to propose that we become the KC Possums.

There is an urban legend about how at the formation of our city, the six dudes who made the decision on naming KC found “Kansas City” bland as hell, and so one drunk S.O.B. said, “Sure that’s neat. Why not just call it, I dunno, Possum Trot?” And there was a near split on the vote. So we were almost named Possum Trot?

Thusly, I think a contrarian drunken bit of nonsense that has a historic root in our city’s DNA seems like it fires on all cylinders for what our team should be called. And I can’t wait to go to the games. When we’re down, we can always pretend we’re doing it on purpose and call it “playing possum.” And the rest of the time? I’ll just shout “Run!” and “Kick it!” just like my bored parents taught me.

If KC Possums doesn’t work for a name for you, maybe just throw “KC” in front of any of these alternate names I came up with after having a vodka and soda: