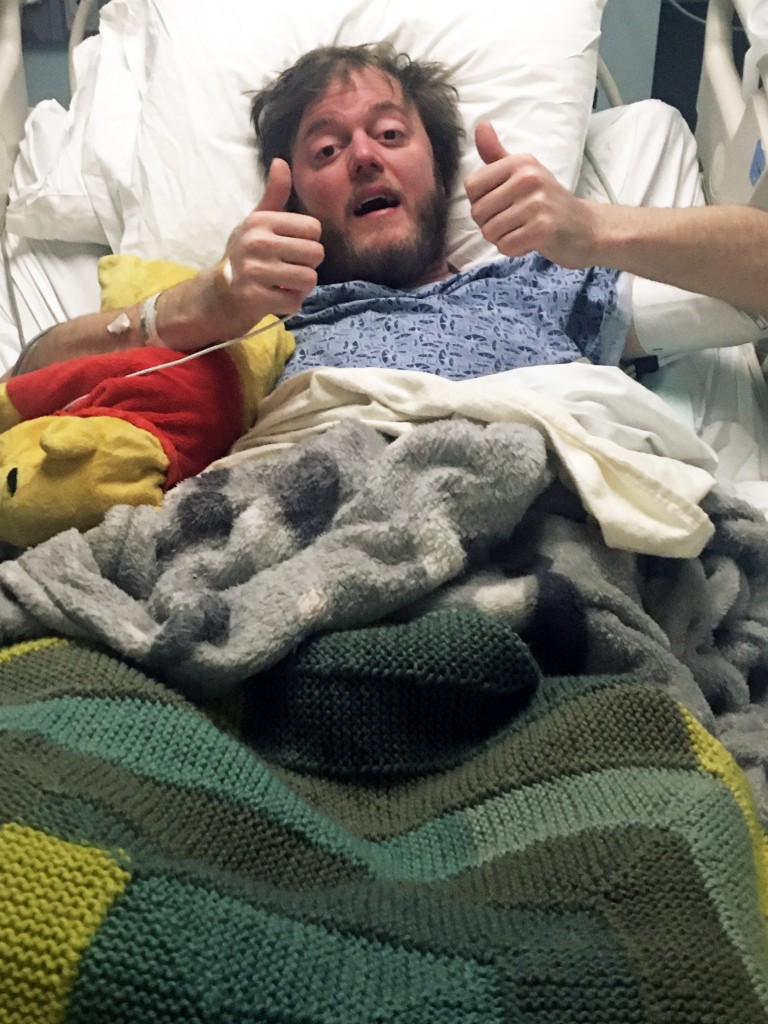 Brock uses a double thumbs-up system to indicate when he is dying and in Hell. // Photo by Vivian Kane

My nurse backed away from me in abject horror. Seemingly out of viable options, we’d reached a point where there were no solutions to the long list of needs my doctor had demanded. There was blood everywhere, yet not the right kind and not collected in a viable manner. We shared a glance wherein two professional, reasonable adults were able to transmit a simple, shared truth: We had failed. Despite this mutual acknowledgment, my nurse swabbed my arm and went back in for a final attempt. What she attempted did not work, and I let out a gasp of pain. Not a shout and not a startled cry, but an expression considerably more defeated than a sigh.

My nurse recoiled. She took a moment to compose herself. I’d never seen anyone in the medical profession exude such fear and frustration. I was already at the end of my rope, but to see such sentiment echoed on the face of a professional undeniably spooked me.

“To touch you is to hurt you,” she said.

It was both a damning evaluation of my condition but, undeniably, also an annoyingly scathing criticism of my masculinity. A 6’7” man who cannot stop crying isn’t an everyday sight, and even in the tersest moment, there remains a societal impulse to acknowledge that it’s pretty damned funny.

“You earned this one,” she said. “Maybe we stop crying after this.”

I nodded in agreement. “Maybe we do.”

At the very end of February, I started feeling bad. I use “bad” because the general set of symptoms and issues ran the gamut from headache to blurry visions to vomiting. Like any idiot dude, I thought I was just gonna plow through. Toxic masculinity is a helluva drug.

I took a rideshare car into work and showed up for some meetings at The Pitch that I don’t remember a moment from. I wasn’t mean to anyone, so that’s all that matters to me in retrospect. The night before, I fell out of the shower and pulled the shower curtain down atop me. I fell down a flight of stairs. I don’t remember these things either. Like any idiot dude, I thought I was just gonna plow through. Toxic masculinity is a helluva drug.

My throat closed up and I lost the ability to breathe in the middle of the night. I went to an emergency room where I walked in and said: “Help please.” I immediately passed out and don’t remember anything for the next 48 hours. I apparently took an ambulance ride from one hospital to another. When later informed of this, I was furious because I know what that costs.

In the ICU, I lacked the ability to speak. Everything about my situation seemed like a stroke, or perhaps brain damage. Via a series of grunts and gestures, I demanded my wife hand me a plastic surgical glove from a dispenser on the wall. I took it and began spitting into it. No, I have no explanation for that one. Later, I stood up and pulled out every IV attached to my body. When the staff physically blocked the door and asked where I was going, I responded by saying “I have a mission.” No, I have no explanation for that one, but I almost certainly thought I was The Terminator. Had I died that night, at least I would’ve gone out on a bad-ass line.

The next period was the worst experience of my entire life. I didn’t sleep a wink. I began to hallucinate wildly. I had so much blood taken for testing that it became impossible to find more blood to extract. My entire body looked so bruised and beaten that lifetime medical professionals would take a look at me and just start apologizing. That’s never a great sign.

I spent a week in hospital. By far the longest medical stay I’ve ever experienced. I know that I am lucky in that respect, compared to the lifetimes and the medical complications of almost everyone that I know. I am also lucky to have had such an attentive, caring group of doctors and nurses surrounding me at all times.

My shit got figured out. I’m doing much better. However, there were two incredible low points that will always stick with me, which are perhaps the point of sharing this story.

After the first couple days, I was no longer in danger of dying. But each morning, my primary doctor would walk in and her first declaration was “You are not going home today and do not fight me on it.” By day four, when she said this, my first reaction was to immediately look for a fire escape or window to escape through. A few years back, I had a brief stay in an LA hospital. It cost $30,000. I have pretty great health insurance, and it cost that amount. So imagining what a week plus was starting to total up towards, along with assorted tests and ambulances, sent me spiraling into wondering if my life was even worth saving if these costs would just be passed along to my wife. Again, I have better than average health insurance. I have no idea how anyone survives and/or lives to thrive in the only first-world country without universal healthcare. Maybe keep that in mind when November rolls around.

The second low point was self-inflicted. I had nothing to do all day, so I left the news on my hospital room TV. I watched novel coronavirus begin to find footing and spread. I saw everything from measured, aware responses to sheer fear. At one of my lowest recovery points, when every part of my body was wires and tubes hooked into loud machines, I began laughing uncontrollably. “Why am I going through this Hell,” I thought, “if I’m only going to get out just in time to die from New Plague?”

I am doing much better. At least from This One Problem. I’m happy to be back at home with my wife and cats. I fully intend not to die. I’m usually bad at following through with plans, but I meant it this time. I refuse to be defeated by something I cannot see. I’m trying to get back to normal. If not for myself, at least for everyone around me.

My perspective aside, I did emerge into a world that seems to be escalating exponentially into a situation that few of us were prepared for, and which devolves to new lows with each passing day. All of us have that moment wherein we internally said “Oh shit, this is real.” For some it was the cancellation of SXSW. For some it was the delay of the entire NBA season. For me, it was our bulk toilet paper subscription service emailing to say that all the toilet paper was gone. Folks, I dunno. I guess I never thought that’s the form this would take. As someone who spent most of his life engaging with literature, films, and video games based around the end of the world, not once did anyone propose an apocalypse that involved us all slowly deleting every event off of our Google calendar, until all that remained was bank holidays and personal deadlines.

Which brings us to where we are now.

I don’t know what’s happening out there. I don’t know what happened between me writing this and you grabbing a magazine off the street corner. I’m not in the prediction game and dear God am I not a medical professional. But as Editor-in-Chief of this metro-wide publication, I know that the entire team here at The Pitch has a responsibility to serve you. Online, I’ve posted a manifesto called “Well Shit.” that sets forth our dedication to providing important coverage during this time and also providing the dumbest, funniest set of distractions and hilarious stories that we can.

This issue of our magazine suffers due to these recent complications. We have interviews around events that are no longer happening. We have a calendar that lists a month’s worth of events that we hope are happening, but at press time we have absolutely no idea. We have, in general, some pockets of excitement that we spent weeks writing up for you, and we have no idea if they will have faded into nothingness by the time this reaches you.

Follow us online. Visit ThePitchKC.com whenever you can. Print media is very pretty, but our site, as our social media, are where you’ll find us working day-in and day-out. Even if it is dispatches from our emergency bunkers. And if you’re getting something useful from us, please consider donating a few bucks online. Our magazine has always been free, but just as both you and I are feeling crushed right now, so are some of our advertisers, and we’d hate to see a 40-year-old publication be yet another casualty of this epidemic.

Regarding further casualties: on the Pitch website, we have a list of canceled events and closed businesses that we update hourly. Please give that a bookmark to stay on top of everything that’s happening.

This brings us to the issue in your hands today. Each April, we traditionally do an issue with a bit of a 4/20 slant to it. The writers here at The Pitch put together an incredibly chillax issue, and we truly hope you enjoy it.

Here in Missouri, we’re trapped in an oddly stupid position. Legal pot cards and registration all have the green light, but dispensaries aren’t allowed to open until June? All these people have the green light to acquire the Devil’s Lettuce but have no ability to do so. I’m not sure if you’re aware, but my personal opinion is that sometimes the government is both bad and dumb. Sorry if that offends.

But also: Goddamn. If there was ever a time to let people have access to gummy bears to erase their anxiety, it should’ve been right now. Just a whole lot of things not lining up right now. I guess life’ll do that from time to time. At least there are vague paths towards healthcare and help, even if the paths might be circuitous.

Things seem down. They are indeed down. As always, I believe Kansas City will do its best. We’ll be a shining beacon for others. The folks here absolutely rule, and we will always put a neighbor before ourselves. We just need time and trust. I don’t see us running out of either.

We will make it through. I’m here for you. Be here for those around you. Nothing can beat us.