Let There Be Darkness 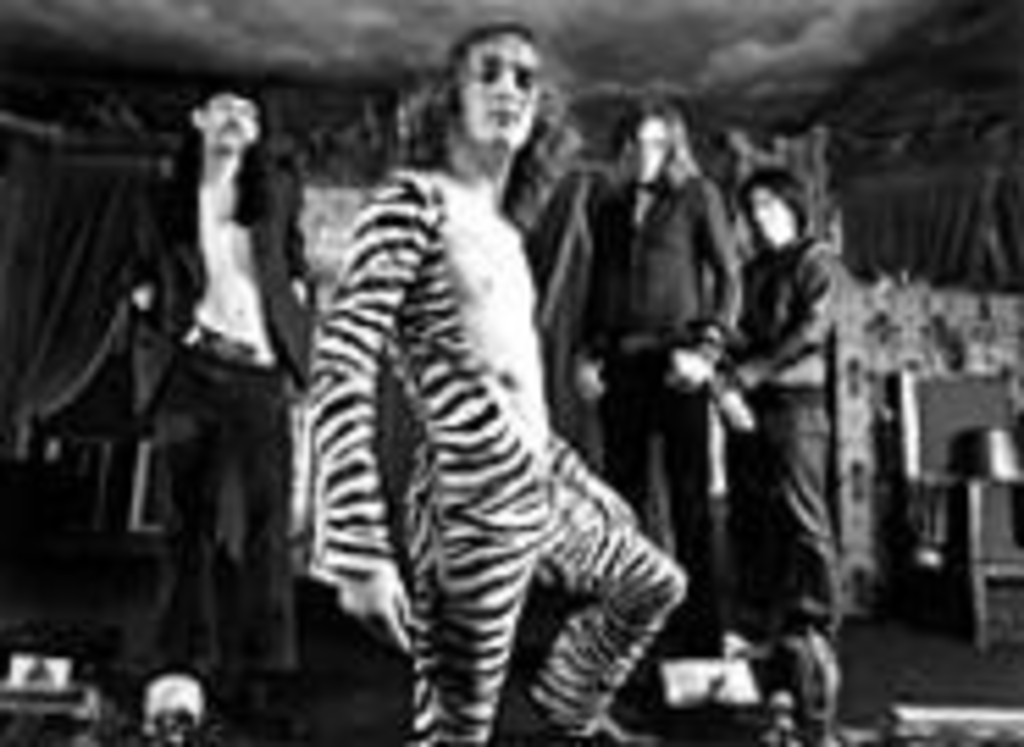 It’s so easy to laugh at metalheads because it’s so hard for us metalheads to laugh at ourselves. You’d think a genre that came of age in a codpiece, that once rocked bangs high enough to imperil aircraft, would inherently have a well-developed sense of humor. But alas, headbangers are a terminally overserious bunch these days. And no band exposes this fact better than the Darkness.

With the band’s debut album, Permission to Land, soaring beyond platinum sales, the hot-and-bothered Brits are the biggest thing to hit these shores since the bulge in Nigel Tufnel’s trousers. All but one show on the first leg of the band’s U.S. tour sold out. And now they’re back for more.

The Darkness is winning over the masses, thanks in part to MTV’s nonstop airing of “I Believe in a Thing Called Love” and “Growing on Me,” the latter an upbeat ode to contracting an STD. But the band has also polarized the metal community, which you’d think would compose its most obvious audience. Whereas some headbangers are eager to join in on the good-natured revelry that has made the Darkness famous, others cry that the band is goofing on their scene.

“To be perfectly honest with you, I think that the Darkness is a joke, and that’s, unfortunately, exactly what the world wants,” Disturbed frontman Dave Draiman sniveled in Metal Edge magazine. “The world wants rock bands to be idiots. The world wants rock bands to be these bumbling buffoons, these morons who made fun of themselves and their music and their art, and don’t take themselves seriously in any way. It’s all supposed to be a joke. It’s unfortunate.”

How a guy like Draiman, whose protruding chin piercings make him look more like a coat rack than an actual person, can take himself so seriously is beyond me, but there can be little doubt that the Darkness is much more in touch with the true spirit of heavy metal than he ever will be.

“Rock and roll has always had a sense of humor,” Darkness drummer Ed Graham tells the Pitch in a phone interview from London. “Look at AC/DC.”

He ain’t kidding. In the late ’70s, bands could be serious and snide at the same time, and no one thought twice about it. (Hell, most rockers of that era never bothered to think once.) Blue yster Cult’s odes to rogue reptiles, Ted Nugent’s gonzo guitar playing and Black Sabbath’s pseudosatanic posturing — which even they later admitted was a joke — proved that bands could be goofy and great.

No metalhead worth his weight in denim would ever deny the artistry of a song like AC/DC’s “Big Balls,” but can anyone seriously argue that it’s any more prosaic than the Darkness’ “Love on the Rocks With No Ice”?

Of course, everything went to hell in the ’80s with the cartoonish metal of Britney Fox and Poison and Trixter. Then the ’90s gave us the scowl-at-all-costs sounds of Nirvana and Korn. For years now, metal has been no more than a cliché of forced angst. Face it: Godsmack and Staind parody the genre better than the Darkness could ever hope to.

In an era of mopey metal millionaires, the Darkness has come to lighten us all up. And still there’s more to the group than just punch lines and power chords. There’s sweet sentimentality in songs like “Friday Night,” in which Hawkins recounts a childhood crush. It’s also proof that the Darkness isn’t merely being ironic when it throws up the devil horns.

So c’mon, fellow metalheads, have a chuckle at your own expense. Everyone else is.