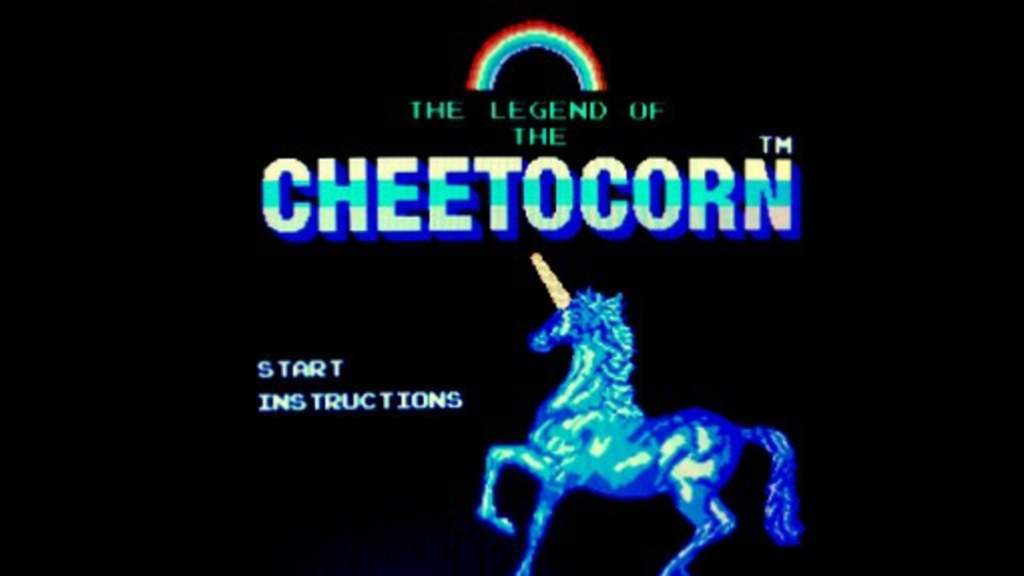 Purists (and by that I mean my college roommates) agree that the best video game system ever was the Nintendo Entertainment System, affectionately known as NES.

The system’s teeny tiny 8 bits was most people’s first introduction to Mario, Zelda and Donkey Kong. Now you can add CheetoCorn to that list. It’s a non-secret that many NES games are available to play free online so Cheetos decided to invent a new one. It’s a logical step when you consider how many hours that NES and

The premise of CheetoCorn is simple: You play an office worker who magically turns into Fabio and ride a rainbow unicorn that shoots fire out of its horn (the X button) and can jump magically high (space bar). In your journeys, you gather Cheetos by defeating sinister enemies like evergreen trees. Your unicorn has the magical ability to turn these Cheetos into deadly farts (Z button) that can be released on end-of-level bosses. Through the levels you make your way to Castle Pickle-Hands to rescue the princess, who’s being held by Dr. Pickle-Hands.

I didn’t know it was possible to build a parody in 8 bits but Cheetos has succeeded with this game. Mario enthusiasts should recognize Level 2, and Donkey Kong lovers will like Level 3.

CheetoCorn is available on Cheetos’ Web site. Be sure to have the speakers turned on, as the makers nailed the NES cheesy heroic game music.