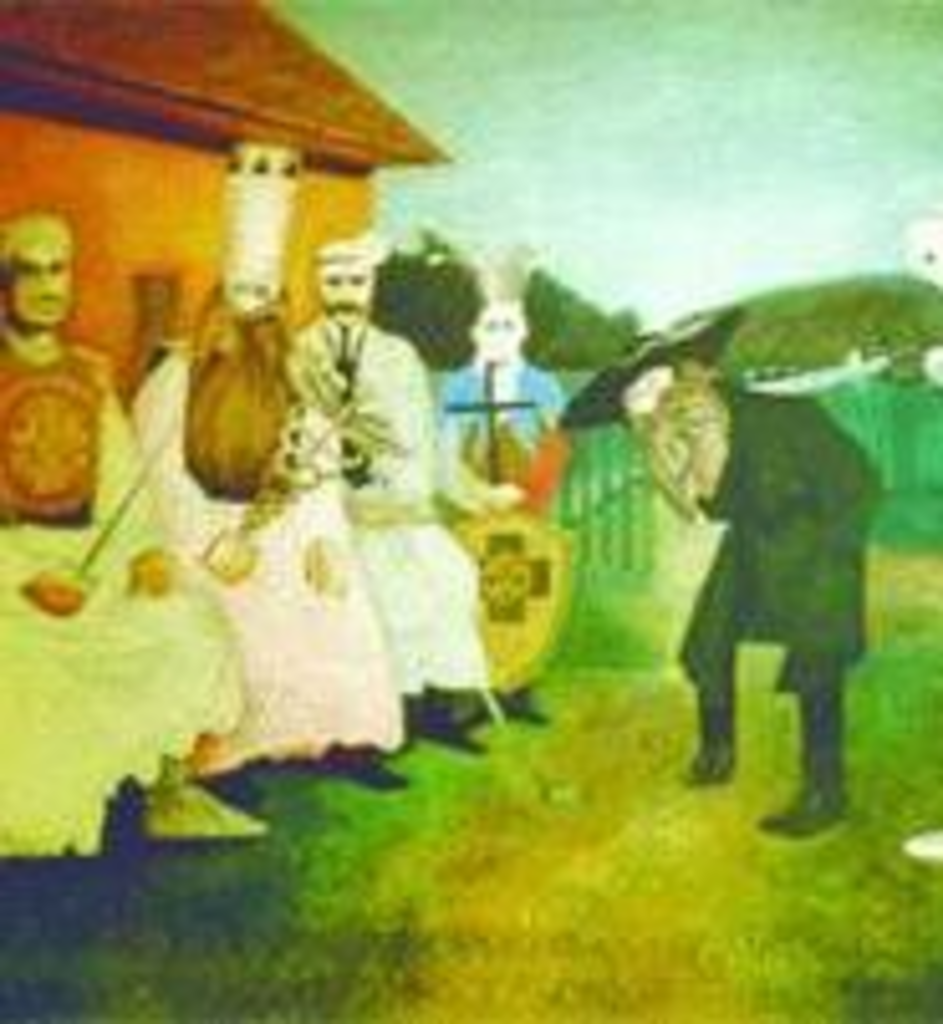 His social concern is nurtured by his mixed heritage — he’s half American Indian and half white — and he has said he hopes that his large oil paintings can “change history.” But he’s more than a muckraker or whistleblower, a moralizer or mere cataloguer of past injustices. Wildcat is a dramatist, and he prefers to paint tragedies.

One recent weekday, an art professor had brought his class to Rockhurst University’s Greenlease Gallery. Viewing Wildcat’s Epic Paintings in the company of an eclectic group of students is one of the perks at a university gallery. It’s fun to eavesdrop on the chatter — all of which stops in front of “The Pawn,” Wildcat’s chilling portrayal of planned mass murder. At that point, the professor’s questioning — “Do you all know about the Armenian genocide?” — seemed more than a bit intrusive.

Inspired, if that’s the right word for it, by that genocide, “The Pawn” depicts a sober cleric and a political leader solemnly overlooking a diverse group of lonely figures: an impoverished family, a lost child, a veiled woman. The religious leader and the politician appear to be in charge and, therefore, responsible for the suffering of the people before them. The tragedy is that free men have apparently failed to prevent evil from happening.

But Wildcat’s images seem to say more than just that something horrible has happened. Like “The Pawn,” paintings such as “The Strategy” (which deals with Manifest Destiny), “The Quest for Freedom” (the civil rights movement) “Health Care” (death itself) are about the tragic conditions that human beings must sometimes accept in exchange for freedom and life.

You don’t need a patronizing art professor asking whether you know that the United States has “the worst possible health-care system imaginable” to appreciate “Health Care,” Wildcat’s least historical and most symbol-laden work. The scene is the sort of medieval morality play in which characters personify concepts — Everyman, Death, Pride, etc. Here, though, the actors are Americans. Judges, bishops and priests have been replaced by a panel of doctors and insurance adjusters, with an AMA medallion, a stethoscope and a golf club replacing the cross and the Virgin Mary. The figure of Death pushes a sick peasant before this panel. (Wildcat’s artist statement reveals that he surprised himself by unwittingly painting a Death that looks “frighteningly like the hazardous materials workers of the 21st century.”) The peasant’s life appears to be in the hands of the medical establishment, but Death has more power than doctors and can be faced only through art: “ART IS LONG. LIFE IS SHORT,” Wildcat writes, paraphrasing Hippocrates, the Greek father of medicine, in large letters at the bottom of his canvas. “THE MOMENT IS BRIEF. THE EXPENSE IS GREAT.”

The most impressive painting here is “Quest for Freedom,” five canvas panels almost 9 feet high and 30 feet long, depicting figures from the civil rights movement and the 1969 lunar landing. Wildcat contrasts these two events to further underscore the tension between freedom and tragedy. John F. Kennedy’s dream to land a man on the moon is fulfilled, but a dejected Martin Luther King Jr. sits despondently below the triumphant astronauts.

Like many of Wildcat’s portraits, the renderings of the Apollo 11 astronauts appear to be reproductions of famous photographs, but Wildcat has reclaimed and repositioned these icons of the past.

Is that enough to change history? If a few students leave the Greenlease Gallery with a renewed sense of tragedy, freedom and identity, then probably so.