Kye Colors serves as Kansas City’s rap Batman on With Love. By Faith. 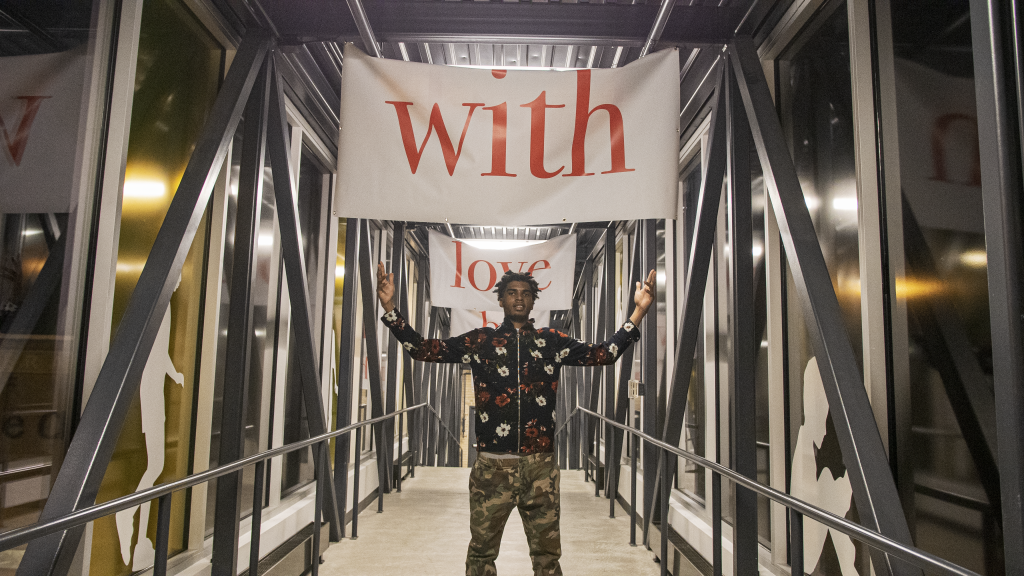 Two weeks before the release of his new project, With Love. By Faith., I made a Zoom call to Kye Colors and one of his Wasteland Records co-founders Jaron Baston. At one point in the call, Baston likened Kansas City to Gotham City in regards to the Wasteland name and their mission to make our hometown a more equitable place to live. I asked Kye if he felt comfortable being compared to Batman. His only answer is a laugh, but it really doesn’t seem like much of a stretch at this point.

One week before the project’s release, the Wasteland crew made its first big step toward superhero status by donating $1,000 to Operation Breakthrough for the purpose of buying new headphones for students at the facility. Kye, Baston, and their third co-founder Jesse Brown stopped by to drop off the check with OBT CEO Mary Esselman and hang With Love. By Faith. banners in the facility’s walkway that bridges the east and west sides of Troost Avenue.

“It’s more of a message for Kansas City and the youth of Kansas City,” Baston says of the donation, the banners, and their goal of inspiring kids there. “The best place we could’ve started was a bridge that connects the poverty line on Troost. And every day, kids will get to walk through that bridge who don’t really got a lot of hope at the end of the day, and they’ll get to see that message. They might not ever even play the project… but they’ll know With Love. By Faith. You know, you see something enough times and it becomes part of your DNA.”

Kye’s always referenced Kansas City in his raps. One of his earliest singles, 2016’s “Get Right,” foreshadows this savior’s outlook he would later take on — “Killa City, home of young and the helpless / Like, ‘Kye, save the city,’ I don’t have a choice,” he rapped. On the artwork for With Love. By Faith., designed by longtime collaborator Kendu The Stampede, Kye’s face appears hovering over the downtown skyline. Songs like “Kansas City State Of Mind” and “Children Of The Ghetto” highlight some of the perils of life on the city’s Eastside through local news clips about drug and weapons raids and lyrics about a classmate who brought a gun to school.

“When I walk outside, I do see a wasteland,” Kye says in reference to the new label’s name, which he came up with. “But to me, it’s like gold. That’s something that I value so much. It is ugly, it is gritty, but I see the good in it all. And what we do here is a good representation of that.”

“I’ve been doing music here for about five years, and people just gravitated to it so much and put so much faith behind it…” Kye says about the uptick in focus he’s put on his home. “People have started to put their faith in me to be this hometown hero, so I feel like they’re really rooting for me, like I’m people’s voice. So I feel like I speak about Kansas City because they play a big role in whatever I do as an artist.”

The Wasteland team has been overseeing the rollout of With Love from their newly minted downtown office space, acquired three months ago, where they can hold meetings, create promotional material, and record new music. To continue the metaphor, you could call this the Batcave.

One of the most important things that separates Bruce Wayne from Batman and J’kye Slatton from Kye Colors is the coveted utility belt. Kye’s most apparent tools, upon talking to him and listening to his music, are his knack for storytelling and his quiet charisma, but there’s plenty more going on if you look closely enough.

Over the last five years, Kye has slowly begun to master two different elements of his on-mic persona. There’s Kye’s vulnerable side, which has been present, arguably, since his 2017 track “Good,” on which, over a sparse piano beat, he detailed his creative frustrations, lamented American political turmoil, and opened up to his sister about a suicide attempt. It was truly heavy stuff, especially for an artist only 16 at the time.

With Love’s opening track, “Broken Place,” begins with the sound of thunder, an emotive guitar line, and Kye rapping about being shown fake love and thinking critically about the people he surrounds himself with. Later, on “Only God Knows,” he’s open with his audience about his thoughts on God, life, death, and the events that separate the latter two. He’s not packing every single one of his worries into one depressive gut-punch like he did three years ago, but rather, Kye has matured in his writing and learned to give himself time to develop these ideas into their own, fuller songs.

The other element at play would be Kye’s toughness. While he’s always been confident in his abilities as a musician, only for the last year or so could you truly hear it in his voice. You can almost hear him glaring at you on tracks like “Talk About It” and “What I Look Like.” He’s been a bit more confident in his ability to pull the ladies, too—nearly a catchphrase at this point, “I’m a mack, I’m a player, I’m a pimp,” he asserts on “Come Back Home” and pre-album single “Doggy.”

One pimp influential to Kye, specifically in his production, is Mac Dre. The Bay Area brand of g-funk has been rubbing off on Kansas City for decades now, but another feat of Kye’s has been giving it his own spin through his choices in tone and the arrangements in which he uses the all-important synth bass. Though he considered beats from other local producers for With Love, he ended up with an entire project of songs he produced himself.

To top it all off, With Love sees Kye’s integration of R&B grooves more seamless than ever. Where some rappers lean on guest spots or make ill-fated attempts at singing themselves, Kye has been chipping away at this skill for a few years now. “It’s just a matter of how much I study music,” he says.

You’d figure a young artist with a new album and hopes of breaking onto the national stage would be upset about the pandemic, right? “Really, with this whole pandemic going and not being able to do shows, it hurt for a moment, but we just had to figure out how we were gonna get through this,” Kye says. Aside from performing a private show to roughly 50 friends and fans the weekend of the album’s release, Kye says that for now he’s been spending time working on more online content to keep folks satisfied.

And this is all despite Kye having contracted COVID himself after visiting family, making industry connections, and (yes) visiting Magic City on a trip to Georgia and Alabama back in June. “It felt like I just had a real bad flu, man. Like, I never felt that before. For a couple weeks I sat down, stayed out the way.”

Kye says that the combination of overcoming the virus and witnessing the bustling Atlanta hip-hop scene up close motivated him to work even harder leading up to the release of the project. “I didn’t really realize I had a reputation out there. Like, people knew me. And you know what they say, ‘It’s not about who you know, it’s about who know you.’ … And, like, I’m black, bro. So me seeing black people be successful like that, like, I could walk outside and see that … that’s not something I can see every day in Kansas City.”

So with a renewed sense of inspiration and motivation, Kye Colors, the Southside’s own caped crusader, flies onward. He seems to trust the process. With Love. By Faith. feels more apt a title than ever.

With Love. By Faith. is available now on all streaming platforms.