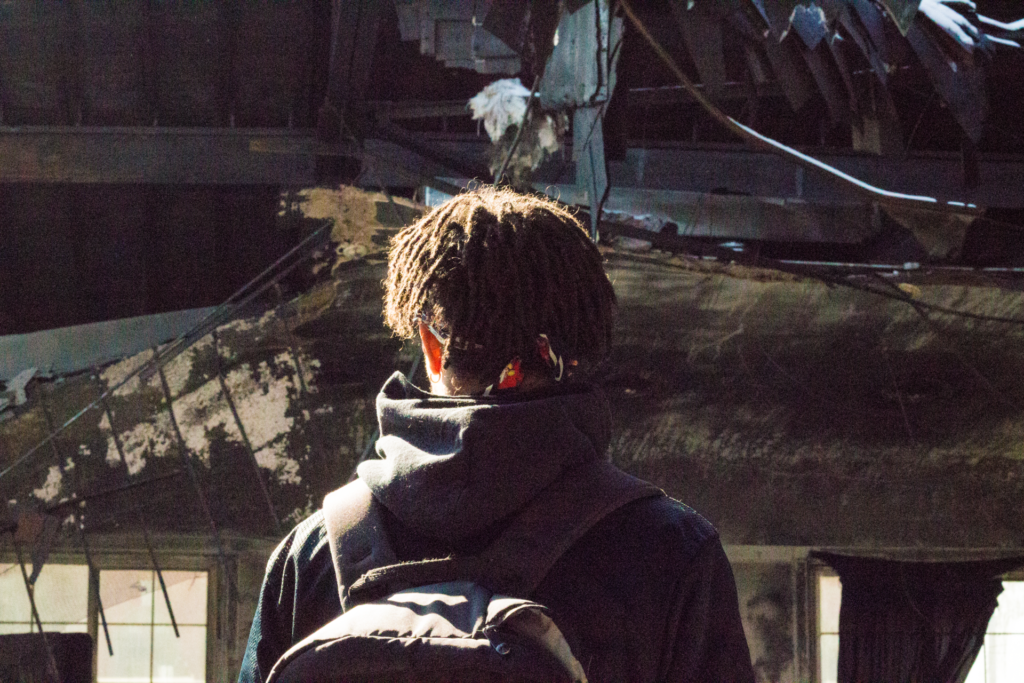 Up until about a year ago, Kendall Blakeney was a cable guy. He’d spent his early twenties doing the starving-artist thing — visual art, mostly — with little success. Then his girlfriend announced she was pregnant.

He knuckled down for a few years, devoting himself to his full-time gig and raising his new daughter.

“But then I realized, ‘Man, if I put half the amount of this energy [from working at the cable company] into myself, I feel like I could be a lot better off,’” Blakeney says. “It felt like I didn’t have enough to show for the work I did.”

Blakeney quit the gig and, since then, has kept busy making up for all the time he lost installing DVRs. He’s now directing videos for many of the biggest hip-hop names in town at the moment, including Aaron Alexander, Gee Watts, Kye Colors, and Stik Figa. But if you follow local rap, you probably know Blakeney by a different name: Kendu the Stampede. Kendu is a nickname Blakeney has had since childhood; “The Stampede” comes from watching a lot of anime as a kid.

“My dad was a big goofball, and anytime he’d walk by the room, he’d make fun of whatever I was watching,” Blakeney says. “One of the episodes I was watching was Trigun, and the character’s name is Vash the Stampede. Not too deep.”

Not too deep is also how Kendu describes his start as an artist. He learned how to edit photos via a YouTube tutorial, then started a photography business with a friend. They quickly found an unlikely revenue stream: cosplayers.

“A group on DeviantArt found me, and for the longest time, I was getting contacted by all these crazy people who dressed up super-weird,” Blakeney recalls with a certain amount of disbelief. “And I didn’t really understand it. I was around all of these crazy people, and I felt really out of place, but I was getting to shoot and getting paid for it.”

Blakeney directed his first music video in 2014, for the Dom Chronicles’ track, “Get Focused.” At the time, he was only taking photos, and his approach to video was based on that intuition.

“I feel like [the Dom video] not being the traditional form of a music video is why it might have stuck with people,” Blakeney says. “I just shot it how I thought a music video should be done.”

But for a video Blakeney describes as “pure experiment, for fun, me and some friends” and unconcerned with being perceived as art, “Get Focused” contains many of the hallmarks for which the director has come to be known. The colors are hyper-realistic, the focus is soft and dreamlike, and while there are plenty of shots of Dom rapping to the camera, there are just as many that could easily be candid images of the artist in a state of contemplation. Kye Colors’ “House Party,” which Blakeney directed more recently, is more like a time warp from an alternate version of 1990. You almost expect to see Kid ‘n’ Play doing the Funky Charleston in the background.

“I feel like, if I want to be taken seriously, I have to be pretty diverse and attack it from all angles,” Blakeney says.

That mindset extends beyond hip-hop videos. Blakeney divides his work into multiple disciplines and identities. There’s Kendu the Stampede, which encapsulates his videos as well as the painting and drawing he does. Then there’s HiiFreq, a production company that provides photos, videos, and social media management for companies like MADE Urban Apparel and Stranglehold Supply Co. Finally, there’s CaviART, which is, as Blakeney describes it, “a conglomerate of musicians who are all kind of doing their own thing, but their circle overlaps.”

The visual identity of CaviART resembles that of a film studio, complete with a logo evocative of bygone B-movie producers — not far off from the vibe in the Kye Colors video.

“I’m glad to see this wave of ‘80s and ‘90s aesthetic coming back, because that’s where I draw a lot of my inspiration from,” Blakeney says. “I’m glad we’re on this wave we’re on.”

He continues: “We all hang onto a little bit of nostalgia. A lot of my favorite things and the creatively inspiring things come from the ‘90s — comics, video games, anime — all of that stuff kept me out of trouble…I try to surround myself with all the things that I love, and most of the time, nostalgia is what I feel it stems from. I spent so many of my early years working that I didn’t get to have a lot of fun, so here I am: grown, working for myself, and feeling like I’m figuring life out again for the first time.”