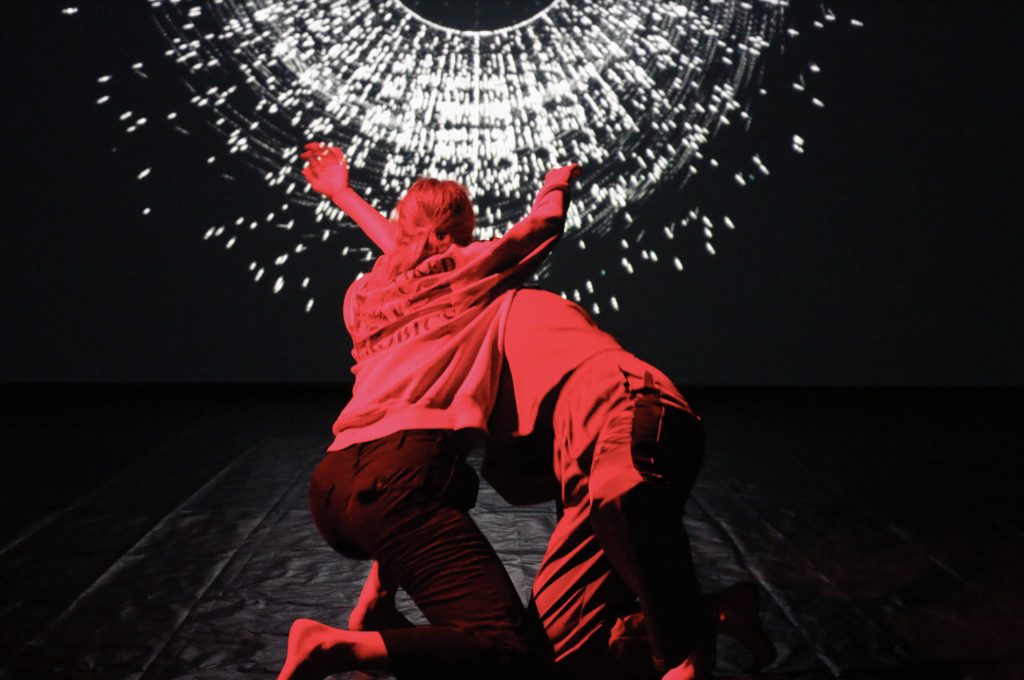 Sam Amey and Kimie Parker of Kostas Contemporary prepare for In All Forms. // Courtesy Charlotte Street Foundation by Hope-Lian Vinson

Kostas Contemporary could have been just another dance company, but instead, creator and choreographer Haley Kostas wanted to tap into something greater. This movement arts troop officially soft launched Thursday, May 19, with the first performance of its dark commentary on mental illness, In All Forms, at the Charlotte Street Foundation’s Stern Theater (3333 Wyoming Street).

Kostas co-produced the show with composer Conner Giles. Their mission was to lift the curtain on Kostas Contemporary with a tone-setter that would firmly land it as one of Kansas City’s most intense arthouse projects.

“We’re looking to see what things we can explore with movement and music,” Kostas says. “We’ve reframed that in a way to call it shape and sound.”

The company is lifting off, and it’s coming from humble beginnings. Right now, the company employs only two dancers, with the hopes of bringing on more.

“We wanted to start out intimately so that we can pay those dancers a living wage,” Kostas says. “And we have succeeded in that for this first performance, which is huge. Right now, it is this larger body of work that is demonstrated through this almost symbiotic relationship between these two dancers. I’m hoping, in the future, that we can have auditions, and even change the status quo of what an audition looks like.”

Kostas Contemporary wants to move expectations in the audition realm by bringing in adjudicators from other mediums. These perspectives would, ideally, see Kostas’ company cultivating an environment for skilled movement artists from a variety of different backgrounds.

In All Forms, meanwhile, aims to be an artistic performance that can be interpreted differently by any individual. For Kostas, every specific takeaway is just as valuable as the last.

“[In All Forms] highlights the elephant in the room and lets it out,” Kostas explains. “It is messy, and it exposes what it looks like to heal. Healing is messy, and it’s painful, and it’s ugly, and there are setbacks, and it’s exhausting. It’s never-ending. It’s practice.”

Giles explains that those interested in attending In All Forms—the world’s introduction to Kostas Contemporary—should not expect the standard musical or theater production.

“You shouldn’t come to this show expecting to hear songs. That won’t be happening.” Giles says when describing In All Forms‘ music. “It’s a cross between ambiance, drone, and otherworldly states, and maybe even some horror elements. Just the nature of the subject matter necessitates that there be substantial dark moments that are intended, from my point of view, to be therapy. It’s a ‘saying it out loud,’ sort of thing.”

He adds that these dark examinations are punctuated by more specific emotions, such as anger, confusion, despair—and reason for hope.

“[Hope] is in the music as well. There is a reason for trying,” Giles says. “That is, ultimately, what you hear in the music, literally at the end of the piece, but also, throughout feeling these strange places that the music and the choreography go into. It’s dark with purpose.”