Komatsu Ramen goes big but needs to get better 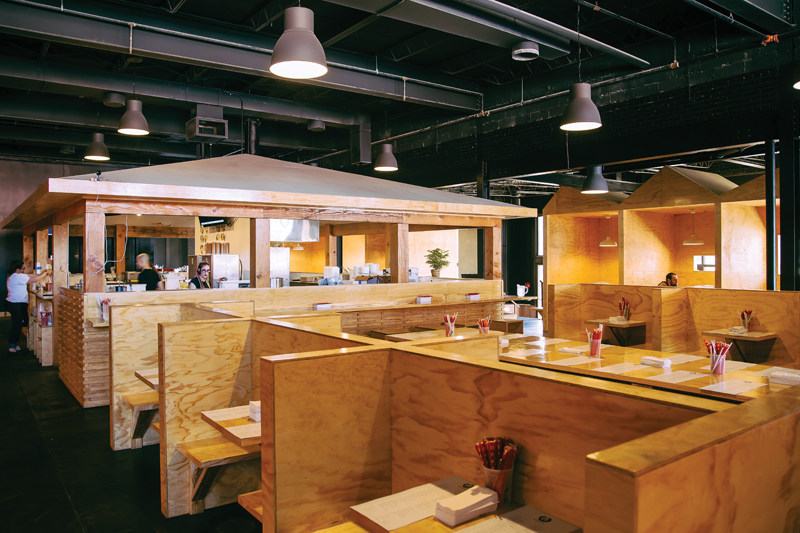 With the gold-toned radiata pine — such pine! — creeping under you in square-jawed stools, towering over you in slope-shouldered huts, eclipsing the sun from a wall of ersatz windows. With the canyon of a restaurant, 8,000 square feet of cool concrete and black paint and dead tree. With the vibe, simultaneously primal and alien.

Forget color, forget plant life, forget daylight. This is a place where ultramodernity circumnavigates itself in search of a creation myth: In the beginning, there was nothing. Nothing but a fuck ton of pine.

This is Komatsu Ramen, a vast desert planet with a pretty good concession stand.

Komatsu opened in midtown this past December on the crest of a ramen wave: Local shops Columbus Park Ramen and Shio Ramen have seduced slurpers for some time, and Bōru Ramen Shop launched in February, hot on Komatsu’s heels.

But Komatsu chef-owner Erik Borger had promised something different in the months before he opened his paean to timber: His place would be cheaper (with the bowls a flat $10, whereas KC’s market rate hovers between $12 and $14). It would be open later (until 1:30 a.m.) to cater to the last-call crowd. And it would be large enough to comfortably seat an ocean liner’s midnight-buffet line.

So Borger’s is less ramen shop, more ramen warehouse — which must have been the plan, given that 3951 Broadway is notoriously oversized. More than one previous tenant (most recently, Open Fire Wood Burning Pizza) disappeared into its yawning maw, never to be heard from again. Any endeavor scaled to a floorplan of this size requires volume of a kind that has stubbornly failed to materialize along this stretch. Still, Borger is banking on just that kind of traffic to make Komatsu stick. He estimates the space can fit 365 diners. “I think it’s the biggest ramen restaurant in the world,” he told me.

If that sounds like a nightmare for servers — high volume, low density — it is. On all three of my visits, the waitstaff wore the grim, resigned faces of people who’d been apologizing for hours.

“I’m so sorry,” our server said during one visit, leaving an appetizer (steamed brisket buns) on the table when we were halfway through our ramen. “I’m not sure what happened. We’re slammed tonight.”

I slid to the edge of our enormous pinewood pod and squinted at the horizon. I spotted only a half-dozen other faces in the dining room, but this far from land I couldn’t be certain.

Our server needn’t have bothered with the brisket. By the time the steamed buns arrived, their bottoms had seized into a jaw-popping, jerky-tough chew. “It’s kind of like a communion wafer,” a tablemate remarked, not unkindly. A daub of black-garlic crème fraiche provided a sharper flavor than your altar-issue host, but the brisket pieces were too stingy to add much else.

The buns erred more in execution than in design. In fact, the crispy tofu buns I ordered on a second visit were dewy and pliable, with the right balance of fillings (generous tabs of crisp-edged tofu; a smear of tangy, togarashi mayo; a crisp layer of spice-crusted cucumber slices). And while the other starters are simple — edamame, cucumber and seaweed salads — the portions are hearty and the flavors bright. A plate of edamame tossed with a seven-spice powder proved an ideal bar snack, with salt and spice to balance Komatsu’s sweet cocktails and fragrant sakes. 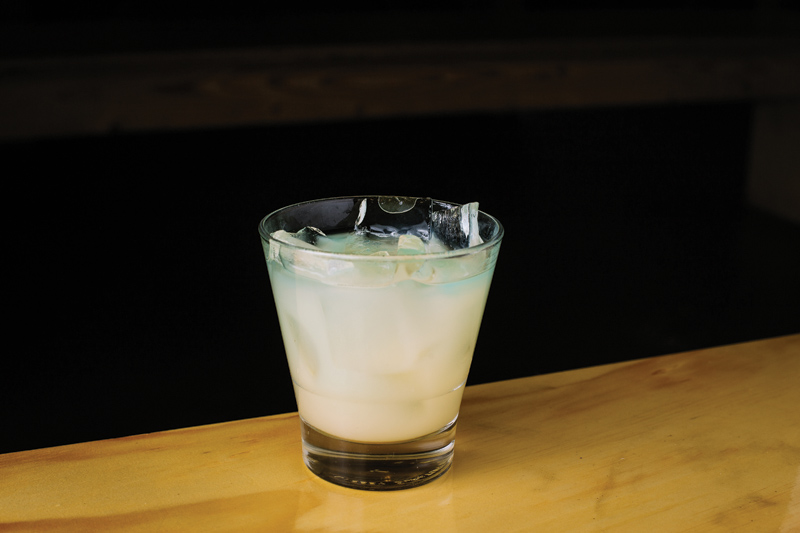 The extensive drink menu suits the space. There’s a sprawling list of sakes and wines, and a slate of cocktails and blended shots includes three flavors of chūhai — a mix of sparkling water and shōchū liquor that’s mild, refreshing and almost imperceptibly sweet. (Nondrinkers have multiple teas and Japanese sodas to choose from.)

Justus Drugstore rock star Arturo Vera-Felicie consulted on the cocktails, which skew sweet and citrusy. The White Lady is among the stiffest, though when I ordered it, the harsh blend of gin, Cointreau and lemon hadn’t been shaken long enough to blunt the booze. I preferred the Milky Way, a whiskey-based drink in clear-liquor clothing. Concentrated Calpico, a yogurt-y Japanese soft drink, brightened up the spirit, while simple syrup and lemon lent it a clean finish. A wisp of blue curacao spiraled cosmically through the glass, adding an air-kiss of cotton-candy sweetness.

Komatsu’s ramen menu is almost as large, with 26 bowls that vary mostly in their toppings. Excepting a vegetarian bowl and a vegan bowl,  they’re divided into three sections, based on their tare, or flavor base: tonkotsu (pork broth, served with a thin hakata noodle), shoyu (soy sauce, served with a curly tokyo noodle), and miso (fermented soybean paste, served with a chewy hokkaido noodle). Within each section, diners choose from one of eight combinations of meat, vegetables and seasonings. 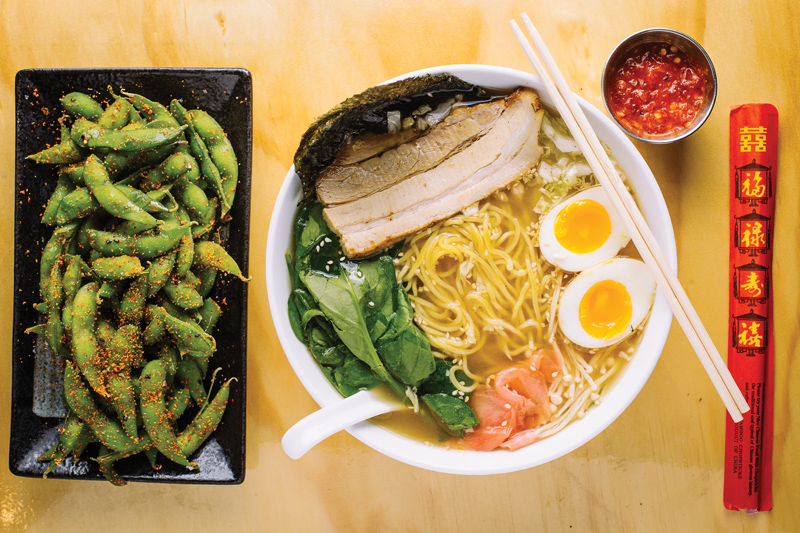 Borger won’t divulge the source of the meat, other than to say that it comes from a local smokehouse. Worth noting: Neither the meat nor the noodles nor any of the broths is cooked in-house. Borger will tell you that this is to make his dishes more authentic, not less. Though he initially planned to make his own noodles, an article by renowned ramen chef Ivan Orkin changed his mind. “It’s not possible to get the correct wheat in the United States,” Borger told me. The solution? Sun Noodle, a Japanese purveyor that supplies noodles to Orkin’s restaurants as well as to Momofuku, David Chang’s New York ramen mecca.

The tares for the broths are imported from Japan as well, though this seems a matter of sheer practicality. “We’ve done almost 50,000 bowls of ramen since we opened,” Borger told me in early March. At peak times, the restaurant may fill 100 bowls in an hour. That’s a lot of broth to prepare from scratch.

I couldn’t help but measure Komatsu’s bowls against those of hyper-local competitors — I’m team Shio for noodles, team Columbus Park for protein — but Borger’s passion for authenticity has borne fair fruit.

Ramen initiates, for instance, may find comfort in the Hakata, a tonkotsu bowl with Midwestern roots. Tabs of fatty smoked brisket swim with sweet corn, bean sprouts and bamboo shoots in a cloudy pork broth. The hakata noodles seemed the least forgiving: In both the Hakata and Yokohama bowls I tried, they were overly soft, with a spaghetti-ish texture. And the tonkotsu wasn’t as sticky as I’m accustomed to, despite its high-tech origins; Borger told me that his source uses a refractometer to verify the broth’s density. But I had no qualms about the flavor, which was rich and intensely meaty. The soft-boiled egg was another standout. In the Hakata and in every other bowl I ate, the yolk was cooked to a thick, honeylike consistency, the white tender and salty thanks to a soy-and-mirin marinade.

The miso broth was even richer. Borger chalks it up to Japan’s long-fermenting red miso; the top-shelf stuff can be tricky to come by in the United States. Here, the opaque white broth is full-bodied and complex, with a gentle funk from the fermented bean paste. The accompanying hokkaido noodles were my favorite of Komatsu’s three styles. The strands were thick and chewy, as comforting as a hug and resilient enough to withstand minutes in the hot broth (though ramen etiquette dictates a race to the bottom of the bowl).

Skip the Kama, a miso bowl with tiny poached shrimp and thin-sliced wheels of narutomaki, cured fish cakes with a groovy pink spiral. The fish cakes were pleasant and mild (if a bit gristly), but the shrimp were mealy and left a dirty aftertaste. The Oga, which swaps the seafood for broad slices of pork belly, is better.

Each day, Komatsu offers one lunch special for $8. On my daytime visit, that was the Susaki, a shoyu bowl trimmed with generous hunks of roasted chicken, hearty bean sprouts and wilting spinach leaves. My favorite accompaniments (besides that soft-boiled egg) were the raw enoki mushrooms, spindly little soldiers that slowly softened in the broth’s fragrant steam.

The curly Tokyo noodles were firmer than the Hakata, with a pleasing bite, and the dark broth — built on a tare of multiple soy sauces for extra umami — was suitably savory, with dueling notes of acid and caramel. Of the three broths on offer, the shoyu has the most curb appeal: On my visits, the broth was a bold mahogany, its surface flecked with confetti shimmers of emulsified fats.

At dinner, all bowls cost $10, though diners can “make it spicy” for a dollar extra. The house-made condiment is worth the investment: Komatsu blends chili paste, a proprietary 12-spice powder and a pungent leek oil into a silky, vibrant relish that adds harmonizing heat and tang to each bowl.

Design is both Komatsu’s calling card and its Achilles heel. Borger had a singular vision for the space, and that vision involved 23,000 pounds of pine. (The restaurant’s name means “small pine,” which seems inadequate. I suggest: “colossal pine,” “big-league pine” or “pine to mock the gods.” Send translations.)

Oh, but that main dining room. File under “good intentions gone wrong.” Every aspect of the build, from the blond booths with asymmetrical roofs to the cubbies cut at odd intervals into their walls, mirrors award-winning architect Ietsugu Ohara’s design for a branch of Shyo Ryu Ken, a famous Japanese ramen chain. That design makes sense for the Japanese shop, a modest room crouched under an Osakan overpass where diners can enjoy a semiprivate experience while still feeling connected to the bustling bar feet away. But it’s an odd fit for 3951 Broadway. Far from cultivating coherence, the wooden huts maroon diners on little islands miles from the nearest friendly face.

Better to eat in the bar area. Unlike the main dining room, the bar doesn’t block its wall of windows with a blanket of pine. The wood is still a strong presence — the bar, the shelves, the high-top tables, the square stools — but exposed walls and blessed daylight offer needed contrast. The space feels airy, sophisticated and social — enough so that you might be persuaded to stay for one more drink.

But don’t overtax your bladder. I am duty-bound to warn you about the bathrooms at Komatsu, which resemble the scene of a truck-stop murder. Icy-toned overhead fluorescents bathe you in queasy, institutional light, and the space mirrors the restaurant as a whole: oversized and underused. The functional portion of the ladies’ washroom is relegated to a backroom with two stalls and, on my second visit, two broken sinks. To reach it, I traversed an enormous, unfurnished square room with nothing on its mirrored walls but a missing-persons flier. The bathroom itself was the physical manifestation of horror-film infrasound. I checked corners for Saw-grade booby traps. I gazed into the streaked mirror and saw the abyss gaze back. I gave wide berth to a bucket that warned: “DO NOT MOVE.”

I returned to my seat in need of diazepam. I settled on dessert. The only desserts on Komatsu’s menu in March were a sake bomb and a selection of kakigori: shaved ice flavored with imported Japanese syrups in flavors such as lychee or wasabi and pear. For $6, a bowl of ice and syrup may be tough to swallow (though the yuzu flavor was refreshing and crisp). Still, if you don’t have work in the morning, you may as well go for the sake bomb — I can think of worse ways to end a meal than with a Schlitz tallboy.

Plus, you’re eating in the bar, right? Those window-facing bar seats are the best in the house. Even a desert planet needs a good cantina.

Best bet: Nibble some togarashi edamame with a Milky Way and save room for the Oga miso bowl. Skip dessert — unless a sake bomb speaks to your soul.