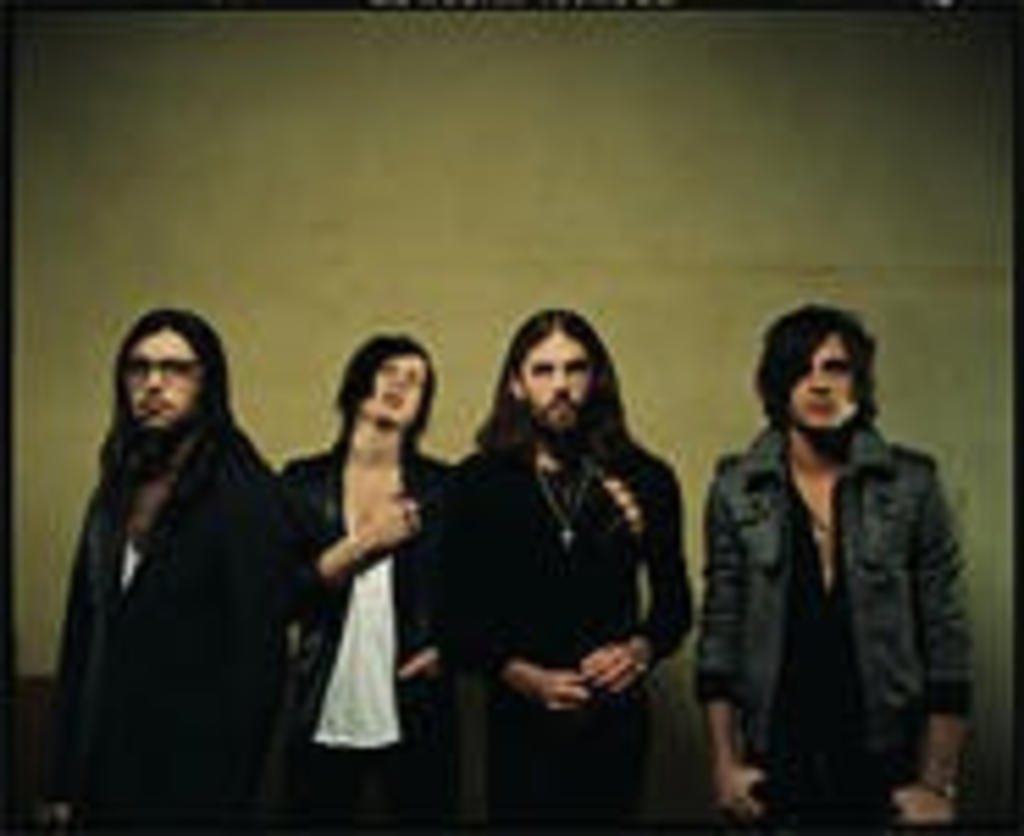 The several, several days and nights of waiting to hear from someone — anyone —with a Kings of Leon pedigree finally conclude with a nearly last-minute cell-phone hookup with Matthew Followill (cousin to Caleb, Jared and Nathan), guitarist and one-quarter of Kings of Leon.

“On Call” by Kings of Leon, from Because of the Times(RCA)

To celebrate, I ride the subway home listening to the Stones’ classic Exile on Main Street. Right now, post-long-awaited interview, on a New York City subway where thronged commuters have certainly learned to keep their conversations, if not their hands, to themselves, and where iPods are as de rigueur as pants, I’m rocking out to “Rocks Off” while, a quarter of a world away, Kings of Leon proceeds with its final UK set.

Maybe Exile is a cleanser for my aural palate. Perhaps I’ve overdosed from almost a week of daily cram sessions with the third and latest Kings album, Because of the Times. Or maybe I’ve just got Jagger on the brain.

Or blame the official Kings of Leon press kit, which is infested with the band’s brushes with greatness: photo shoots with Chrissie Hynde, an onstage jam with Eddie Vedder, opening stints for U2 and Bob Dylan. Then there’s Mick Jagger, who leaves his daughter behind after a casual backstage rock-and-roll royalty visitation.

Both the famous and the British — and the Stones frontman is undeniably both — love them some Kings of Leon.

A full 80 percent of sales of the band’s first two albums, Youth and Young Manhood and Aha Shake Heartbreak, occurred within British borders, and Because of the Times launched to No. 1 on the UK charts. There’s already talk of a show at Wembley, England’s live-music mother lode, when the boys return this summer.

“I hope America wises up and, you know, starts to like us or whatever,” Matthew says from somewhere inside the cavernous Carling Academy in Glasgow, Scotland. “But, I mean, it’s fine in America. It’s like, we play to, like, 1,500 kids, you know, and that’s pretty good. It’ll feel weird to come back and play for such a little crowd, and a crowd that might not care as much as a big crowd here, but as far as leaving here, I’m ready to get back to America, man.”

During its first week back in the States, the band’s profile will be high, with performances on The Tonight Show and the Coachella festival. But prior to this tour, Kings of Leon was likely best-known for a different kind of press-kit posturing.

As the story goes, the three Followill brothers spent their youth (and young manhood) traveling America’s highways and byways in their father’s charge as Leon Followill, a former itinerant and now defrocked Pentecostal preacher, spread the word of God. The fruits of rock and roll were strictly forbidden. (Cousin Matthew’s upbringing was just a little more normal.)

By now, however, Matthew and his cousins are sick to death of the reference.

And yet, the story gave the band a hook that helped attract a ready-made audience of Brits. Like the Stones and their Delta blues fixation, the British love all things Southern —what’s myopically seen as “the real thing.”

Despite one track, “Camaro,” named for the patron steed of the below-the-Mason-Dixon-line working class, Kings of Leon makes a move on Because of the Times to rub away the stamp of post-Pentecostal Southern-rock band. Whereas Exile was the result of a big band pulling back the reins into a claustrophobic chateau of sound, Because is expansive, spacious and ambitious, a long-limbed stretch for a band that has come late to the rock-and-roll game.

True, singer Caleb Followill’s frenzied yelps don’t match the beneficent, symbolic musings of, say, Bono. But the Kings’ instrumentation borrows heavily from the postpunk, arena-rock efforts of acts such as U2. Listen to the separated bass of “Charmer” (see: the Pixies) and the Edge-influenced guitar triplets of “Ragoo.”

“It’s bigger,” Matthew says. “We toured with a lot of bigger bands, and we played big stadiums and stuff like that, and we were writing songs, and we just really liked the way they sounded in those rooms.”

If the music doesn’t provide the be-all and end-all? If a writer feels compelled to mention Matthew’s cousins’ youthful travels with their fire-and-brimstone father through a South that’s all but forgotten? Well, the guitarist is smart enough or polite enough or Southern enough (they’re not mutually exclusive, you know) to bestow his secular blessing.