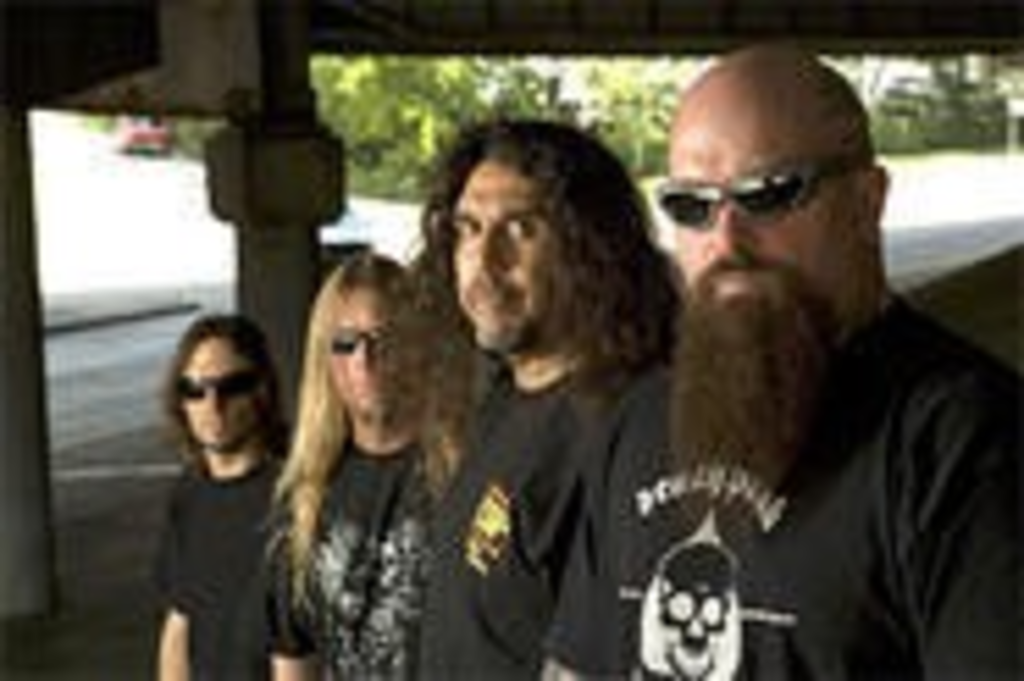 Headbangers could argue all day whether Slayer is the greatest heavy-metal band ever. And 25 years into the band’s career, a smaller number of musical authorities — not all of them metalhead Blabbermouth addicts — claim that the thrash king is one of the best rock bands ever. But here’s one undisputed superlative: No group’s fans are so ready to carve a band’s logo into their flesh.

The images are legendary: a picture of a bloody, angular “SLAYER” on an arm inside 1994’s Divine Intervention; on 1995’s Home Intrusion home video, an actual video of a fan slicing the word into his forearm, then cauterizing it with a propane torch; footage (check YouTube) of a lingerie-clad woman using her fingernails to rip the word into a longhair’s back. Slayer is not a band that evokes casual feelings in people.

Guitarist and songwriter Kerry King downplays occasional sanguinary props, but he’ll concede that if any band deserves it, it’s probably Slayer. He can’t think of a group that’s had a better run. The band has never besmirched its name with ballads and crossover bids. Since 1982, the Huntington Beach, California, heshers have played nothing but state-of-the-art thrash-metal.

After a decade away with his family and art brutes Fantomas, drummer Dave Lombardo — the only original member to leave — rejoined the unholy fold for the new Christ Illusion. The disc netted the band its second Grammy nomination, for “Eyes of the Insane,” Slayer’s latest look at the real-life nightmares soldiers face.

At 42, King looks harsher than ever, covered in barbed tribal tattoos from his fingers to the top of his shaved head, with “GOD HATES US ALL” inked into a meaty forearm. But he talks like a disarmingly regular guy who is equally disappointed in Metallica and the Oakland Raiders. If his band is still comparable to its peak form, King says it’s because he’s still in touch with his inner 18-year-old.

“I try to take all my experiences from growing up as a fan and apply them to Slayer,” King says. “I think that’s why our fans are so dedicated to us. Unfortunately, the first time I saw [Judas] Priest was on Point of Entry. I’d seen pictures of them all in leather, studded out. And that was the only tour in history where [singer Rob] Halford wore denim. And I hadn’t heard [Iron] Maiden before, and Maiden opened, and they kicked the shit out of ’em. And it’s always a dark thought in the back of my mind: I can’t let that happen.”