Kim and Kelley Deals’ symbiotic relationship is synthesized in the Breeders 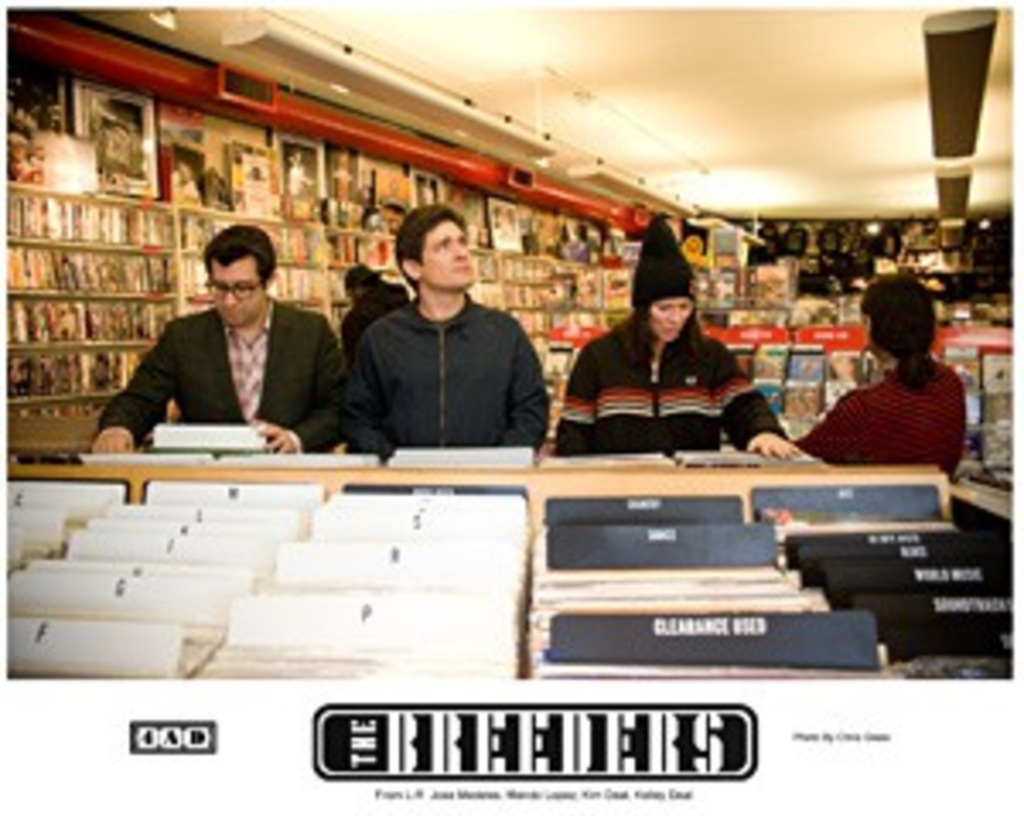 “German Studies” by the Breeders, from Mountain Battles (4AD):

The Breeders release albums so infrequently (this month’s Mountain Battles makes just four in the past 18 years) that guitarist Kelley Deal may be better known for playing caretaker to her twin sister, Pixies bassist and Breeders leader Kim, than for her musical abilities. This was particularly evident in loudQUIETloud, the stellar documentary of the Pixies’ 2004 reunion tour. See, Kim, who went through drug and alcohol rehab in 2002, agreed to the Pixies’ restoration on three conditions: no alcohol in the band’s dressing rooms, a separate SUV to travel in, and Kelley coming along for the ride.

Kelley says the three Pixies not named Deal “have no female in them at all,” so her role [in 2004] was simply “just hanging out, being a sister.”

“There is a symbiotic relationship,” Kelley says by phone from her hometown of Dayton, Ohio, “where I take care of her and she takes care of me. It depends on that day who needs taking care of.”

Perhaps because they are identical twins, the Deals are ever-present for each other. And though they’ve been through one rehab apiece (Kelley, older by 11 minutes, went first, following a 1995 heroin bust), Kelley insists that the rock-and-roll road offers no greater temptations than those found in Dayton.

“When I was doing the Kelley Deal 6000,” she says of her 1996, post-rehab band, “I had just gotten sober, so it was a pretty precarious feeling. This girl came up to me and she had a couple bags of powder heroin in her hand. I just turned away and fled. But you know what? I wasn’t tempted.

“However, let me tell you, when I go to civilians’ homes, and I open their medicine cabinet — because that’s what I do — I have taken Vicodin out of people’s medicine chests,” she adds. “In my parents’ house, in my brother’s house, in my friend’s house, in this stranger that I don’t know’s house. I find that way more precarious than being handed, like, a bag of smack at a concert.”

“That’s so depressing,” she says between chuckles. “When I talk about shit like that, it’s like, ‘What is wrong with me?'”

Yes, a conversation with one of the unabashed Deal sisters, like the music of the Breeders, is wild, wacky, waggish and more than a touch whimsical. Mountain Battles offers an especially idiosyncratic, intoxicating mix. Kelley sings a song in Spanish (though she doesn’t speak Spanish). Kim sings a song in German (though she doesn’t speak German). “Istanbul” follows phrasing apparently purloined from a schoolyard jump-rope session (Where ya going?/To the city/Where ya going?/To the city/Where ya going?/Istanbul!), and Battles begins with “Overglazed,” an infectious calling card in which the phrase I can feel it represents the lyric in its entirety.

But though Kelley actively assisted as adviser and advocate during the writing of Battles — some of which continued through the Pixies’ reunion she chaperoned — she receives no songwriting credits.

“A lot of times, just because it’s not on the album itself,” Kelley says, laughing, “doesn’t mean that I won’t be getting any royalties from it.

Does that mean that the Breeders are, in fact, her sister’s band?

“No,” Kelley says. “It’s Kim’s and my band, but I let her think it’s her band. And she probably lets me think it’s our band. It’s a total mindfuck.”