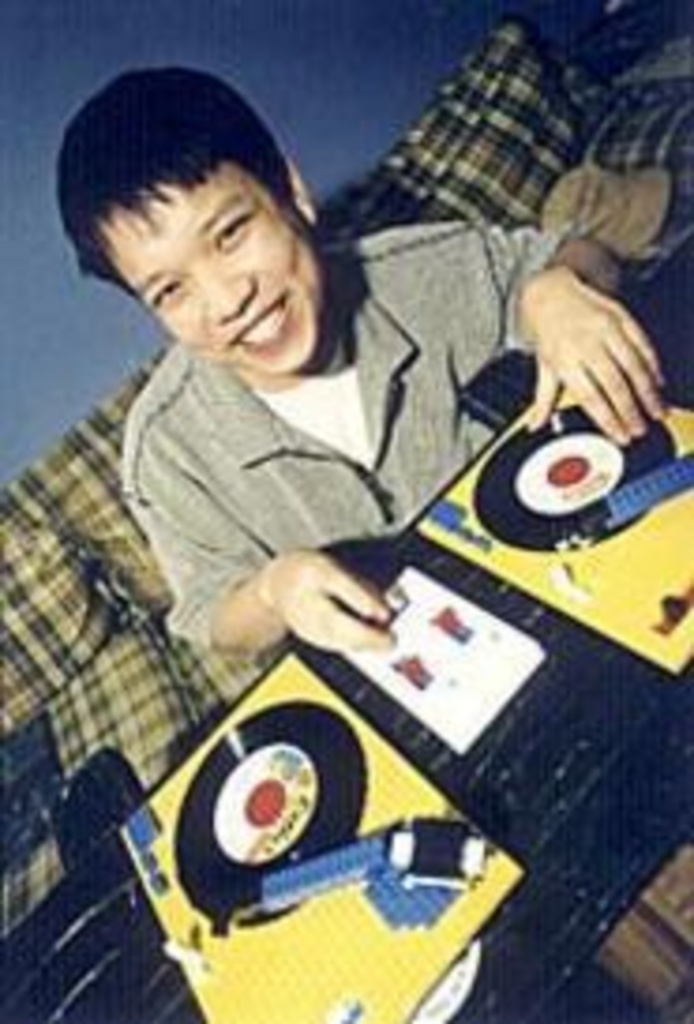 “Walter Cronkite made me what I am today,” laughs Eric San from his hotel room in Montpelier, France. “I began manipulating this old Time/Life floppy record called The Swing Era with his narration on it when I was, like, 12. My sister had this old-fashioned console, a combination record player and radio that I’d been playing around with. Instead of a mixer, I flipped the switch back and forth from Walter to the AM radio tuned to empty space. It was primitive, but I was fascinated by the sounds, especially his voice being cut and sliced. So I guess he can be given some credit for my chosen musical profession. As far as spoken word is concerned, Walter Cronkite is the king of the world.”

If San’s childlike enthusiasm for the once and future king of televised journalism seems a bit youthful, it is. For San is a kid. Actually he’s the kid, Kid Koala, master manipulator of fantastic plastic, a vinyl violator, a turntablist extraordinare.

San achieved his noble mantle with his formidable first release in 1995, an independent, sample-heavy masterpiece, Scratchcratchratchatch. It was a 30-minute platter of spoken-word hijinks with a beat. It was also a big-league calling card that immediately elevated him into the high fashion world of turntable wizardry, ultimately putting him on the same playing field as lifetime legends Grandmaster Flash, Cash Money, Jam Master Jay, and leaders of the new school Mixmaster Mike, DJ Q-Bert, and his idol, fellow labelmate Coldcut.

” I started out spinning at parties and clubs just to make money in college,” says San. “I had no idea where I was going or what I was doing, but some of my work fell into the hands of the guys at Ninja Tune Records, and the next thing I knew, I was a recording artist with a record out. I still don’t know if I’m doing anything properly. I sit at home in my bedroom crafting these weird little skits and beats, stuff that makes me smile. I’m just fascinated with the sounds I can create when I splice records together. In fact, it would be safe to say I’m obsessed with it.”

His obsession has taken Kid Koala worldwide, hence his residency in France at the moment. Turntablism has blown up internationally, and Kid Koala is criss-crossing the globe, spinning, cutting, and scratching his fingers to the bone just to bring them his latest visions, even if he is uncertain if they’ll want it.

“It’s hard to believe that my music translates to anybody English-speaking, let alone people who speak French or German or Dutch,” marvels San. “But I guess I shouldn’t be all that surprised. Hip-hop and techno are super-large everywhere, and my music sort of falls into some of those cracks. It’s been very encouraging to say the least.”

Even with all the encouragement, it’s taken an exceptionally long time for Kid Koala to complete his debut album — three years to be exact. He did put out an incredibly dense and much treasured EP called Scratchhappyland in 1997, but it too was sort of a stalling measure until he could come up with the ideas for a full-length. But earlier this spring, Koala released Carpal Tunnel Syndrome, a semiconscious concept album weighing in at only a few minutes longer than his first and second EPs.

“My music is sort of like watching The Simpsons or Monty Python,” muses San. “You know how when you’re with your friends and all of you just start throwing out all the greatest quotes from those great shows? Like the ‘Dead Parrot’ sketch or some random Ralph Wiggum quote? That’s sort of what I do with records. I obsessively catalog all these different sounds just so I can throw them back out to my friends at that right moment.”

Koala isn’t exactly proud of his hyper-acute attention to details, but he has used his mania to help shape the concept of the full-length album. He’s also laughed at his own compulsiveness.

“This obsession has changed the way I look at the world now. I honestly go around cataloging sounds and ideas constantly. I keep really organized notes on every record I buy, just in case I’m looking for a certain sound to complete musical ideas. That’s partially what Carpal Tunnel Syndrome celebrates: that nerdy, self-imposed isolation, that fixation with sound that a lot of people like me are dealing with when we make music. It’s really sick the way I pick things apart now. I do it constantly. I can’t stop. I really need to get a life.”

That life may be found on the road, as Kid Koala begins the North American leg of touring with fellow Ninja Tune labelmate Amon Tobin. The tour also hooks up San with Bullfrog, his own backing band from back home in Montreal.

“I started playing with Bullfrog back in 1992 or 1993, about the same time I started making a name for myself solo as a turntablist,” remembers San. “We recently counted it up, and we’re now just reaching about a thousand gigs together. What I do with them and what I do in my solo sets are completely different. So when you come to see us, you’ll get two separate, completely different shows. I included them on Carpal Tunnel Syndrome however, so maybe those two are slowly blending together. I just happen to be a part of both, so I like doing both together when I’m out on the road.”

Going out on the road also gives San the opportunity to peruse the country’s vinyl stores. He’s convinced that he needs a constant fix of recorded sounds to continue to grow artistically. He’s also worried, with good reason, that he may need to replace all his record collection in a moment’s notice.

The day after he concluded this interview (April 26), San boarded a train from Montpelier bound for Nimes. His box of records (essentially his instruments) didn’t make the journey, having been stolen en route. Luckily, he later recovered them, but the threat of having to hastily compile a new collection remains real.

“I can consistently be found inching my way through used vinyl collections wherever I am,” he says. “It’s my art. It’s what I do. I need records like a junkie needs drugs. You’d better believe that the day before my show, in any town I visit while on tour, you’ll be able to see me digging through the stacks, probably with a big stupid grin on my face and a bit of drool trailing down my chin.”


Thursday, May 11at The Bottleneck