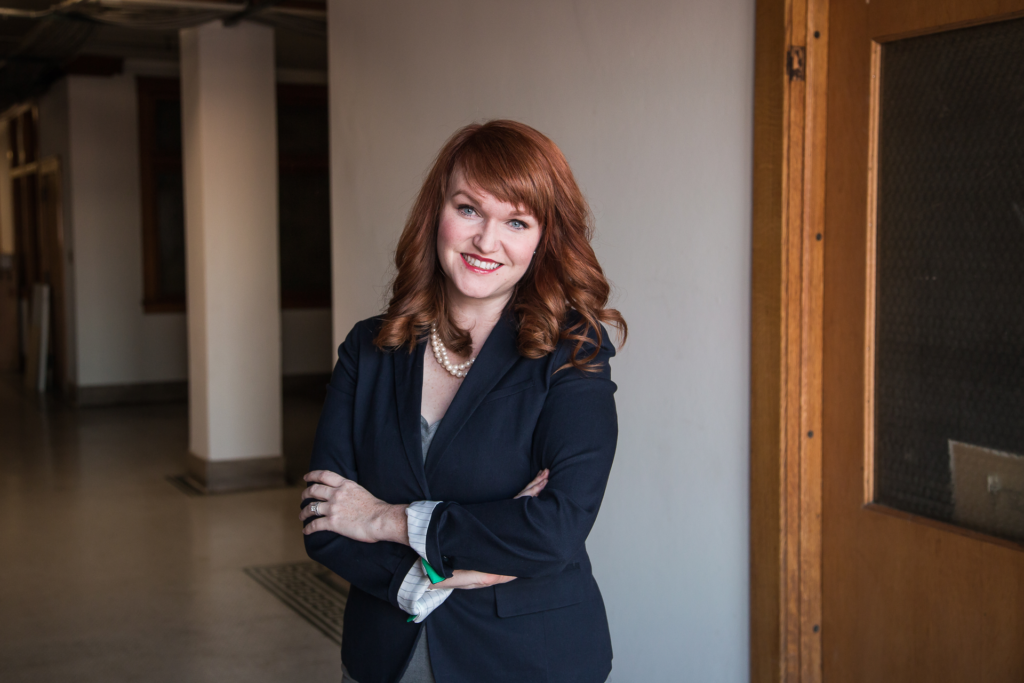 For Lee’s Summit’s Keri Ingle, as for many other recent political newcomers, the election of Donald Trump to the White House served as a galvanizing force. But when she decided to seek a Missouri House seat, she had given birth to her second child just weeks before. For someone who had spent her career to that point advocating for children, women and marginalized families, the combination of the two events signaled that it was time to try making a difference from a higher level.

The District 35 house seat primary election is in August, and the general election isn’t until November 2018, but Ingle is getting an early start. We caught up with her recently at a  coffee shop near Longview Lake to ask about her campaign.

The Pitch: You’re new to the political scene, right? Why are you running for the Missouri State House of Representatives?

I am completely new to the scene. I have never really been politically involved, except for being a constant voter and a Facebook activist, more or less, over the years. Last year’s election was a huge wake-up call for me. I’m a social worker, so a huge part of my career is advocating for vulnerable populations, for people who might not have that voice for themselves. I felt that I was called to do this. I had never been interested in politics or running for office.

I think for a long time I had an idea, and other people had an idea, of what politicians maybe looked like and their background, and I think that might be part of the problem in that we don’t have diverse representation and all the populations aren’t being adequately represented and their needs aren’t addressed.

Was there a moment when you said, “OK, that’s it — I am running for office”?

It was definitely post-election, and afterward I had just had my daughter. She was two months at the time. I was on maternity leave and had enough time to think. I felt like I needed to do something. As a social worker, I constantly come across laws and regulations that negatively affect my ability to help people and help the clients that I am working with. And sometimes I feel that there is a misguided attempt at helping people through legislation because they [lawmakers] have a lack of understanding. That’s not to say that I’m an expert on all populations, but I have a vast experience in Jackson County over the last 10 years. I’ve worked in child welfare, in foster care, and with children and families in poverty, domestic abuse and neglect.

Your work in the children’s division influenced you, and you spoke about how elected officials were drafting policies and decisions might have hindered some of what you were trying to do.

I now work in a hospital system, and part of my job is to help people access prescription medications — which can be pricy, especially on a fixed income. I see the regulations that negatively affect my ability to help them, the stopping of the MORx [state funding that helped Medicare patients with prescription drug costs]. I also help patients who need different help, like nursing facilities, and if you look at the cutting of money for in-home care and the cutting of funds for nursing homes, we are seeing a direct effect of that. We are going to see more effects of that. These are the populations that need the most support, and we are seeing them on the chopping block.

You helped campaign for Hillary Shields, also from Lee’s Summit, who lost a race in the state senate in November. Did you know her before the campaign?

I knew her through some community organizations, through Indivisible KC, and we had developed a friendship. And then, when she decided to run, I encouraged her. I believe in her and believe in her passion and feel that she does have the ability to effect change.

What is going on in Lee’s Summit with the grassroots campaigns, like Shields’ and now yours, that are challenging strongholds and long-held or unopposed Republican seats?

Lee’s Summit is becoming more diverse, and I think that is great — the diversity is only going to enrich the community. For a long time, politicians had to look a certain way and have a certain background and be a certain age. I think, once that reality changes, it opens the door for a lot of people to step up and say, I want to do this.

If you were elected, where would you focus your time? Health care? Child welfare?

I did a practicum for my master’s at Truman Behavioral and at their in-patient psychiatric hospital. It is often a triage for people who were intoxicated, who were homeless, and although the Kansas City area is rich with resources for mental illness and addiction, that’s not what our rural communities are experiencing. We have a lot of comprehensive resources that they don’t have in rural communities. So when we talk about the opioid epidemic, it is pivotal that those people have access to mental health care and recognize that we are dealing with a dual diagnosis and we need both. We need to have access to services there [across the state].

Your biographical background says that you grew up in a military family.

Both of my grandfathers fought in World War II, and I grew up against the background of that legacy of that. One of my grandfathers was a POW, and the other fought in the Battle of the Bulge. It was a huge source of pride in my family. My dad was in the Army National Guard and later joined the Air Force and was later stationed in Germany during the Gulf War. We lived in Germany for three years, and I went to a military elementary school. My mom worked as a nurse at an army hospital. Growing up on an Air Force base and stopping to salute the flag when the national anthem played, and growing up with children from all over the world, definitely gave me a sense of history there. We lived in a village outside the Air Force base, and there were ruins from World War II in our neighborhood and we would go on field trips to castles, some of which had been bombed during World War II. I visited the Anne Frank house as a child and went to the concentration camps, so my knowledge was shaped early and the value of public service and and service to others. I don’t think I ever had a choice. I think I was destined to be a social worker.

Do you know when you actually wanted to be a social worker?

I actually wanted to go to law school. My thought going into law school was I was trying to find a way to help others and I knew that was a position of power where I could help. When I started working at the children’s division, I saw that this is another way to help people and perhaps more directly. So I switched from law school to graduate work in social work.

Let’s talk about gender in Missouri. The state doesn’t have many female lawmakers or representatives. With all these sexual harassment scandals coming to light, including in the Missouri legislature, how can you change the environment? What needs to be done?

It is pervasive in our culture, in every part of our culture, and we are definitely in a reckoning where women are starting to feel open enough to come forward and tell their stories. I think we need to change the dynamics and the number of women [in the legislature], but I don’t think that is enough. It is just so basic to treat people with respect and dignity and it doesn’t seem like it should have to be explained but obviously it does. I think there should be consequences for people who make other people feel unsafe regardless of what they do that but especially when other people are using their power over others.

Education is key and education is power and there are people who didn’t know it was inappropriate. So sexual harassment training is a very good idea. It is a jumping-off point, but that isn’t the only thing that should be done to solve everything. But at least then we can say, “Yes, you do know that that is inappropriate because you have been trained.”

What are your friends and family saying about you running for office? Were they surprised?

I have a very full life and have supportive friends and family. They were not surprised. I remember my mom saying, “Yes, finally.” She actually moved from Oklahoma to here after I decided to run. She is really excited. I was sixth-grade class president and I always wanted to hold offices in clubs and organizations. I remember wanting to be president [of the United States] and writing papers on it.