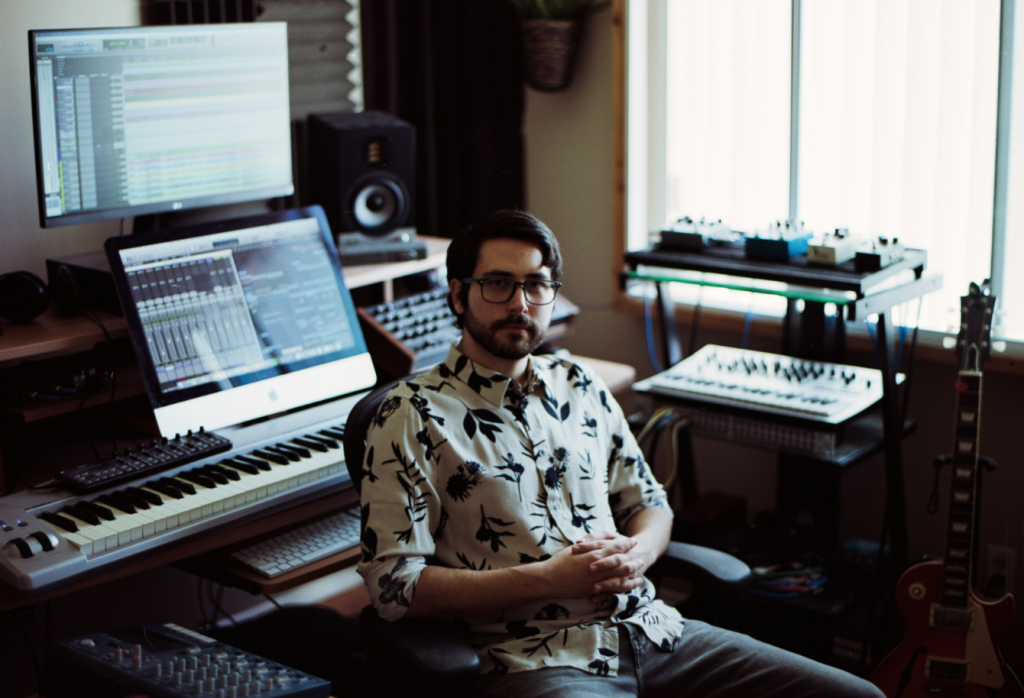 At its Sundance Film Festival premiere earlier this year, Lyle Mitchell Corbine Jr.’s drama Wild Indian, out this Friday, earned praise for its masterful use of tension and distinct artistic perspective. The film tells the story of Makwa, a troubled Anishnabe boy who commits an act of violence that sets him on a tumultuous path, and permanently traumatizes his best friend, Ted-O, the only other witness. As an adult, Makwa (Rutherford Falls and Blood Quantum’s Michael Greyeyes) is a successful professional and chilly family man. His barely-repressed sociopathic tendencies cause problems when Ted-O, recently released from jail, confronts him about the truth of their shared past.

Part of Wild Indian’s effectiveness comes from its impressive orchestral score, which lends the independent film a lush, big-budget feel. The film’s music is the work of KC metro native and UMKC alumnus Gavin Brivik, who previously scored the 2018 cult hit Cam, the Netflix series Living Undocumented and the Oscar-nominated short My Nephew Emmett. We talked about his experience recording the Wild Indian score with a remote orchestra, his growing experience as a film composer, and the difficulties of not getting pigeonholed as an artist.

You worked from a script to create the music for Wild Indian, rather than working with existing footage. How common is that? What unique challenges does that present to you if you don’t have some kind of visual representation to write to?

I would say that the challenges that arise from that are you really just don’t know how the actors are going to interpret the text, and it’s hard because, I guess when you read a novel, for example, you’re the one directing the film in your head, you’re the the one interpreting the text and visualizing the scenery. It’s not always so clear with scripts.

I initially wrote a lot of music from the script, but a lot of it changed once I saw the actual film. A lot of that was the edit and the actors. That’s usually the case with a lot of films, but it was a good learning experience. It’s easier when you’ve worked with a director and know their voice a lot more. You get a better sense of what will work. This was our first collaboration, so it wasn’t the smoothest process, but it got us to figure out what worked in the long run because we figured out what didn’t work.

How did the movie’s score evolve from that first pass to what eventually ended up in the film?

Initially the music was more electronic. There weren’t many orchestral elements, not very many strings. For the final score we ended up doing the opposite, where it was very melodic and we did a remote recording session with an orchestra in Bulgaria. It evolved quite a lot in the long run.

Lyle Mitchell Corbine Jr., the director, initially wanted to come out to L.A. and work in a studio close to mine. We had a dream plan of being 15 minutes from each other, and it would’ve been great if we could’ve been in the same room, composed music together and edited together. Because of COVID we had to do all the post-production remotely. We took a five month break, and that’s when I re-wrote the music.

Recording in LA and New York even without a pandemic is expensive, and there are complicated union rules to follow. I couldn’t afford union performers in New York or LA. My friend is the main assistant on The Crown, and told me they’d recorded the music in Bulgaria for years. He sent me raw orchestra recordings, and it was insanely good. He connected me to them. It was tough because you have a translator. You’re recording through Skype. You get a link to listen, and you have to type your feedback to the translator, who tells the conductor, who tells the orchestra.

What did that experience teach you?

There’s definitely a style difference between Hollywood and European string musicians. It’s subtle, but I think it benefitted Wild Indian. If I recorded in LA, it might have had a more Hollywood sound, which I know is kind of an abstract description. There’s a cleanness to the playing that exists in LA, like a traditional sense for how movie scores are played. I think we got a specific sound in Bulgaria. It sounds more like traditional classical music.

There’s also how the musicians work together, like an organism. For Wild Indian, we did sections where it’s just a string quartet, which is very exposed. If someone’s not on their A game, you hear it immediately. These people were always on their A game. Just beyond it. They added a lot to the music as well, their own expressive style to some of the notes. There’s a lot left to interpretation in sheet music. Not all of it is there. Sometimes you learn what you want when it’s played, like less vibrato, more vibrato. It was interesting to hear their interpretation of what I wrote.

You mentioned the initial score was more electronic-based, which is closer to what you’ve done on movies like Cam.

We tried something darker and more ambient originally, but the problem is that there are a lot of aspects of Makwa’s character that are hard to like, and we needed to find a way to build empathy for him. It’s easy to villainize a character like that, so we went a little more emotional.

How do you communicate a character’s arc musically? How much do you want those musical choices to influence the scene?

I think a lot of that is a conversation with the director. Usually I completely defer to the director for that. In a lot of cases I definitely want the music to evolve. It’s important for the music and character to move together, especially in a piece where it is heavily character driven.

With a piece like this, I definitely want people to notice there’s an evolution, and the way we did that in this film was to add elements that made the music a tad bit darker and more suspenseful in the second half. The first half is more melodic and emotional, and that was to help the audience feel for Makwa’s upbringing and the foundation that sets up the events of the film. To try and find a way to not just completely dislike him.

How do you identify a film’s possible emotional or social or psychological themes when you’re reading a script, before it’s been shot, and then write music to those specific themes? It feels like that almost requires a kind of synesthesia.

Yeah, there definitely is. I’ll read the script, in this case, and identify central themes. For me, a lot of this one was based around trauma, and its ripple effects. The film starts with indigenous people who are dying off from smallpox, and you see how that legacy impacts Makwa’s home life growing up. A lot of the commentary I’ve read from Lyle is how traumatic events pass down generation to generation. That was a huge part of our conversation in the beginning, especially with the opening of the film, where that was kind of the point.

With an abstract theme like that, it’s hard to be clear about what we’re going to do musically. I think a melodic theme works because you can distort it or rework it. You could use fragments of the melody that represent the initial trauma and play with it to see how it evolves. It might be less clear or dissonant or spacious or has more echoes, but the melody is still the same, so it has kind of an echo of the past.

I think that’s always the toughest to answer in words. Part of its identity is the way the strings are written, or some of the sounds we use. In this case there’s kind of a fragment of a melody that’s repeated. I think that helps give the film its voice.

I do think there’s a way that the music sounds in Wild Indian that I wouldn’t want to repeat again. I try not to repeat myself so that each film does feel like its own thing. My future scores with Lyle probably will utilize an orchestra, while my work with the filmmakers of Cam might be more electronic and synth heavy. The filmmakers have their own voice, and that guides me and helps me develop a voice that meshes together.

Some composers sound the same in every movie, and sometimes you’re really surprised by the difference. I love David Lowery’s films. I just watched The Green Knight. The composer of that, Daniel Hart, did a medieval score, but his previous score for Lowery, The Old Man and the Gun, was a jazz-based score.

I think composers sometimes don’t get challenged enough to get out of their comfort zone. I got to do that for Wild Indian. The first score I did was really in my wheelhouse, but the second version was challenging because I didn’t want to sound too Hollywood. We wanted it to have a nice balance between indie and Hollywood.

Is typecasting a thing that can happen to composers? How do you combat that?

Oh, most definitely. Look at a composer’s career like Theodore Shapiro. He does every comedy you can think of. Just go on IMDB, it’s all the Will Farrell movies. He did Tropic Thunder, he works with Ben Stiller. He’s the comedy guy. He also has these incredible dramatic and experimental scores, but he only does one every 10 years because people don’t think of him in that way.

Composers can get lumped into genre. Some composers end up having to turn down some gigs and work less to get out of that. Maybe a composer does a huge horror movie, and probably gets 20 offers for all these great scary movies, but they soon realize that will become all they get, and they’ll be so busy they have to turn down other stuff if they say yes to that.

I was a little nervous about that after working on Cam, and I have been offered a lot of stuff like that, because a lot of your connections from a movie like that are informed by producers and directors who continue working on similar movies. Part of your typecasting comes from just who you know. The way to get out of that is to hopefully know more people who work in broad genres, or you have friends in other areas.

Wild Indian was great in that it was different from what I’ve done. My dream is to work on bigger budget Hollywood movies, and I think Wild Indian demonstrates my skill for that over an avant-garde score like Cam.