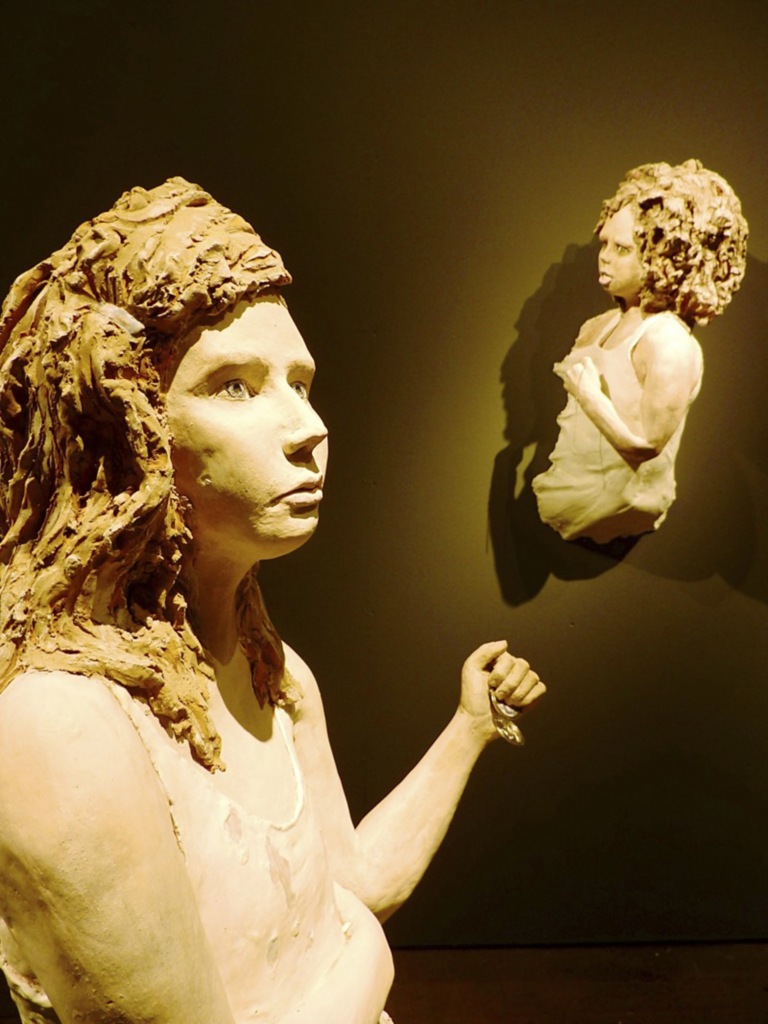 One theory about the universe posits that space-time is holographic. A holographic universe is scientifically interesting because it suggests answers to a bunch of annoying unresolved mysteries regarding the physics of black holes and the laws of thermodynamics. The research outfit Fermilab intends to test the theory by building a holographic interferometer to see if the universe becomes blurry at a quantum level, the way a digital photo, when magnified, resolves into a bunch of pixels.

Whether the theory holds or unravels, we’re stuck dealing with three pretty straightforward Euclidean dimensions, plus a slippery fourth that we’ll just let Marty McFly deal with because we can’t do anything about it. Meanwhile, the Kansas City Art Institute celebrates its 125th anniversary — and three-dimensional space — at the Belger Arts Center with KCAI in 3D, an exhibit of dimensional works by alums of that venerable institution.

Dig the materiality: Julie Malen’s clay sculptures are representational and well observed, but the real joy in her work — besides its manifest humor — lies in the undulant topology and crisp textural detail with which she evokes her subjects. DO NOT TOUCH. (You’ll want to.) Her “Bull in a China Shop” haplessly guards the exhibit entrance, a free-standing wall on which she has mounted an earth-colored sculpture of a bull’s head. Walk around the wall to find the bull’s body — as if its head were sticking through — sitting on a fine oak table, a set of elegant dishes smashed into shards under its hooves and bovine ass. That the dishes bear Iraq’s national symbols makes the work a bitter political joke executed with the arch self-awareness of a cocktail-party ironist who knows that it’s better to be funny than angry in certain situations.

“Bull in a China Shop” was presaged by Malen’s “Knock Knock,” a similarly free-standing wooden door whose twin lion’s-head door knockers have corresponding bodies on the work’s opposite side, clinging by their claws to the door’s panels. It would be a forgettable piece of visual cleverness if not for the craftsmanship. The artist’s obvious pleasure in the tactility of wet clay and her skill at evoking such sensuous forms put the piece over.

Terry Karson’s “Ruin” consists of three tall monoliths (equiangular polygons, to be dimensionally specific), two standing and one on its side. Their faces are uniform grids made of cardboard logos cropped from consumer packaging — Miller High Life, Minute Maid Lemonade, Frosted Flakes, Cheerios, A&W Root Beer, and hundreds of others — all visible through a careful patina of sanded distressing. As a statement about the transience and ephemerality of the marketplace, it’s maybe a smidge easy. But the act of curating, cropping and distressing all of those hundreds of packages — not to mention the Hoarders-like display of refuse accumulation — speaks to an impressively determined hyperfocus.

Textile artist Tracy Krumm has produced a series of dimensional works by crocheting wire of various metals — copper, nickel, steel, brass — and incorporating silk and found objects. The use of metals allows the pieces to hold their structure, which would have been nearly impossible had they been executed as actual fiber works. “Shield (Dickey)” spreads like a Navajo rug hung on a wall, its edges furled and bent, suspended in time.

Lora Campbell’s “Mine and Yours (but really it’s mine)” consists of two ceramic sculptures of young girls — one a full-body standing figure, the other a three-quarters torso sticking out of the gallery wall. The bodily complete sister holds a beautiful silver locket. Her abbreviated sibling holds a scant length of chain from which the locket once hung. The glistening tears in the locket-deprived sister’s eyes were, according to Belger gallery assistant Mo Dickens, a serendipitous accident of the kiln, a detail that the artist never intended. Campbell produced the work while still studying at KCAI, and its implied narrative and inherent cuteness lend an ingenuously youthful but clear voice to sibling rivalry.

Smith’s “The Birthing Process” is another self-portrait, this one submerging the figure to the shoulders in a full-sized oil barrel filled with motor oil. The black drips of petroleum on the work’s pedestal attest to the skepticism of gallery patrons with regard to the authenticity of the oil inside the barrel — like the bust, the piece is expertly crafted from ceramic material and is so well-executed that it’s easily mistaken for the real thing.

If Fermilab’s experiment determines that matter is, in fact, organized holographically, a lot of people may arrive at the mistaken idea that our experience of the world is illusory. Could we be living in a hologram? No, Neo. We can walk around and view the world from every angle. It’s as blunt and physical as a ceramic bull. And if you don’t believe a sculpture’s title card listing “used motor oil” among the deployed media, you can stick your finger in it and find out for yourself. As a matter of fact, there’s a spoon.