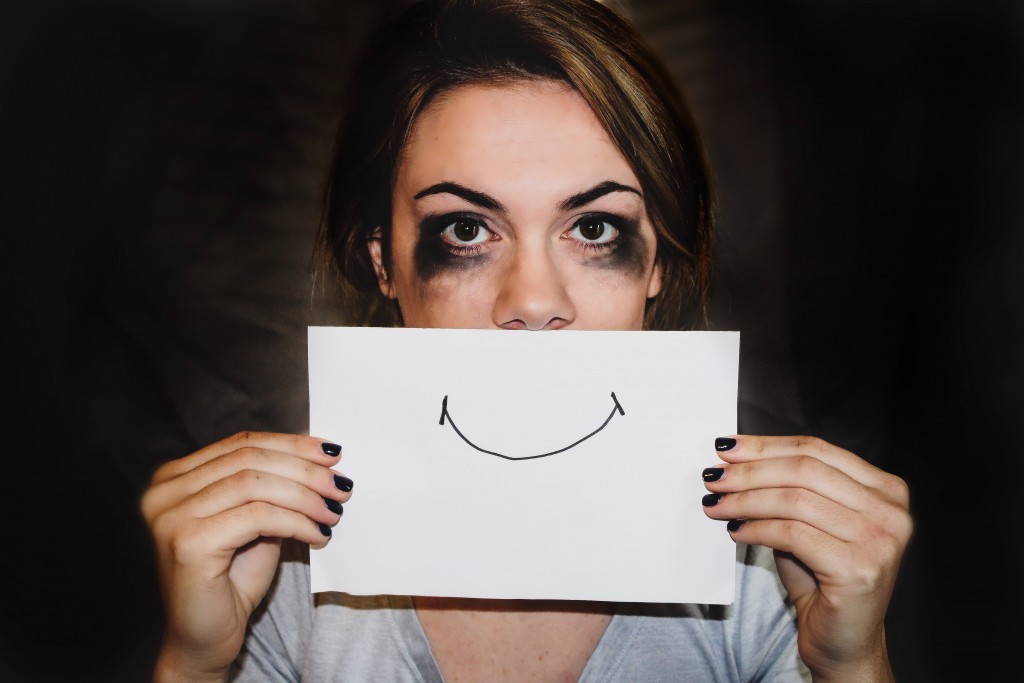 Turn that frown upside down, hopefully? // Photo by Sydney Sims on Unsplash

We’ve been asking members of the KC community to submit stories about life under quarantine, protests, politics, and other subjects that require discussion. If you’ve got a story you’d like to share, please send it to brock@thepitchkc.com for consideration. Today, local therapist Dawna Daigneault shares with us some thoughts on fighting back against automatic thoughts and re-programming yourself for happiness.

What if we can change how our thoughts and feelings get paired up, even if most of them came together during childhood?

In her article about Facial-Feedback Theory, Julia Thompson said that “Our expressions are instinctual, but they’re also learned from others. Did you ever notice a child’s smile that looked identical to the parent’s smile? That can happen not only between biological parents and children but also between parents and their adopted children. It’s because they imitate their parents’ expressions.”

If your mom always felt too cold and your dad always felt too hot and they couldn’t agree on where to set the thermostat, you may have had the experience of them complaining about their personal misery because of the temperature. The pairing of their thoughts about personal comfort level with the feeling of misery can be learned and repeated without awareness. We can pair-up the thought I’m too hot or I’m too cold with the feeling of misery and not remember why. 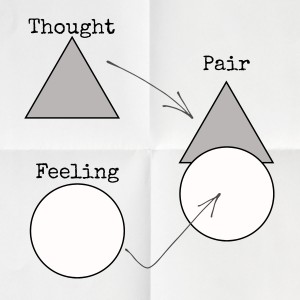 There are Seven Universal Emotions; Anger, Fear, Disgust, Happiness, Sadness, Surprise, and Contempt. I want to expand the definition of Happiness to include these feelings that have been reported by clients like Satisfaction, Contentment, Delight, Enjoyment, Elation, Carefree, and Well-being. I will add feeling Okay because Merriam-Webster.com lists feeling acceptable and delighted as related to feeling Okay. I also want to include some feelings that may seem neutral but are more positive than not most of the time, like feeling Curious, Interested, Open, Capable, and Fine.

Lots of auto-paired thoughts and feelings are showing up right now. More people are telling me that they are “having more bad-feelings this year” and that adds weight to how overwhelming the year already seems. The thoughts aren’t new to the people thinking them but the feelings that are paired with the thoughts seem heavier. Such as when a reoccurring thought like, “I can’t fix the pain and confusion for people I care about!” – gets paired with these weighted feelings; disempowered, helpless, or fearful – our nerves become frayed over time.

When a thought and feeling get paired up early in life and then employed by us multiple times, it could be a pair we assume is normal. Normal doesn’t mean helpful. It may be common place in your family or friend group to pair certain thoughts with a limited number of feelings to the point which that pairing becomes a habit and the limiting of options is habitual, too.

We don’t take the time or want to expend the energy of trying out all of our feelings with each and every thought. That would take too much time and energy. It could result in hours of trying things on that don’t fit and, it’s not efficient. It’s easier to accept the set of already paired thoughts and feelings we learned from our parents because they are already acceptable, familiar, and fast. 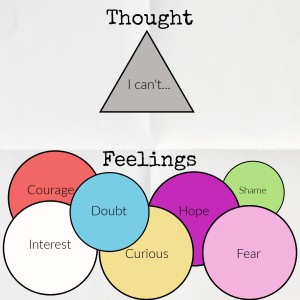 There are more choices available than you’ve been practicing. Too many choices can make creating a new set of paired thoughts and feelings seem like a big task, but if some of the old pairs aren’t working for you, a different feeling may be worth the effort that shopping for a new one requires.

When my youngest child, age four, wanted to take skating lessons, I found myself sitting on a hard bleacher in a cold ice-skating rink every week. On one of the first days during the free skate time, my kiddo came around a corner slowly, still figuring out how to be upright, and then dropped straight down into a facedown snow angel. I kept my eyes fixed on my little fighter who was flat down on the ice and these sweet, confused eyes looked back up at me. I knew these little confused eyes were searching for my reaction.

I responded with a surprised but encouraging look on my face and said, “Whoops!” Then my snow-covered kid copied my response in feeling, not word. This kiddo was no longer confused about how to feel. The thought hadn’t changed, “I fell down” but the feeling wasn’t heavy enough to keep them down.

They got up, brushed off the ice dust, and proceeded. I remember thinking that I didn’t want my kid to be afraid or ashamed of falling. I chose to show them a different feeling, a preferred feeling rather than my programmed feeling of failure. This feeling was my preference in that moment, not my kid’s. I based the decision on my belief that they would be falling down often if they decided to keep skating. It seemed responsible and efficient at the time to not attach a heavier feeling to the event. 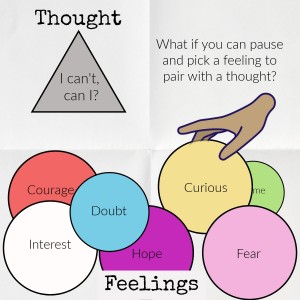 Feelings can seem automatic because once we have practiced pairing them with specific thoughts for years, we forget that we have a choice. The Lazarus Theory of Emotion states that a thought precedes the emotional activity, (Christopher L. Heffner). I think thoughts are neutral, and they get paired with a feeling which provides the tone and the emotional experience of the two things once together.

Albert Ellis said, “…based on the assumption that human thinking and emotion are not two disparate or different processes, but that they significantly overlap and are in some respects…the same thing.” 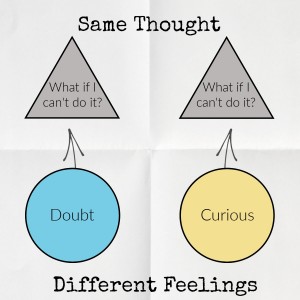 When we learn how to pause and select a different feeling, than the one we’ve always had paired up, we find the peace hidden in that pause – the peace which comes with choosing an experience that feels less heavy and more helpful, even though the thought remains the same. When we feel frayed by the thought/feeling pairs that disrupt our peace – we can practice a more powerful pause.

The Power Pause is useful when you are compelled to stay in a difficult chapter of your life because it is important or meaningful to stay in the fight. When you catch yourself feeling frayed by the fight, and in need of closing the book for an emotional break, you can. The Power Pause helps us renew our energy, rest from the strain, and remember what contentment feels like, even if just momentarily.

The Lazarus Stress Model (LSM) references three stressors (1) Harm, (2) Threat, and (3) Challenge, (H. W. Krohne). Many of the clients I have continued working with during the current season of Pandemic, Protests, and Politics are feeling threatened. This feeling of threat (the anticipation of personal harm) is attached to thoughts most of us can’t stop having because the story is constantly in front of us or happening to us. 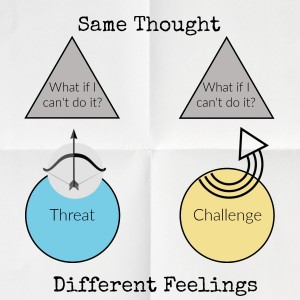 The shift from one feeling to another is difficult when the feeling is strong like feeling threatened. It takes a similar strength of feeling to make sense as a replacement. The replacement for feeling angry isn’t to feel happier. The idea is that some feelings seem heavier than others so, a lighter feeling would seem ineffective, even silly, as a replacement. Borrowing from LSM – when feeling the weight of threat, instead of staying in the threatened emotion we can convert it to a sense of challenge.

The feeling of rising to a challenge, in LSM, results from a demanding experience that a person feels confident about mastering. This doesn’t say, has mastered, or even knows how to master – it is the belief that overcoming something is possible. We can substitute courage, fearlessness, tenacity, and/or resolve as the preferred feeling to pair with the thoughts that have previously been paired with feeling threatened and afraid, disheartened, or overwhelmed. We can also check-in with what we need in the moment. When we can’t fix the big problem, can we be okay not having the answer yet? Yes, giving ourselves permission to still think the challenging thought pairs and to feel okay about not having all the answers is wise and kind. 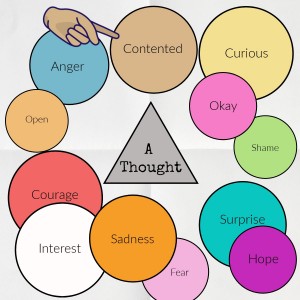 One of the more helpful pairings to any thought, especially one that has been problematic, is to feel okay about yourself. Feeling okay, no matter what, can become a bookmark feeling. You can let it hold its place in the pair until another feeling makes sense as a substitution. This is also a great bookmark for pausing any chapter in life which starts to feel overwhelming so, you can remember what purposeful contentment brings back to the narrative.

I’ve offered a simplified and adapted version of a technique called Cognitive Restructuring which originated in Rational Emotive Behavior Theory (REBT). The basic steps in this model are;

If your feelings are so heavy this year that you are starting to have frayed nerves then talking to a Professional Counselor can help. To learn more about how to use this model, or a similar process for continued personal growth, call a counselor in the Greater Kansas City Area listed at www.ribbonofworth.com or find a therapist through your insurance provider.