KC Voices: A Splash of Life KC’s updated status with the dangerous buildings list and what comes next 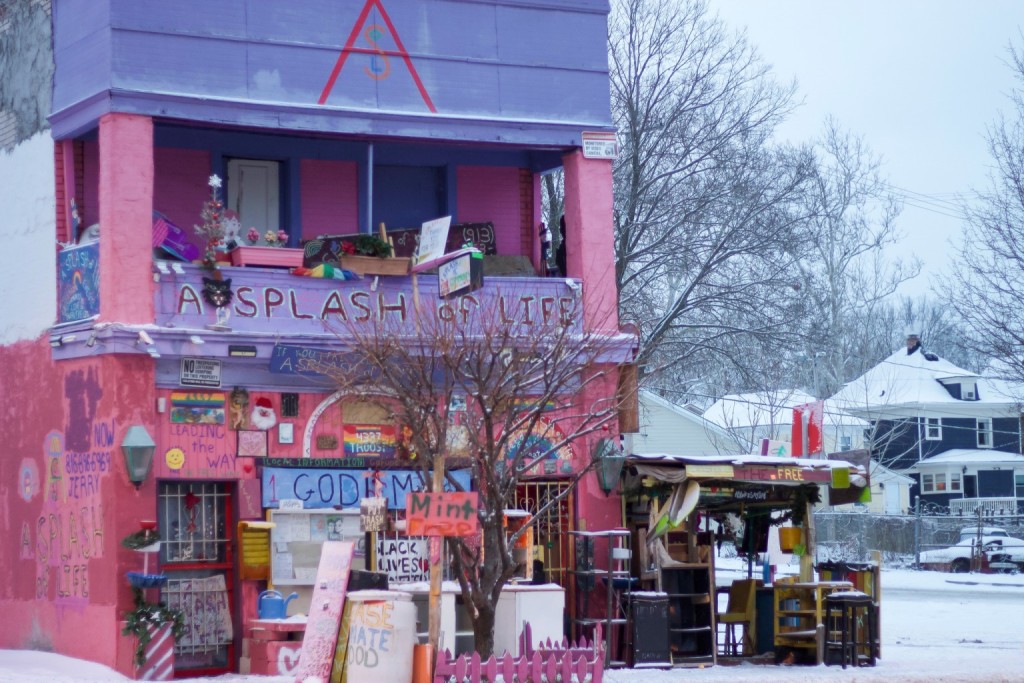 We’ve been asking members of the KC community to submit stories about their thoughts and experiences in all walks of life. If you’ve got a story you’d like to share with our readers, please send it to brock@thepitchkc.com for consideration.

We’ve previously covered the Splash of Life KC building on Troost being placed on the city’s dangerous buildings list. Today, Lydia Fultz updates us on what happens next.

On a frigid Saturday morning, two people sort through the donations in front of A Splash of Life, the distinctive pink outreach center on Troost Avenue. Clothing and household items fill the bins and racks that extend from the rainbow-festooned storefront to the curb. The space is unattended and donations are self-serve, allowing people to get what they need regardless of time or day.

But the inside of the building remains unoccupied. Last August, local media outlets reported that A Splash of Life was slated for removal from the dangerous buildings list. However, the building at 4337 Troost Avenue is still on the list with the status “Rehab By Owner In Progress,” hence outdoor operations in dropping temperatures.

“A Splash of Life building is structurally sound,” says Monica Castro, Public Information Officer for Housing and Neighborhoods. “However, it remains on the dangerous buildings list because of flooring concerns, specifically the second floor.”

The uncertainty surrounding A Splash of Life’s future has been an ongoing saga since Jerry Crowell purchased the property for $8,000 in 2013. Crowell bought the building with the intent of living on the second floor and turning the first floor into a community center and event space. This vision has changed little over the years, but Crowell has struggled making the repairs necessary for the building to be inhabitable.

“I am just one person trying to help the community,” Crowell says. He stated that renovation has not been completed due to the high costs associated with the project and the fact that he does not receive help from volunteers. He also mentioned past setbacks, including material theft and a stop-work order issued by the city.

Crowell has faced other challenges as well, including a fire and subsequent emergency demolition order in 2021. He has also drawn criticism from residents and business owners in the Manheim Park neighborhood who have voiced concerns about a number of issues, including the structural integrity of the building.

“Why is that building still standing?” asked Vicky Smith. Smith is part owner of two commercial properties directly north of A Splash of Life, along with her grandson Dontavious Young.

According to Smith, other dangerous buildings in the neighborhood have been demolished, leading her to question why A Splash of Life has been spared the same fate.

“I just don’t see what the redeeming quality is,” she says.

Illegal activities on and around A Splash of Life property have been an ongoing problem as well, according to Young.

Young says these activities were especially problematic for the daycare center located in one of his properties. The space was previously occupied by Dream Palace Education Center, which moved out at the end of October. According to him, the building’s proximity to A Splash of Life was one of the reasons the tenants left.

Other neighbors doubt that renovation is even feasible for the building. Bill Drummond, Board Secretary and Chair of the Health and Safety Committee for the Historic Manheim Park Association, discussed the multitude of problems with A Splash of Life, which Drummond claimed is unstable and lacks utilities. In the past, Drummond has supported Crowell in defending A Splash of Life against demolition, but he now believes Crowell’s mission is in a “near-end chapter.”

“The building has got challenges beyond what one person can handle in a nonprofit or an organization,” Drummond says. “A construction company could do what he needs to have done. Jerry by himself cannot do what’s going to have to happen.”

Ultimately, residents may not have the final say in whether or not A Splash of Life remains standing. According to Castro, the building will not face demolition unless conditions worsen or a catastrophic event occurs.

“The city takes dangerous buildings very seriously and works to educate the property owners to bring the structure up to compliance,” Castro says. “At the city we believe in remediation over demolition.”

In regards to the flooring repairs mentioned by Castro, Crowell says he is almost finished but did not provide an estimated timeline for completion as working on the building is difficult in the winter.

A Splash of Life may eventually come off the dangerous buildings list, but for now, the saga continues.