"You're one of us. We're here because we need you." 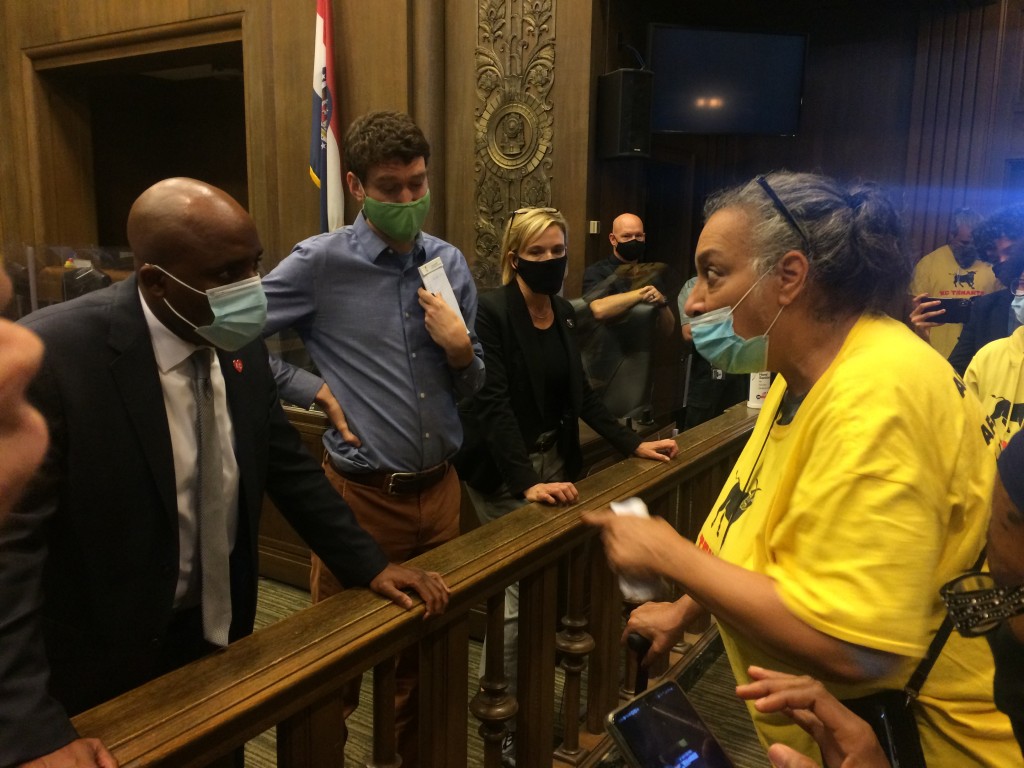 KC Tenants took their demands to City Hall, seeking an audience with Mayor Quinton Lucas to discuss the promise the group says he made to support their People’s Housing Trust Fund plan before crafting his own proposed version of the housing trust fund ordinance (Ord. 210873).

The day before, Lucas cancelled a planned Oct. 13 Planning and Development meeting, citing “administrative error.” Had the meeting not been cancelled, Lucas was expected to present his ordinance to the board, and KC Tenants had made plans to show up to address their grievances.

The abrupt cancellation added fuel to the fire for the KC Tenants, who say that the mayor’s ordinance does not properly address or implement several of the concerns they’d outlined in their People’s Housing Trust Fund proposal, which they’d submitted to Lucas at his request, on his birthday, Aug. 19.

The proposal put forward by KC Tenants includes a governance structure where tenants have the most power and oversight over the Housing Trust Fund. It also includes proposed programs to protect the rights of tenants, ensure tenants are securely housed, and build power among poor and working-class tenants in Kansas City. Above all, KC Tenant’s proposal maintains the union’s core belief: that the people closest to the problems are closest to the solutions.

“The Mayor’s ordinance does not include any oversight board, proposals for non-market social housing, or ongoing revenue sources; this is just another developer slush fund, a gross misuse of federal stimulus money,” KC Tenants says.

The group decided to seek an Oct. 13 audience with Lucas either way, and entered City Hall around 12:15 p.m. It took about an hour to get approximately 50 protestors past security and up to the 26th floor, where they would be redirected to the 29th floor—the City Council Chambers and Mayor Lucas’ office.

KC Tenants spent nearly another hour there, demanding that Lucas come out to address them. They brought forth speakers to tell personal stories of their housing struggles over the past two years, and joined together for chants of “all these lies are getting old, Mayor Q is bought and sold” and “house the people.”

“Let me tell you a story about Mayor Q. He comes from homelessness. He knows it. That’s why he should recognize our struggles. Now, you just have the politician, but somewhere within him is that little boy who knew poverty,” KC Tenants’ Melissa Civil says.

Meanwhile, Lucas, who the day before had canceled a planned City Planning and Development meeting for that evening, was apparently hosting a television interview in his office. If that was the case, the mayor undoubtedly heard the roars of the crowd—which could easily be heard from at least three floors down.

At approximately 1:45 p.m., the team was informed that Lucas would speak with them for 10 minutes on floor 26 in the media room.

“Why can’t he come to us here?” someone shouted.

Jenay Manley of KC Tenants made a quick call. She hung up and informed the group that they would have 10 minutes to shuttle the large group down three floors. Once everyone was in attendance, the Mayor and his team would start the clock on the 10 minute allotment. 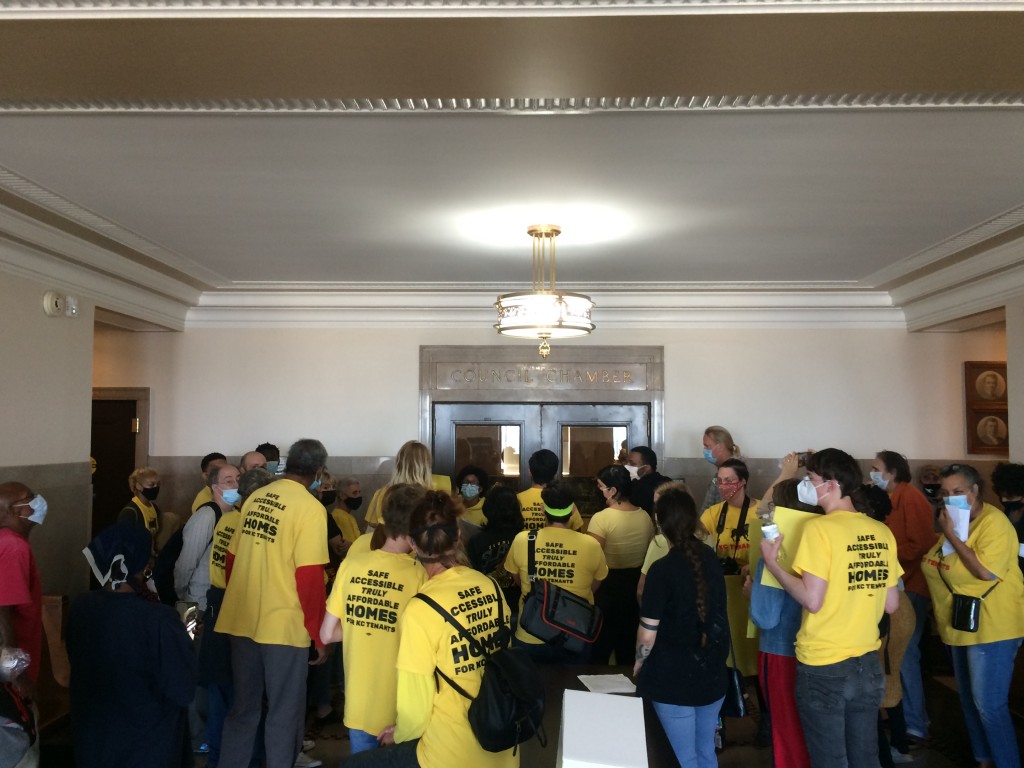 After about 10 minutes to get the full group assembled, the tenants entered the media room to see Lucas and several of his city administrators seated inside.

KC Tenants’ Julie Byerlee, an Armour Flats tenant, opened the conversation. She described her own displacement and demanded that the mayor commit to the People’s Housing Trust Fund.

KC Tenants called the mayor’s administration out on creating an ordinance that did not consider their proposal in full. Lucas’ ordinance ignored the group’s requests for a tenant oversight board, dedicated public revenue through reallocation of police funds, a gentrification tax, and the establishment of a municipal social housing program.

Lucas replied that although he’d been in talks with KC Tenants since June about their proposal, he had never agreed to “just take a copy of an ordinance written by any group and propose it.”

KC Tenants’ Ammaarh Khan pressed the mayor on social housing, to which Lucas says he “would need a reminder of what social housing is.”

Another issue the KC Tenants emphasized was the disparity they saw between what city hall has defined as affordable rent and the likelihood that $900 for a studio apartment is still too high a figure to be realistic for struggling tenants.

“We call this affordable. No, this is not affordable,” KC Tenants’ Leslie Vaughn says. “This is a way for out-of-state landlords or developers that take advantage and rip off tenants like me. Housing is considered a commodity for landlords to make a profit off of even during a pandemic.”

“I’m probably not committing to what [KC Tenants] had proposed to me,” Lucas says.

The majority of the KC Tenants crowd filed out of the room chanting “house the people.”

A few stayed behind to speak to Lucas one-on-one, including recent evictee, Sabrina Davis, who had earlier given a speech to fellow protestors on the 29th floor.

Despite health issues that include “spinal stenosis, degenerative disc disease, bone and joint disease,” Davis, 63, who attended the rally with a walking cane, had been on her feet most of the day, but wanted to have the last word.

“I can barely walk and I’m here fighting this fight because it means something not just to me, but to millions of people in this country. Mayor Lucas, you came from Kansas City, you’re friendly, and you’re one of us. You’re one of us. And when we voted for you in the office, when I voted for you and I knew you were going to do the right thing for the people,” Davis says. “We’re not here to put you down. We’re here because we need you. Everybody in this country is keeping track of what’s going on in Kansas City today. We’re looking at you. What are you going to do now?”

Afterward, outside city hall, Davis was the last one down the steps.

“That compassion that I noticed in his eyes, I just hope that that was real. I hope that that side of him is going to come through bring out the humanitarian in him,” Davis says.

Davis added that she didn’t plan what she was going to say to Lucas before she spoke up.

“It was right off the top of my head because that’s the truth. I’m living it. I’m a living, walking example of what so many people are experiencing right now,” Davis says.