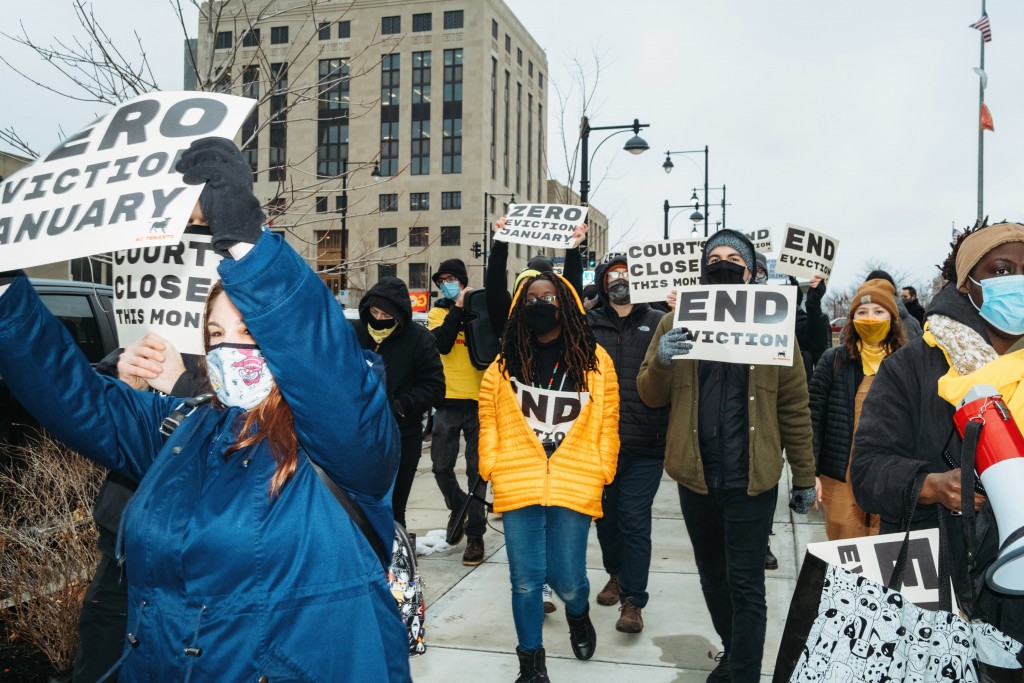 After days of protest, KC Tenants made a huge win for the cause today. After mounting pressure—that pressure being continuous protest outside of the courthouse and his house for the past eleven days—Judge Dale Youngs signed an order stopping all eviction summons, hearings, and writs of execution trough Jan. 24. KC Tenants already halted over 322 evictions last week during the beginning of Zero Eviction January as they physically blocked the doors to the courthouse and stopped proceedings at both Jackson County courthouses.

The group also hung a banner on a bridge heading north into downtown on I-71 that reads “Evictions during a pandemic are a death sentence.” The banner has hung from the bridge since Jan. 1.

The order comes after Judge Youngs, along with the 16th Circuit Court, claimed that there was no way to stop evictions. Such evictions include those that took place illegally during a pandemic, an action the courts also claimed there was no way to stop. The release order is in itself an admission that the courts do in fact have the power to stop these evictions. KC Tenants also notes that the order is an acknowledgment from the courts that all evictions are an act of violence.

TURNS OUT THE JUDGE HAD THE POWER TO STOP EVICTIONS ALL ALONG.

Protests began at the Courthouse during the beginning of the month in order to halt evictions during the coldest time of the year. KC Tenants’ honorable Zero Eviction January campaign took on even more urgency when court deputies shot and injured a man during an eviction Jan. 8. Protests outside of Youngs’s house commenced after news of that shooting broke.

“KC Tenants remains focused on our goal to end ALL evictions. This order is not at all sufficient, as it only stops evictions for the next two weeks. Tenants need a full eviction moratorium: NO filings, NO summons, NO hearings, NO writs of execution, and NO arbitrary end date,” KC Tenants say in a press release. “We need rent and mortgage cancellation and rental debt erasure.”

The Court cites the Friday, Jan. 8 shooting as the reason behind the order. However, the order surely came faster and stronger because of the action of KC Tenants. After tenant’s told their stories, days of protests took place and the courthouse doors were blocked, and countless other actions were taken, the will of the people made this change.

Official statements on this keep mentioning that there is "no danger to the public" as if someone wasn't shot inside their own home. [The entire thread here is shocking, including a somewhat bewildering chain-of-command? We're currently investigating as well.] https://t.co/hrL8g8Xcyo

Kansas City’s homelessness levels have risen to those of the Great Depression. More evictions will be looming after the order ends Jan. 24. This order, like KC Tenants note, is not a complete win. The weather will still be cold after Jan. 24 and the pandemic will still be raging. However, this does show that protests work.

[Update: A previous version of this article identified Youngs as having made a ruling in a case where a different judge presided. We have corrected that information.]