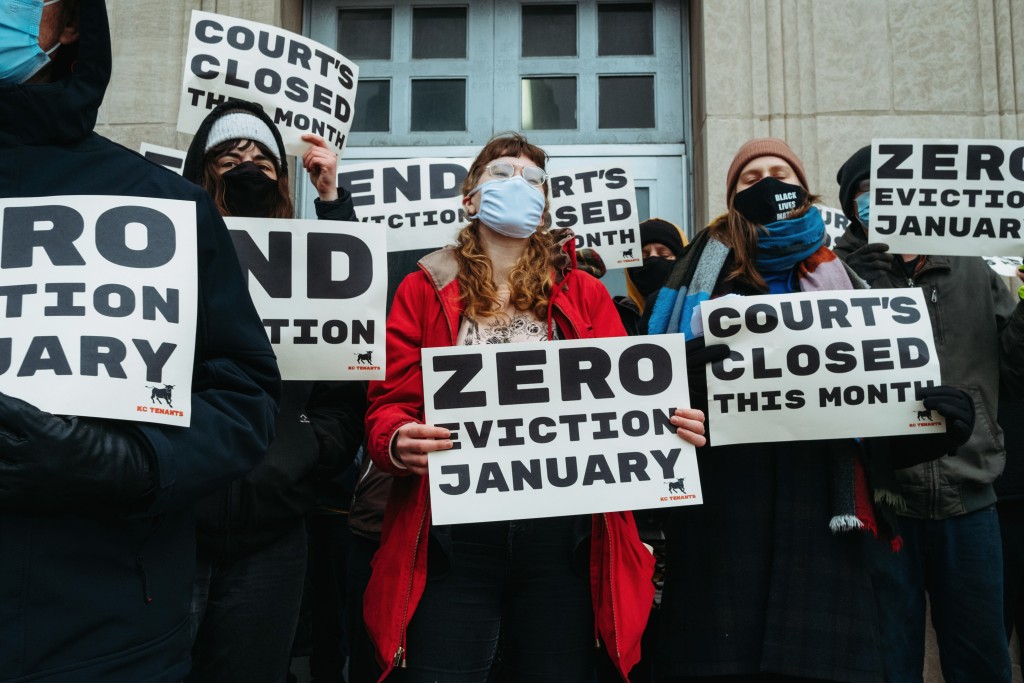 KC Tenants activists blockade an entrance to The Jackson County Courthouse in an attempt to shut down eviction court proceedings. KC Tenants also disrupted teleconference hearings delaying at least 51 evictions on the morning docket according to KC Tenants. // Photo by Chase Castor

KC Tenants shut down both Jackson County courthouses’ eviction proceedings this week as they successfully launched their Zero Eviction January campaign.  On Tuesday, 103 eviction hearings were halted, with another 219 today.

Anyone driving north on I-71 into downtown this week has gotten the memo: “Evictions during a pandemic are a death sentence.” The banner has hung from a bridge over the interstate since January 1st, as KC Tenants commits to preventing a single eviction from going forward in Jackson County this month.

This morning, rescheduled from snowy New Years Day, KC Tenants rallied at the downtown Jackson County Courthouse to officially kick things off. At least 75 leaders and allies—everyone wearing masks—gathered in 32º weather to block the doors of the courthouse while chanting, cheering, and crying while sharing their stories.

Signs held by protestors included ones proclaiming “Courts Closed This Month.” Of course, much of court is happening remotely, with most evictions being heard via teleconference. While protestors blocked the physical courthouse doors, more members of KC Tenants flooded the phone conferences of the five courtrooms with evictions on the docket, disrupting the ability of the court to function. They took turns speaking a script, whose power grew with its repetition:

“No one should be evicted during a pandemic. This is not justice. This is not due process. This is violence. All evictions must end. People are dying. Tenants on the line: this is not your fault. You deserve a decent home, you deserve shelter during the pandemic. You are not alone. KC Tenants has your back. Judge, you are complicit with every eviction you hear. You are making people homeless during a pandemic. You are killing people. It doesn’t have to be this way. You have a choice. End evictions, people are dying.”

Tuesday afternoon’s teleconference eviction hearings were halted after just four minutes of protestor disruption. Others took longer, but ultimately, every eviction hearing scheduled to take place this week has been rescheduled, giving those tenants a little more precious time in their homes, during the cold winter of this pandemic.

Kenneth Gobble was scheduled for an eviction hearing on Tuesday. Due to KC Tenants’ successful disruption, his case was continued until February 2, which, he emphasized, is not enough time. Due to the pandemic, he lost one job, and has had hours and pay cut at another. He’s tried to pay everything he can to his landlord, despite electrical issues leaving him with only two working outlets in his apartment. And after his gas was cut off, he sits by the oven for warmth. “Nobody asked to be in this situation,” he said. It’s a systemic problem that individuals are being punished for.

After his speech, the crowd chanted back at him repeatedly, “Kenneth, we have your back!” Every speaker, after sharing their experience of hardship and injustice, was met with this powerful, unequivocal support.

Gabrielle Diamond came to the mic moved to tears by the support of the crowd around her. She had heard about KC Tenants when they interrupted one of her eviction hearings. Hearing them say that they had her back made her feel less alone. Her landlord has not followed agreements, harassed her, thrown trash at her, and destroyed her property.

Keonya Mcintosh is homeless and living in her car with her three children, after she was evicted from Blue Valley Townhomes. Her son’s friend was shot nearby, and ran to their house for help. Mcintosh rushed home from work and helped save the child’s life. The next day their landlord informed her that they have ten days to be out. Mcintosh stood alongside a member of KC Tenants as they read her statement for her, saying, “My kids are not okay. I can see the depression on my daughter’s face.” She spoke to how evictions are especially dangerous during a pandemic: “I can’t stay home to stay healthy if I don’t have a home.” And she called on the support and solidarity of the community: “I need you. I need your solidarity, Kansas City.”

While the CDC moratorium on evictions for unpaid rent remains in effect until the end of January, it clearly isn’t enough to protect tenants. The order only applies to certain tenant situations, and does not prevent landlords from starting eviction proceedings. Other cities and states, including Kansas, have put their own moratoriums in place to keep residents housed during the ongoing pandemic. But Jackson County judges, overseen by Presiding Judge Dale Youngs, have continued to evict residents.

The 322 Kansas Citians on the docket for eviction this week have stories like the ones shared on the courthouse steps. While the judges presiding over eviction cases have the power to delay them while the pandemic rages on, KC Tenants is not waiting for them to do the right thing. They are taking matters into their own hands, to keep their neighbors safe and in their homes. Zero Eviction January includes in-person actions at both Jackson County courthouses each week, and daily digital actions, such as calling and emailing city council members to demand rent freezes and eviction moratoriums.

Makaylah (who asked to only be identified by first name) was attending her first KC Tenants rally as she faces eviction herself. Of the landlords and judges, she says, “If they wanna commit violence, they’re gonna have to look me in the face when they do it.”

To learn more or get involved in this month’s actions, you can find KC Tenants on Twitter. Also, you can buy supportive merch right here. We bought plenty.