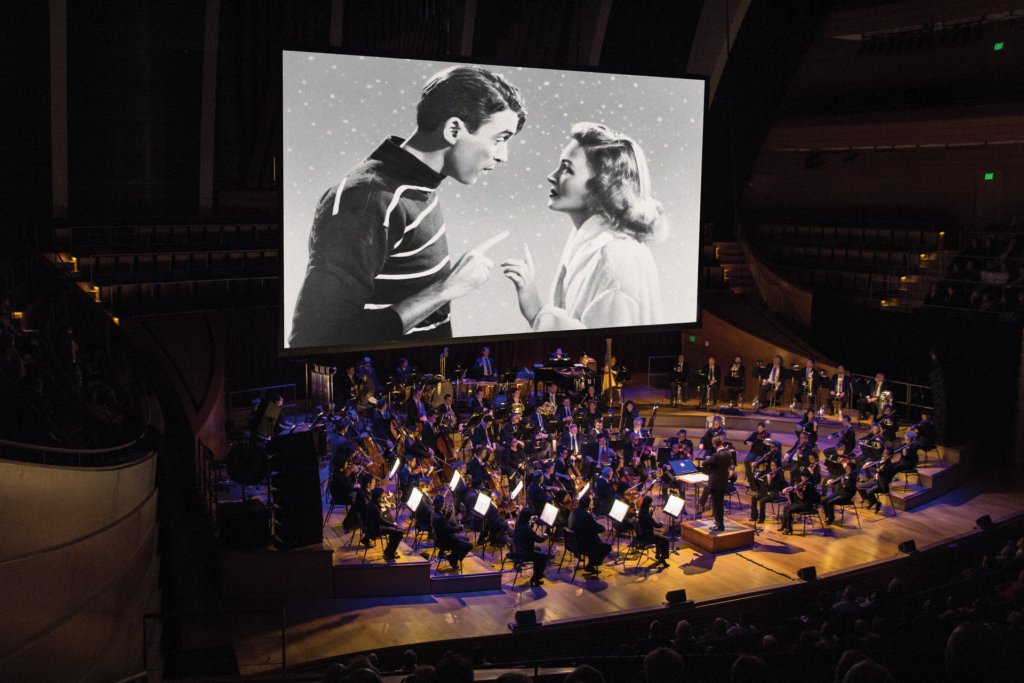 To see a movie with its score performed by a live orchestra is to see it entirely anew. Lucky for us, Kansas City Symphony is screening/scoring three of the most popular movies of all time over the next few months.

“When you are performing [a score] live, the music is so much more present,” says Jason Seber, Kansas City Symphony’s associate conductor. “All of a sudden, the music takes a much more dominant role in the way the story is being told.”

Seber is taking the lead conducting Dimitri Tiomkin’s score for Frank Capra’s It’s A Wonderful Life, in December; John Williams’ work for Star Wars, in January; and Max Steiner’s Casablanca in February. (In January, KCS will also screen the fourth film in the Harry Potter series, but that show brings its own conductor.) Seber first tried his hand on this kind of thing with “Pixar in Concert,” back in 2016, when he was brand-new to the gig. He’s since conducted scores for E.T. The Extraterrestrial, Back to the Future, Hitchcock, Home Alone, Raiders of the Lost Ark, and both recent Star Trek films.

Kansas City Symphony has run these music-and-film productions since 2013, though. It started out as Screenland at the Symphony, hosted by Screenland’s Butch Rigby. Halfway through last season, the series was rebooted as Film + Live Orchestra, but the essence is the same, and it continues to be a wildly popular series, with capacity audiences in Helzberg Hall full of movie fans psyched about this new way to express their fandom. The shows tend to bring in new, multi-generational audiences — always welcome news for a symphony orchestra. In the last 12 months, approximately 34 percent of ticket sales for the film series went to new attendees, with 29 percent of those returning to see another film.

For Seber, the process starts two to three months before showtime, when he gets the score and practice film, which includes visual cues — streamers and punches — and aural cues, like a click track (if the film has one).

“You are learning the music just like you would anything else, but then there’s this whole extra layer of learning how it coordinates exactly with the film and understanding all the symbols in the score,” Seber says. He puts in between 60-80 hours of preparation — roughly comparable to learning a new full-length symphonic work.

It’s A Wonderful Life, scored by Tiomkin, is a Christmas-season staple, of course — the type of flick many of us have seen dozens of times. Still, it’s a good bet that, no matter how well you know the movie, the Symphony’s performance will surprise you.

“Capra, the director, changed a lot of things,” Seber says. “He removed a lot of music completely [he supposedly thought Tiomkin’s music was too dark], and he also reassigned some of the music for different scenes. We’re doing the restored version of exactly the music that Dmitri Tiomkin envisioned.”

The sweeping grandeur of Steiner’s score, from Casablanca, is indelibly linked to one of the most highly regarded films in history, and perfectly captures the era. But neither Steiner nor Tiomkin are as baked into today’s cultural consciousness quite like John Williams and his score for 1977’s Star Wars.

“There was a time period, a golden age of Hollywood, where the orchestra played a prominent role in the scores of great films,” Seber says. “Then we went through a period in the ’50s and the 60s where popular music became the dominant voice of many film soundtracks. John Williams was the composer that brought it back — brought back the full orchestra, and that symphonic experience became the emotional underpinning of a film again.

“I’m so excited we are doing Star Wars I can’t even … ” Seber continues, momentarily speechless. “In my view and in many people’s view, he [Williams] is the cinematic king. The music almost becomes another character in the movie. If you had told me when I was five years old, ‘One day you are going to conduct that with a full professional orchestra,’ it would have blown my mind.”