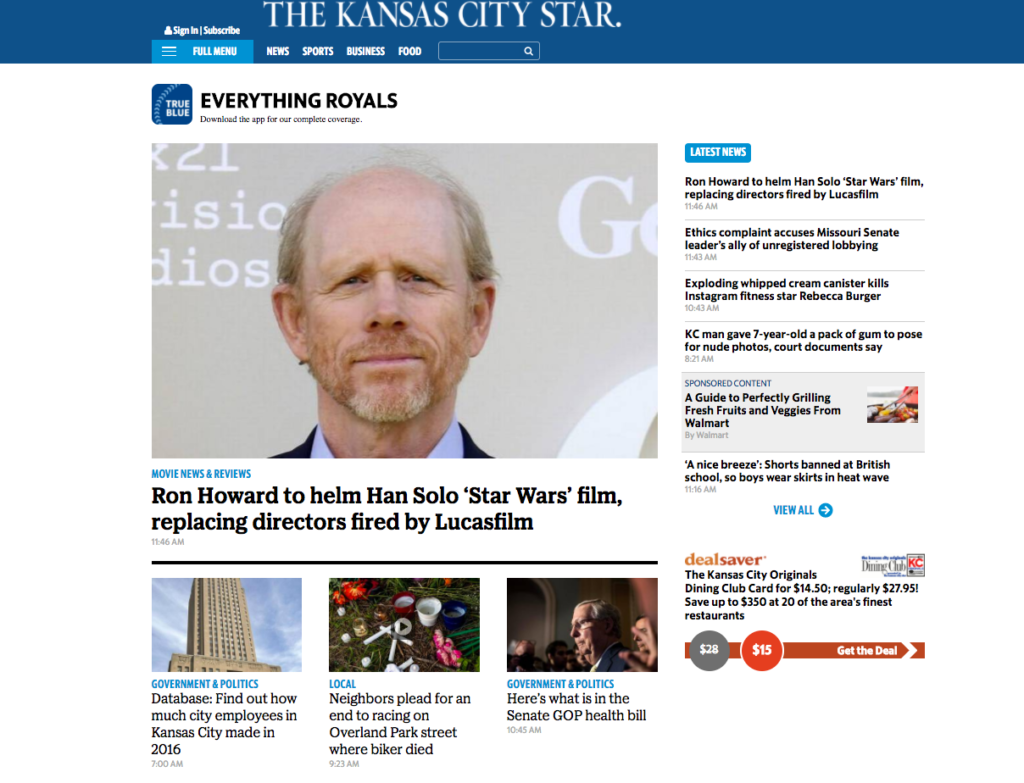 The GOP’s Senate bill to wipe away the Affordable Care Act arrived this morning, confirming the fears of pretty much every non-wealthy U.S. citizen about his or her ability to stave off infirmity, early death and/or bankruptcy. But perched atop The Kansas City Star‘s paywall-fortified homepage moments ago was the day’s most important story. See above. (Squint and look down and to the right for the part about Sen. Mitch McConnell’s sodomizing of 25 million to 50 million Americans.)

If you’re like me, you’re mostly just relieved that Ron Howard isn’t dead. You see a giant picture of him staring out of a news website on a day when politics and government in this country, and the atmosphere over Europe, are basically on fire, you figure it must mean lights out for Opie. But no, that big headline lets you regain your composure and get back to refilling your prescriptions while you can.

In fact, thank you, Star, for reminding me to stop taking Ron Howard for granted. The man’s movies are reliably entertaining, and he gets a lifetime pass for Arrested Development. Han Solo movie? Bring it on — his chances of making a decent Star Wars flick are probably better than those of the guy doing the last installment of the mainline new trilogy, whose new picture has been greeted like a Wookiee turd in a Zima bottle. Also, his 1994 movie, The Paper, is a highly watchable time-capsule valentine to the business of gathering and printing the news at the end of the last century — back when the news was a thing that could be widely agreed upon and newspapers weren’t expected to generate annual growth of more than, say, 8 percent.

Ah, fuck it. You win, Star. I’m going to spend the rest of the day watching YouTube with the blinds shut, the phone turned off and nary a browser tab set to The New York Times or The Washington Post.