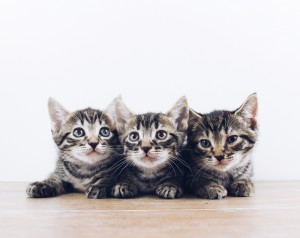 KC Pet Project partnered with Austin Pets Alive! to transfer 27 cats and kittens to Kansas City from Texas via a private jet. These felines were at risk of euthanasia mere days ago due to Winter Storm Uri.

Winter Storm Uri was a major coast-to-coast storm February 12 through 16 that Ted Cruz used as a vacation opportunity due to the amount of snow and damaging ice in the state of Texas. The state is still seeing the effects of that storm today.

Small, rural animal shelters across Texas lacked resources to care for the sudden influx of animals arriving at their doors.

The APA! Town Lake facility became a central transport hub for these pets in need after receiving urgent pleas for help. Shelter partners across the country arranged the next leg of transportation so these animals could reach their final destinations.

“After Hurricane Harvey, we rescued 5,000 animals,” says Dr. Ellen Jefferson, APA! chief executive officer and president. “We’re using the lessons we learned then to save every cat and dog we can.”

Kansas City is one of many destinations across the U.S. welcoming these pets with open arms. Animal shelter staff from Florida to Washington to Massachusetts are providing safe shelter and care to get them ready for adoption. 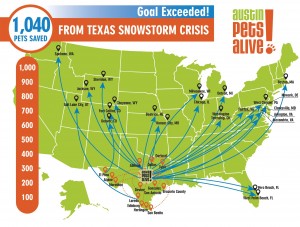 This is the second time in one week animals are being transferred from Texas shelters to Kansas City with a total of 52 cats and six dogs placed up for adoption through KC Pet Project. Cats and kittens, 27 of them to be exact, were met at the Wichita airport yesterday by staff members from KC Pet Project and have arrived at the shelter.

The private jet these felines were on was the third transport flight that David Nelson, the owner and pilot of the plane, has donated on APA!’s behalf. His efforts have helped saved 1,000 pets since late February.

Though they had been on a long journey, these cats and kittens promptly had examinations from KC Pet Project staff and those who need to be spayed or neutered were placed on their surgery schedule. Many of the cats were put up for adoption last night at KC Pet Project’s Petco Cat Habitat locations and today at Whiskers Cat Café.

Donations can be made to KC Pet Project to support these cats here. Charlie Hustle has recently released t-shirts and dog collars in partnership with KC Pet Project which are available here.