The annual KC Nanobrew Festival just can’t stay put. The homebrew festival, now in its seventh year, is on the move, to a much bigger space, the 17-acre Berkley Riverfront Park.

Saturday’s festival — from 2 to 6 p.m. — is a testament to Kansas City’s evolving beer scene, and to the work of organizers Chad Cummings, Chad Moats, Frank Rydzewski, Rob Rys and Tim Sady. Tickets ($35) include unlimited pours, a full-size souvenir glass and a $5 food voucher; they won’t last. (Click here for tickets.)

I caught up with Rydzewski via e-mail to discuss this year’s festival.

The Pitch: Why Berkley Riverfront Park?

Rydzewski: Every year, we have continued to grow, requiring us to look for a new location. While we really liked our location last year in the West Bottoms, construction of new buildings forced us to find another option. We were fortunate to get in contact with the Port Authority of Kansas City, and found Berkley Riverfront Park, which might be our new home for many years to come, due to its size, central location and the exciting development occurring in that area.

We’ll have more food trucks, more local craft breweries and some new vendors. Since it’s going to be a typical KC July day, we’ll also have misting tents and plenty of tent space to stay cool in the shade.

Something else that has continued to grow is the creativity of our local homebrewers, both in their brewing abilities but also in their booth setups and decorations. In addition to the usual tent-booth setup, we have beer being served from a Volkswagen van, from a tailgating trailer, and we even have a fully inflated British-themed “pub” that guests can go inside to get taps from some of our brewers. Something else that’s new this year is the addition of a couple meaderies to the lineup.

Who is the next big-small thing at this year’s festival?

I’m not sure which brave soul will be the next to make the move. Something I find interesting is to look at some of our local homebrew clubs, like the Missouri Mashers, whose members are responsible for over 50 of the brews on tap. With the level of talent as well as number of members, you have to wonder if something like a brewing co-op might be a possibility in the near future.

Are you guys still considering opening your own space?

I had to laugh a little when you asked that, because it’s kind of a running joke within our group. Every year, the five of us get together and discuss what it would take to get to the next level. We’ve gone as far as even looking at spaces. It’s mostly a fun thing to think about, but it’s not outside the realm of possibility to happen someday. Being part of the local homebrew community, we have the opportunity to hear a lot of the “war stories” of people who have gone pro. It’s not something to jump into without being fully committed.

What are you looking forward to drinking the most at this year’s festival?

Frank Rydzewski: This is a tough one. There’s always dozens of brews that are as good, if not better than anything you’ll find in stores. As one of the event organizers, I don’t usually get a chance to sample as much as I’d like, but there are a couple breweries I always try to sample, like Libre Brewing, SchuBrew and Eye for an Eye Brewing.

Tim Sady: I’m looking forward to some of the selections from Strange Days Brewing Co., such as Golden Gun (Belgian strong golden aged in martini barrel) or Gin & Juice (saison with brettanomyces, pineapple and gin-oak).

Chad Moats: I’m always a fan of Supernatural Brews Hallowpeño (a mild spiced Jalapeño ale in which the fruit blends with the citrus hops to enhance the flavor profile rather than overpower it).

Robert Rys: I’m really looking forward to Beer’d Brewing’s Needler IPA (IPA made with spruce needles), the Sweet Maple Bourbon Mead from Fringetree Meadery and any of the Kombucha blends from the Brewkery.

Here’s the list of beers at this year’s festival. 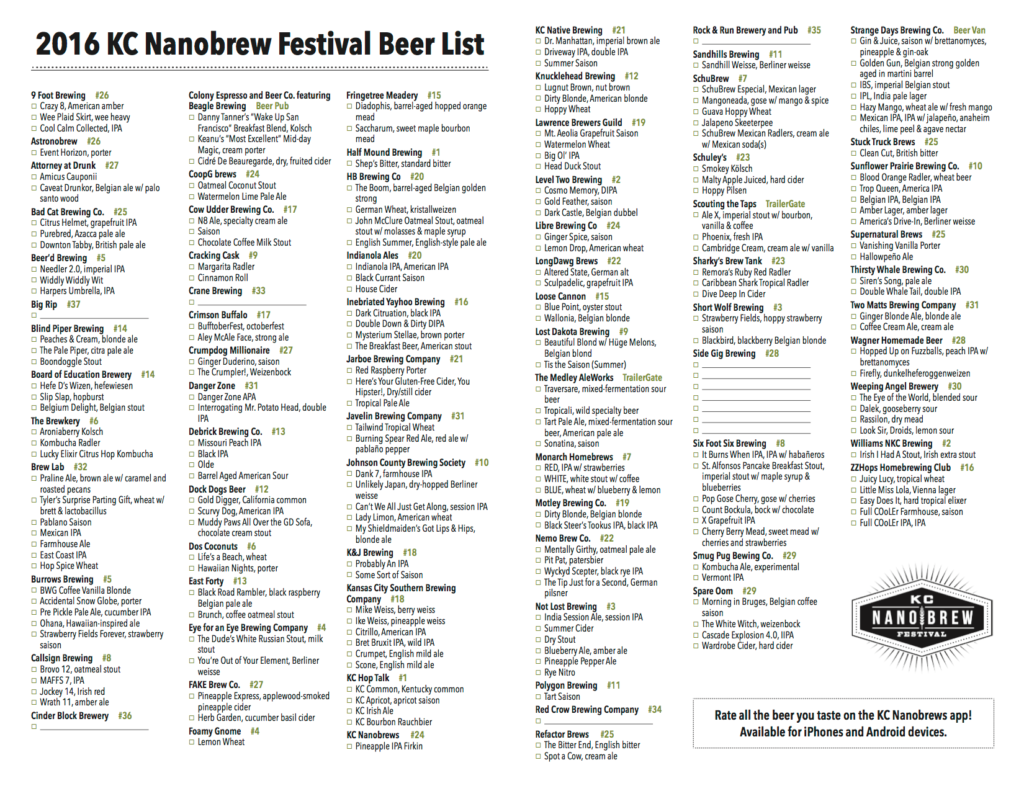