A friend of mine tells me he was scandalized by the prices at the one-week-old KC Kitchen & Pizzeria at 3906 Waddell Avenue, in the former Nichols Lunch location.

“It’s obscenely expensive!” he says, his face shading toward the color of tomato sauce. “They’re charging $30 for a pizza and $11 for a basic house salad.”

Still, this new midtown pizzeria, operated by 29-year-old Minnesota transplant Dan Clarkson Jr., in partnership with his father, Dan Clarkson Sr. — is a work in progress.

The first thing you notice is that the historic space, which for so long was home to a 24-hour-dining institution, has never looked cleaner. Last occupied by Sosa’s 39th Street Diner, it now sports flat, institutional tones of gray-blue on its walls, with gray-painted tables that suggest a prison mess hall.

What KC Kitchen & Pizzeria lacks in visual charm, however, it makes up in eccentricity. The flatware is rolled up in thin paper napkins that might include just a knife (as was the case in mine one day, prompting me to picture how I’d make my jailbreak) or might contain a fork, too. The Caesar dressing, prepared by the restaurant’s cheery manager (her name is Bronte, she told me, like the novelist sisters), is tasty enough but inadvisable for those who are purists about Caesar Cardini’s original recipe.

Still, the Clarksons — who began offering a full bar on May 10 — have big plans for the space. A menu expansion is planned for June, including burgers made with grass-fed beef, more salads and a longer list of appetizers. (There are standard-issue starts right now, and I must rule in favor of my affronted friend: $8 for fried jalapeno poppers really is a scandal.) 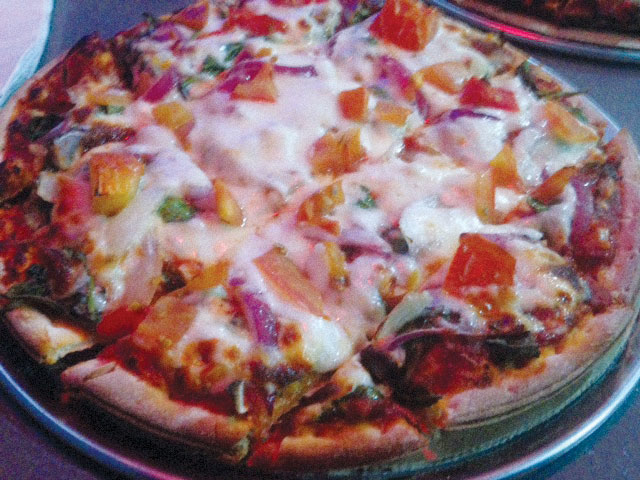 The pizzas I sampled weren’t extraordinary but tasted pretty good. The Margarita pizza is even less traditional than that Caesar salad, topped with fresh basil, yes, but also with spinach and red onion and tomatoes that were said to be hothouse but tasted as out of season as you’d expect right now. The 39th Street Special, with bacon, ground beef and both cheddar and mozzarella and, the menu says, is “served with a side of pickles upon request,” is a sort of inadvertent Nichols seance — it seems made for sleepless inebriates, in a mostly good way.
In that spirit, Clarkson plans to keep his kitchen open from 11 a.m. to 2 a.m. Sunday through Thursday and from 11 a.m. to 3 a.m. on Friday and Saturday nights. And at 2 a.m. on a party weekend, just about any price in midtown feels pretty fair.

More restaurant news:
A new dining venue in the West Plaza neighborhood is always an eyebrow-raiser. The Journeyman Café, the brainchild of brothers Kit and Ryan Boje, opened Monday, May 2, at 1121 West 47th Street. It’s a coffee shop from 11 a.m. to 3 p.m., serving pastries made at Baked in Kansas City (including savory rosemary-Parmesan scones that can be smothered in house-made pork-belly gravy), and then re-opens for dinner — a limited menu of small plates — from 5 p.m. to 9 p.m. on weeknights and 5 to 10 p.m. on Fridays and Saturdays.