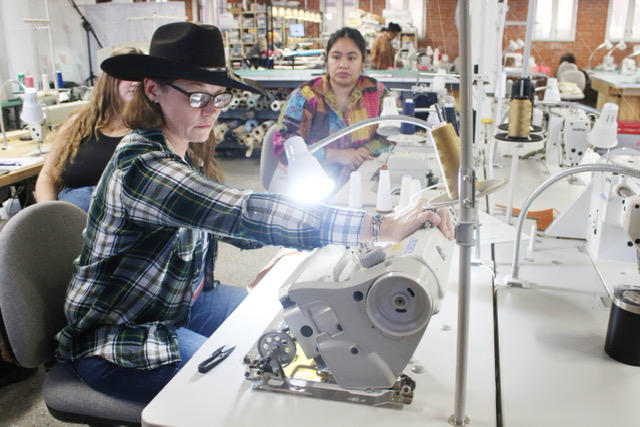 At The Sewing Labs, their finished product is about a lot more than cloth and thread. They’re helping people sew new paths in life through vocational training programs.

This program is also part of the U.S. Department of Labor’s Apprenticeship Ambassador Initiative because graduates move on to paid hands-on apprenticeships with local companies that last about a year and can lead to permanent employment.

“What we have realized is that this is a pathway out of poverty and into financial dignity. You can earn a decent living as a trained stitcher, and there’s such a huge need right now in Kansas City. It’s kind of crazy. We are flooded with employers and entrepreneurs who are looking to hire trained stitchers,” says Eileen Bobowski, executive director of The Sewing Labs.

But there isn’t just one kind of class at The Sewing Labs. There are more casual classes that aren’t part of an intense training program. For English language learners, they offer “Sewing as a Universal Language” in partnership with Literacy KC.

The labs rent their 4,000 square-foot Columbus Park space from the Don Bosco Community Centers. Staying close to both a bus stop and the street car line was important for them in making sure their underserved population could access the location easily.

Graduates of the program can go on to not only stitch clothing but things like upholstery, mattresses and other industrial items. They can also go into business for themselves, guided by entrepreneurial classes provided at the labs.

Bobowski’s philosophy is, “Let’s allow entrepreneurs to come into The Sewing Labs and build their own business. Let’s give them opportunities to learn the craft.”

Going to class is just one part of the training program. There’s plenty of homework too, but the labs try to help by giving refurbished donated sewing machines to students who need them so they can get the practice time they need. Donations of fabrics, notions and anything you’d need to sew help with all the labs’ projects.

Right now, they run two groups per year of the 30-week program, but they’re hoping to be able to increase that to three in the future.

The opportunity has made a world of difference to Jen Thompson. While walking to her polling place in the neighborhood, she saw a sign advertising the labs’ mask kits, which contained all the materials for someone to make a set of 12 masks to donate.

At that time, she’d been selling items on eBay to make money and was looking for a change. Making masks was her first connection to the program. Once things started opening back up, she joined the sewing salon training program.

“Just the environment there is really welcoming, and I really liked that,” she says. “…With The Sewing Labs, it’s really focused on building communities. It’s just a different feeling than any other place I’ve been a part of.” 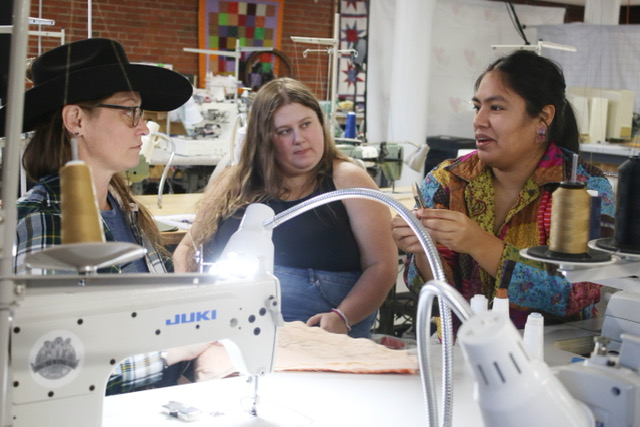 Sewing on an industrial level is a different kind of challenge, one that your average home stitcher might not be prepared to handle.

“The machines we were working on, they sew really, really fast, so you have to learn how to handle the fabric. Another thing we learned to do is how to time yourself. … We did a lot of time studies, which was really great and also really challenging,” Thompson says.

She liked that the labs made the program an easy choice for people.

“It’s really flexible too. They had an option of doing evening classes, so you could during day and get through program with a full-time job, which is nice,” Thompson says.

That training allows students like Thompson to hit the ground running, an attractive quality for employers.

Thompson graduated from the program last November and on the strength of her training, got a job at Fabri-Quilt in North Kansas City.

“It’s kind of a creative job, a very flexible job, but I’m working full-time there, and I have a career,” she says.

Thompson hasn’t forgotten the leg-up she got from The Sewing Labs. Now, she teaches classes there herself on the long arm quilting machines.

“I think The Sewing Labs has really shown me the real the thing people talk about when they talk about building community,” Thompson says. “I never knew what that meant, but it really has helped me grow as a person, as an individual, to be a part of The Sewing Labs, on top of all the other success in terms of having a job and supporting myself.”

Even if you aren’t a sewing pro like Thompson, the labs can use your volunteer time. Anything from rolling fabric to designing a website or crafting slick social media is on their wish list for volunteers.

For more information on taking classes or volunteering, visit their website.